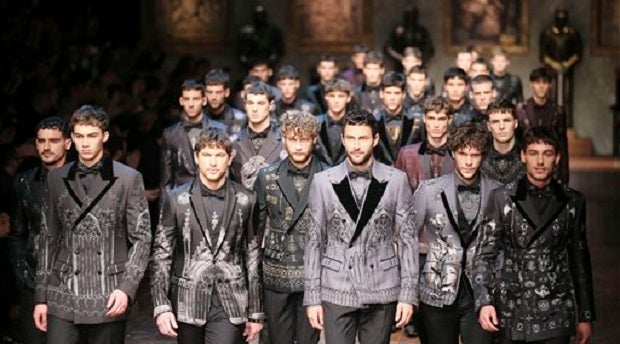 The cold weather looks previewed on the first day of Milan Fashion Week on Saturday took their cue from Medieval courts after the Norman conquest of Sicily, the designers’ eternal muse. Fabrics and yarns were warm and wooly, colors dark and royal.

In Domenico Dolce and Stefano Gabbana’s Norman court, the king wears a thick, sturdy top bearing the image of a king, perhaps a treasured predecessor, over slim-fitting trousers. Bejeweled gloves, slippers and, of course, a golden crown, finish the look. For a tour of his lands, there is a heavy sheepskin coat.

The knight wears a knitted wool cap is embroidered with sparkling studs to mimic chain mail, over a furry gray jacket and strapped ankle boots.

There was a traveler in heavy boots, overcoat and backpack looking for a place to set down his load for the night. Once found, he might pull out a pair of printed silky pajama bottoms or boxers. For sure, this hearty character sleeps topless. And the court jester, no fool, gets a tailored look with narrow pants, sometimes velvet, made of striped panels in royal red, gold, silver, black and blue.

While Dolce and Gabbana clearly had fun with the collection there were also serious, tight-fitting suits — many carrying images of knights, kings and the churches they built.

The designers’ theater was decorated as a Medieval hall decked with portraits of monarch, knights’ armor and velvet upholstered chairs. Metal chandeliers offered only faint illumination to the runway of wooden planks. The only thing missing was a falcon.