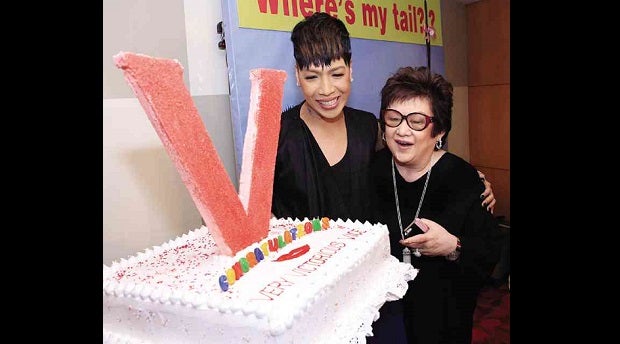 We knew it would be a special screening, with special popcorn and special gig cooked up by the fave “tita” of local celebs, Swatch’s Virgie Ramos. But we didn’t know that the movie would really be extra special.

Vice Ganda’s “Girl, Boy, Bakla, Tomboy” was a good, fun movie, as it turned out, even for the non-MMFF followers from the lifestyle set. It was worth the trip to My Cinema at Greenbelt 3 on a Monday night—an almost literally last-minute idea of Ramos, not because Vice Ganda is a Swatch endorser (he is not). Rather, it was because Ramos has always been a Vice Ganda fan.

She has always loved watching him perform, especially his funny lines, and even his singing voice. (He sang in her private Christmas get-together.)

But since Ramos hadn’t yet seen the movie, she thought of inviting friends over, led by Derek Ramsay and Martin Nievera, with Rowell Santiago mounting pre- and post-screening fun games.

Vice was girl, boy, bakla, tomboy in the movie. He delineated all four characters credibly, accurately (down to the laughable faux glam nuances of an “it” girl), but also with poignant humanness.

For, indeed, even if the movie was hilarious—with a punchline coming every few seconds—it wasn’t all fluff. It brimmed over with life’s ironies.

The movie opens with Maricel Soriano giving birth (rushed to the hospital wing of the Mental Hospital—how ominous is that?) to quadruplets. She’s married to a rich Joey Marquez (in the opening scenes he looked so funny in his “long hair”). All fine, except the wicked mother-in-law has a wicked plan.

The quadruplets are separated soon after birth, with a pair growing up in affluent California with the dad, and the other pair in rural Philippines with the mom, a childhood that came with carabaos in the fields.

From that point on, life becomes a sitcom/Kardashianesque reality show for the quadruplets.

Apart from the substance, Vice fleshed out the quirky style of each character. Style, and how. But then all four, I noticed, wore the same (MAC) pink lipstick, in varying gradations of fuchsia. (See related Q/A.)

Vice piled on the style statements, from animal prints to leather separates to boots. The movie was visual entertainment as well.

There was not a somber member of the select audience as the credits rolled at the end of the movie. We in lifestyle so loved the parody of our style selves. That wasn’t Virgie Ramos’ intention, or was it? Thelma Sioson San Juan