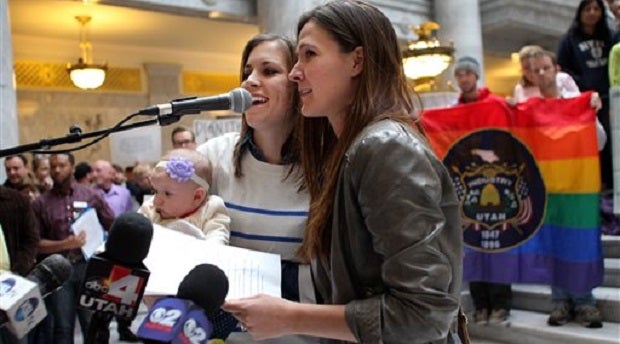 US sides with same-sex couples in Utah

SALT LAKE CITY — Gay couples in Utah have experienced a helter-skelter wave of emotions over the last three weeks: They were suddenly allowed to marry, then saw the weddings stopped by the U.S. Supreme Court and were told the state wouldn’t recognize the unions.

Now, the federal government has intervened and said it will recognize their weddings.

The announcement Friday by U.S. Attorney General Eric Holder that the government will honor gay marriage in Utah marked the latest strong show of support for same-sex weddings from the Obama administration. The action means that more than 1,000 same-sex couples who were married in Utah in the last month can file federal taxes jointly, get Social Security benefits for spouses and request legal immigration status for partners, among other benefits.

Gay couples rejoiced over the news.

Seth Anderson and Michael Ferguson were the first gay couple to legally marry in Utah, and they were thrilled at the thought of having the same federal benefits as straight couples. They plan to file their taxes jointly because of the change.

“Our apartment burst into celebratory anthems of Cher and Beyoncé,” said Anderson about his reaction to Holder’s statement. “It is a great feeling to know the federal government stands with us, especially in a state that has for years tried to exclude us.”

A federal judge overturned Utah’s ban on same-sex marriage on Dec. 20, and hundreds of couples got married in one of the most conservative U.S. states where more than 60 percent of the population are Mormons. The U.S. Supreme Court put a halt to the weddings until the courts sort out the matter. Utah then declared it would not recognize the weddings, but would allow couples to continue to receive whatever benefits they had obtained before the high court ruling.

Utah leaders reiterated on Friday that the state would not recognize same-sex weddings, meaning couples can receive federal benefits but are limited at the state level. The Mormon church, which has its world headquarters in Salt Lake City, weighed in again Friday, instructing local leaders that same-sex wedding ceremonies and receptions are prohibited in its temples and reiterating its belief that homosexuality is not condoned by God.

But for same-sex couples who have experienced a wave of emotions, the show of support from the federal government turned a rally at the Utah state capitol into a raucous celebration.

People held signs that read, “Two moms make a right,” ”Love is love” and “Marriage is a human right — not a heterosexual privilege” and “We are Family” played through loudspeakers.

Laura Fields, who retired from the Air Force in 2006, said her new wife can now get a military identification card that will allow her to take advantage of benefits offered military spouses, such as health coverage and access to commissaries and exchanges on a nearby base to buy food and household items at a discount.

Until now, Fields said she has had to carry an extra insurance policy to cover her partner of five years. They live in a small city outside Hill Air Force Base in northern Utah and married on Christmas Eve.

“It has a real effect,” Fields said. “Legal limbo hurts.”

President Barack Obama welcomed Holder’s decision, said White House spokesman Jay Carney. He said he didn’t know whether Obama specifically discussed the issue with Holder before the decision, but added the president has publicly expressed his support for same-sex marriage and equal rights for all Americans. Obama declared his support of gay marriage in May 2012.

Holder’s decision came days after Utah officials said they would not recognize the marriages. The office of Gov. Gary Herbert told state agencies this week to put a freeze on proceeding with any new benefits for the newly married gay and lesbian couples until the courts resolve the issue.

The Denver-based 10th U.S. Circuit Court of Appeals will consider the long-term question of whether gay couples have a right to marry in Utah. The state’s voters approved the ban in 2004.

On Friday, the Mormon church issued another statement that explained its beliefs on gay marriage.

“Changes in the civil law do not, indeed cannot, change the moral law that God has established,” the statement said. “God expects us to uphold and keep His commandments regardless of divergent opinions or trends in society. His law of chastity is clear: sexual relations are proper only between a man and a woman who are legally and lawfully wedded as husband and wife.”