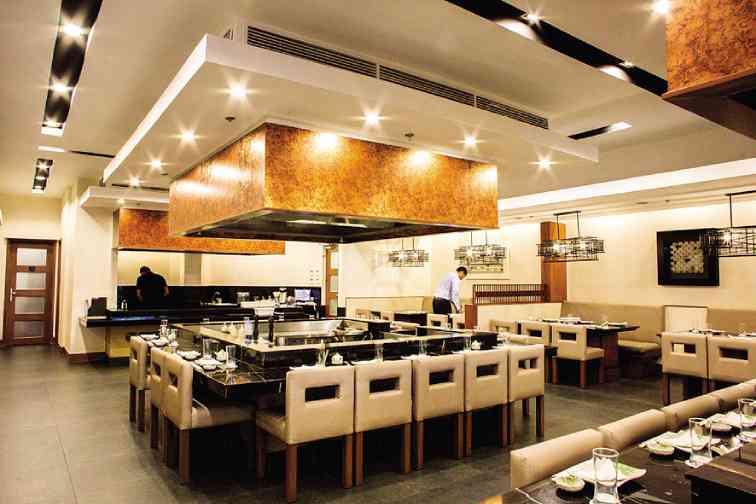 Foodie and businessman Vicvic Villavicencio has come a long way since he first opened the first Saisaki Japanese restaurant in the mid-1980s. In fact, one could say that with the recent opening of Ogetsu Hime at the fifth level of SM Aura Premier, he has come full circle.

Like Saisaki before it began offering a buffet menu, Ogetsu Hime is an a la carte restaurant specializing in sushi rolls, sukiyaki and teppanyaki. This time, however, it is Villavicencio’s son VJ steering Ogetsu toward a market that recognizes high-quality ingredients and is willing to pay for them.

“When we opened Saisaki in 1985-86, there were few Japanese restaurants then and most of them were very small, consisting of just a glass counter and a few tables and chairs. I also remember that most Filipinos were unfamiliar with Japanese food and could not imagine willingly eating raw fish,” Vicvic told Inquirer Lifestyle recently.

Now, Japanese food is widely popular among Pinoys young and old. VJ’s two school-aged sons, for instance, eat raw seafood and can tell whether the fish served to them has been

“They’re very vocal about what they want, and can eat what the adults in the family eat. Of course, it helps that they were exposed to different kinds of cuisine at a young age,” VJ said.

The local restaurant industry is vastly different from what it was three decades ago. Restaurants serving mainly ramen or katsu have sprung up and are patronized by diners who now consider themselves experts on noodles and panko (Japanese breadcrumbs).

VJ is in charge of the menu at Ogetsu, whose three specialties are the sushi rolls, sukiyaki and teppanyaki. Together with the company’s longtime Japanese chef, Isao Takada, he has come up with half a dozen sushi rolls that are different from the traditional rolls Vicvic has seen fit to include in the menu.

“I wanted to attract the younger crowd who might be more interested to sample rolls that can include anything from tempura-fried soft shell crab and bacon to roasted bell peppers and halibut,” VJ said.

“I was so excited to experiment with different ingredients and sauces that chef Takada had to tell me that some of my suggestions were impossible,” he added. “However, I always made it a point to include at least two traditional Japanese ingredients in the rolls.”

Food for all ages

Meanwhile, Vicvic made sure that there would be California roll and Spicy Maguro roll in the menu. “I wanted Ogetsu to cater to all ages,” he said. The restaurant has been open barely a month ago, but the strategy seems to be working.

On one Saturday evening, it was filled with elderly couples having an early dinner. Later, a dozen high school girls came in and occupied one of the teppanyaki tables.

VJ is proud of the quality of the meat at the restaurant. They carry the world-famous Matsusaka beef of Japan, but the US Wagyu, Ogetsu Prime Rib Eye, US Rib Eye and US Tenderloin

For diners ordering Beef Teppanyaki, he recommends that it be cooked medium rare with little or no sauce at all, and maybe just a dash of salt and pepper.

Those who prefer fish can choose from the Seafood Teppanyaki menu that includes Gindara, Norwegian Salmon, Mahi Mahi, prawns and US scallops.

Not a one-dish meal

First-timers, however, should try the sukiyaki at Ogetsu that is not served as a one-dish meal. “Sukiyaki is a celebratory dish,” VJ said. “Unlike other restaurants that serve everything—beef, vegetables, mushrooms and raw egg—at once, we serve the beef first after it has been poached in broth.”

Guests are then instructed to dip the beef in the raw egg before eating each piece. After the guests have eaten the beef, the vegetables and broth are served.

“I’d like to think that what sets us apart from other Japanese restaurants operating today is the quality of our produce and ingredients,” VJ said. “We are also reasonably priced at roughly 30-percent less than what you would spend for a similar meal at the Japanese outlet of a five-star hotel.”