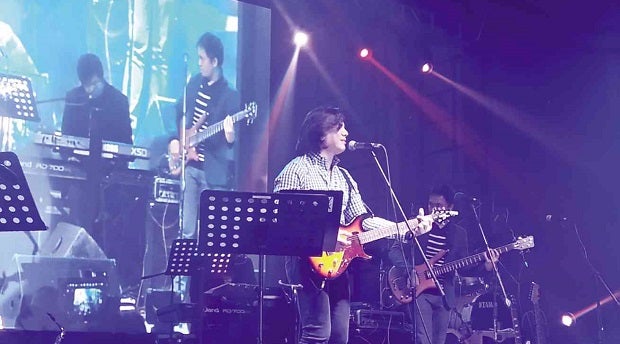 SIDE A. POCHOLO CONCEPCION

The best things in life are free

The scene at the Solaire lobby in Parañaque resembled those from the Martin Scorsese film “Casino”—people huddling at gaming tables, pretty ladies assisting guests, security men surveying the proceedings.

Playing at Solaire’s slot machines, by the way, comes with free beer.

Upstairs at the hotel’s grand ballroom, a free-flowing good vibe bounced off the walls, coming from the stage. A live performance was in progress, a benefit concert for Supertyphoon “Yolanda” survivors dubbed “Pag-asa sa Pag-gising.”

Three bands were on the bill—Freestyle, South Border and Side A, all of whom waived their talent fees to make raising the funds for the beneficiaries stress-free.

Even Solaire management allowed free use of the ballroom.

“When we first talked about this, I told [Freestyle and Side A manager] Celeste Pacana that everything has to be done for free,” South Border manager Sharon Inductivo told Inquirer Lifestyle. “Thank goodness, nobody raised a fuss.”

Sharon’s sister, independent music promoter Wing Inductivo, helped out by contacting family friend and makeup maven Bambbi Fuentes, who readily agreed to provide services to the concert at no charge. (Wing said that Bambbi played in the casino after the show and won P5,000.)

The only expense that was necessary, Sharon pointed out, was the lights and sound system to be handled by Ricky Ramos. And yet Ricky did the project a big favor by billing his services for a minimal P20,000.

Tickets were priced at P1,500 and P1,000 at the 1,000-capacity ballroom. A few hours before showtime, Sharon said tickets were sold out.

The show itself was remarkable for the artists’ heartfelt performances. Freestyle, still with founder Tat Suzara on guitar and currently fronted by vocalists Ava Santos and Mike Luis, highlighted its set with a rousing version of “Empire State of Mind,” with Joshua Desiderio (vocals, keyboards) rapping Pinoy lyrics that exhorted the country to rise from the rubble of disasters.

There was smooth transition in the sequence of performers, such as when Side A quietly climbed the stage and joined South Border on “Change the World” and “Love is the Answer.” Side A frontman Joey Generoso worked up the crowd as the band played “Hold On” and its version of “Ang Aking Awitin.” By the time guitarist Leevon Cailao took lead vocal chores on “Tuloy Pa Rin Ako,” the crowd had stood up to dance.

“Pag-asa sa Pag-gising” grossed over P1 million. Sharon said she wants to personally bring the proceeds to Tacloban and turn them over to a family friend and prominent businessman in the city, who would know best how to properly use the money for the storm survivors.

There are two more Yolanda benefit concerts this week: “Do You Hear the People Sing” on Jan. 29 and 30 at Resorts World Manila’s Newport Performing Arts Theater; and “Heal Our Land” on Jan. 31 at the Mall of Asia (MOA) Arena.

“Do You Hear…” features music from “Les Misérables” and “Miss Saigon,” among other musicals; it stars Lea Salonga, Australian singer-actor David Harris, French soprano Marie Zamora, the ABS-CBN Philharmonic Orchestra and a 100-member choir. All artists are said to be performing for free.

The concert’s promoter, Doy Bitanga, told Inquirer Lifestyle that the benefit got rolling when his friends, Benoit and Filipino-American saxophonist Paolo, offered their services for free. “It got to a point that I was receiving calls from high-profile artists from the US and Europe,” Doy said, adding that Earl Klugh, Al Jarreau and Sheila E. also wanted to join but couldn’t do so due to prior commitments.

The charity event presents a good opportunity for those planning their nightlife on Jan. 31 to enjoy world-class jazz, R&B, rock and pop while helping out the Visayas.