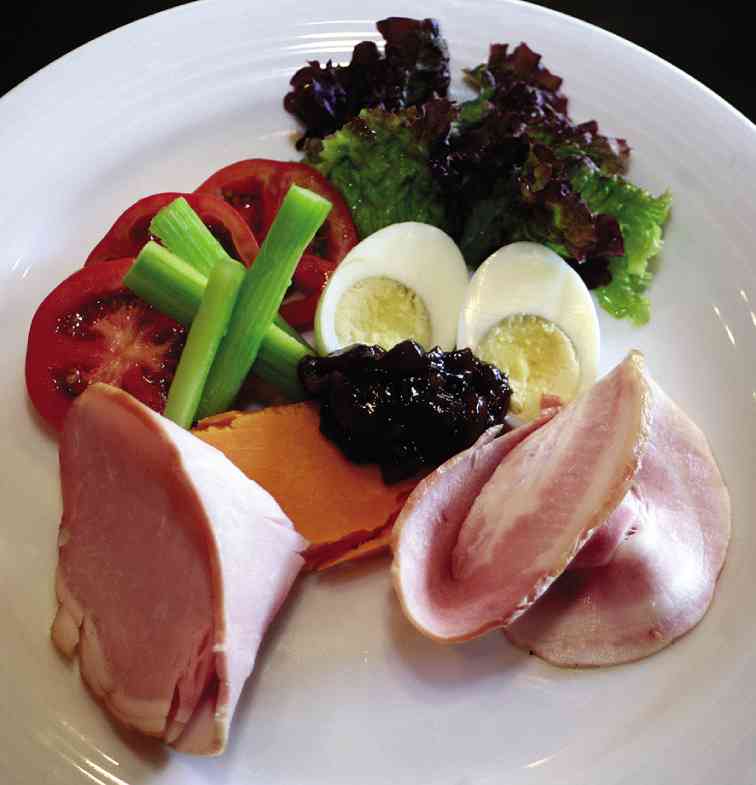 There’s more to British food than fish and chips. As part of its “This is Great Britain” campaign, a five-month festival celebrating all that’s best

about the country, the British Embassy in Manila has partnered with four of Metro Manila’s leading hotels to promote British cuisine.

Dusit Thani, Edsa Shangri-La, Mandarin Oriental and InterContinental have their offerings during the “British Food Month,” which runs until Feb. 9.

While others have chosen to offer British gourmet food either à la carte or as part of the buffet, Alisdair Bletcher, the InterContinental’s executive chef, has done the opposite by serving only classic British “pub grub” at Gambrinus.

“When I sat down to work on the menu, it was either I go classic and simple or British gourmet,” said the Scotsman. “In the end, I went for real and simple because British pub food to me is classic British food.”

But items on the menu are anything but small, unattractive and salty. Guests were pleasantly surprised by the huge servings.

“Most of the items are best taken with beer or apple cider,” said Bletcher.

Starters, which include Prawn Cocktail and Ploughman’s Platter (a huge plate consisting of cheddar cheese, bone ham, hardboiled egg, tomato, celery and Branston pickle), go well with Gambrinus’ alcoholic and nonalcoholic beverages from Ireland and the world over.

“For some reason, we were unable to get any British beer,” said Bletcher. “But the choices we offer are quite extensive and very good.”

Apart from the classic Fish and Chips served with Mushy Peas and Malt Vinegar, items on the main course include Steak and Onion Pie with Mushy Peas, Ham, Cheese and Onion Quiche with Garden Greens, and Shepherd’s Pie.

For Fish and Chips, the chef uses parrotfish. Local fish varieties such as maya-maya and lapu-lapu are also ideal alternatives.

“Almost any white fish will do,” he said. “You can even use salmon for fish and chips. But I didn’t because it’s an oily fish and its texture and color are different.”

Bletcher purposely didn’t include Steak and Kidney Pie, another British staple, on the menu because innards, he conceded, are an acquired taste. He was sure that its likely appeal among Filipinos is quite limited.

He attributes the relative unpopularity of British food compared to French and Italian cuisines to the fact that “we probably just ate the wrong things.”

“Our produce has always been good,” he said. “But there was a time in the ’60s and ’70s, perhaps out of convenience, when we ate a lot of fried food like bacon, ham and eggs.”

Traditional British food, he said, is more about home-style comfort food like roast beef, lamb or pork and Yorkshire pudding. But the situation has changed a lot since then.

Because of experience and exposure to various colleagues from the world over, including the French, a growing number of British chefs have earned Michelin stars.

Apart from the growing number of dining options available to them, British consumers have also more choices when it comes to shopping for ingredients. Marks & Spencer’s and Tesco, for instance, offer a huge variety of delicious ready-to-eat meals.

“You just toss them in the microwave and you’re good,” Bletcher said. “A lot of families are doing that. It’s okay once in a while. I’m not condoning it. People should cook, gather around the table, sit down and savor a proper meal.”

The recent influx of immigrants to the UK from all over the world, particularly from South Asia and Eastern Europe, has also enriched British cuisine. A typical Indian dish like chicken tikka, for example, has evolved into chicken tikka masala, a homegrown British dish.

Bletcher also drew parallels between British and Australian dishes, which were once upon a time quite similar.

“Australian and British food were closely linked because Australia was very much part of the Commonwealth,” he said. “At one stage, it was very much controlled by Britain. Then Australia had this massive influx of immigrants from various countries. As a result, the food there is now sensational.”

But Bletcher was also quite realistic about British food’s chances of breaking into the mainstream food scene as far as Filipinos are concerned.

“British food will be famous here only in sports bars,” he said. “It’s generally drinking food. It’s not really food you sit down to.”

Then again, Bletcher, who hasn’t lived in the UK since 1985, may be wrong. Just like Australian food, British food is probably morphing into a world-class cuisine befitting a small but influential country with a global presence.