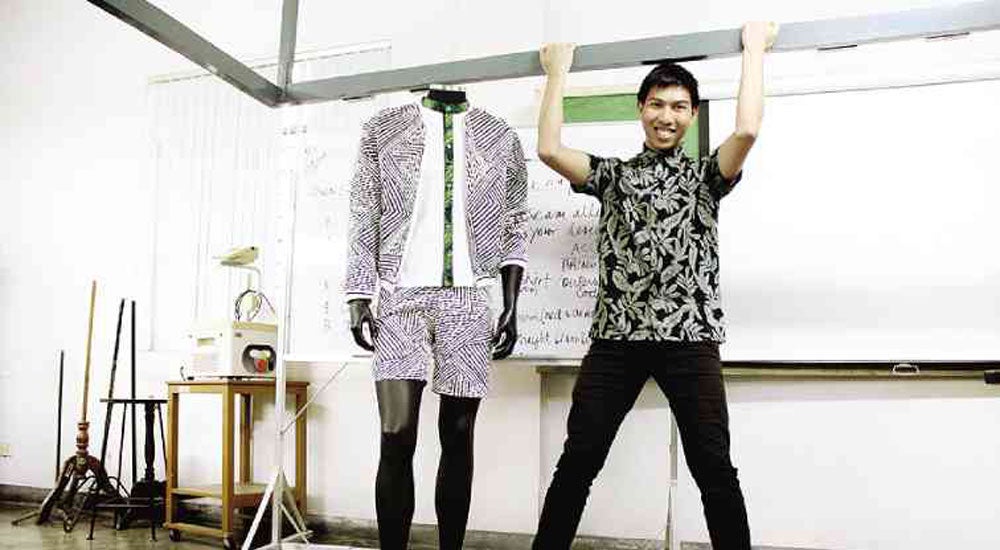 THE DESIGNER with one of his men's wear creations. PHOTOGRAPHY ADRIAN GONZALES

The problems we have in life are not always due to other people. Sometimes, we ourselves are the ones creating the problems. They become problems because we are afraid to fail or disappoint people.

That’s one of the things Gelo Salanga learned before responding to his calling to become a fashion designer.

“My personal icon is Tom Ford.  There’s a parallelism between what I wanted to be and Tom Ford’s success,” says Salanga, a senior BS Clothing Technology student from the University of the Philippines (UP) Diliman.

Salanga is a timid but calculating individual. He may not be the talkative type, but he speaks with substance and eloquence. These are the same traits that characterize luxury brands. They have substantial backgrounds that speak for the product’s great quality.

“He has a very controlled point of view; that’s his brand,” says Salanga admiringly of Ford.

Aside from Salanga’s love for fashion, this aspiring luxury brand designer wants to direct films as well. He admits to making films in his free time. He compares directing films to building and controlling the visual aspect of a brand’s campaign.

“When I’m doing a film project, it’s like making a brand. I’m creating a whole look. I’m foreseeing how it’s going to come out in a lookbook, the whole scenario,” he adds.

One of his style influences is his mother. In fact, it was she who inspired him to get into fashion. “When I was young, I always used to watch her dress up, and then I would ask, ‘Ma, bakit yung lipstick mo kakulay ng bag mo and shoes mo?’ She would answer, ‘They need to be color-coordinated.’”

This made him wonder about the process of being beautiful, and inspired him to learn more about it. “There’s something ritualistic about it,” he says.

With such an interest, one wouldn’t think Salanga encountered problems with his college course and career path. He admits that he is his own biggest critic.

He isn’t afraid to say that his sexuality has become an open secret with his family, and they accept him for who he is, which was why his mom was surprised when he didn’t take a fashion course.

He also didn’t take a design course because he didn’t want to fail the expectations he thinks his parents had for him. But then, he realized he was the one who kept himself from the fashion growth that he deserves.

Looking through the runway photos of UP Clothing Technology’s graduation class of 2014, one sees Salanga’s collection, “Vectorial Arcadia.” It is his play on creating streamlined silhouettes, combined with a Japanese minimalist aesthetic to produce a 10-piece resort wear collection.

His bright idea of incorporating tailored looks into the usual obligatory flowing dresses and tops is a genius take on resort wear. “The collection is called ‘Vectorial Arcadia’ because I was trying to experiment with geometric shapes,” he says. “I’m very much into monochromatic. I have this vague, abstract idea of a black-and-white collection. Very Japanese.” He describes his muse as a girl who is very sophisticated and independent: “She’s assertive, and an adventurer. She has classic taste.”

Salanga admits that he doesn’t want to just create bespoke clothes. He wants to build his own branded empire and to leave an imprint for the next generation. “My goal is to have a high-street luxury brand, not the custom-made ones, because I’m creating the look for the brand instead of customers telling me what they want. I find it too much of a responsibility to personalize things.”

This allows him to oversee and deliver the needs of majority of his target market, women, and still be in touch with his creative prowess. This liberates him from dealing with the nitty-gritty of having to personalize everything and give in to the client’s every need.

Even if Salanga is 100-percent focused on becoming a luxury designer, his strength might also be his downfall. Giving his full attention to what he sees in the market might make him overlook the needs of his ideal clients. But he is willing to learn.