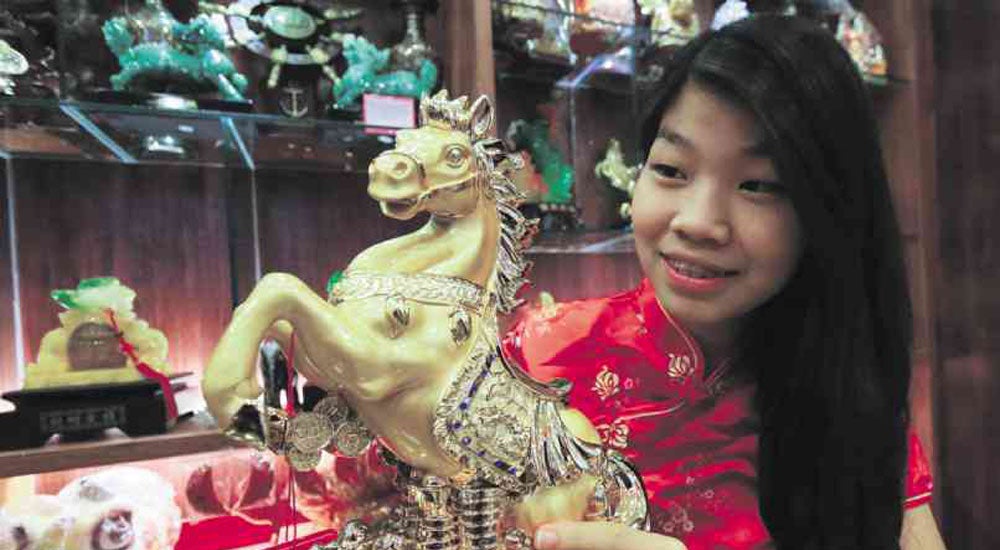 LUCKY CHARM An employee of Phoenix Dragon Feng Shui Store is about to put a statue of a horse on a shelf with other lucky charms. According to the Chinese zodiac, the incoming year is the Year of the Wooden Horse, which makes its galloping entrance at 5:38 a.m. Friday, Jan. 31, 2014. ALEXIS CORPUZ

This is the second year of the dawning of the Age of Aquarius, which culminates in the year 2032. It will be recalled that many doomsayers had predicted that the world would end on Dec. 21, 2012, the last day of the Mayan calendar. Obviously, the dire predictions did not come to pass, for the reason that Mayans never claimed the world was going to end physically.

The inscriptions simply read that 90 gods were going to descend on earth. In numerology, it simply meant spirituality and universal love would begin to reign on our planet. So be it.

Let man’s spirituality expand and may it go beyond the bounds of religion—the main cause of men going against each other in the name of God.

Let all people realize that the God they have revered for thousands of years can be found from within.

The Wooden Horse proclaims that progress, modernity and unsentimentality will reign in his year. He throws out the old and happily welcomes the new.

Many changes are to be expected, for the horse’s imagination will come up with innovative inventions and will not hesitate to indulge in the unconventional.

He is always responsible and will never slack in his commitments, even as he explores other fields and other horizons. The very sanguine horse has never heard of nonactivity for he does not have a single lazy bone in his body.

The Year of the Wooden Horse will truly be high-spirited, active and lively for all. It will be a year filled with adventure and movement, delightfully delving into new ways and practices. Note that the pace can turn out to be extremely hectic.

No matter what happens, though, this is surely a year of advancement. Everything will be done at high speed yet with efficiency. Corporate projects will abound. It could prove to be an exhausting year for those who do not know how to pause, refresh and relax in mind and body. We recommend a lot of meditation and contemplation.

Procrastination does not belong to the Year of the Wooden Horse—not with the impulsiveness and extreme self-confidence of the horse of wood.

The world economy will turn around and go bullish. It is a boon to industry. For those who want to strike it out on their own, this is the time to do so. Money matters truly matter during this period.

Elegance and grace will be the key words for fashion and for the theater and there will be super-productions like no other.

As we all know, there are five types of horses: the metal, the wood, the fire, the earth and the water. The friendliest, the ever patient, cooperative and the most largely reasonable one is the wooden horse.

Because of the horse’s happy disposition, we can expect a lot of socializing and entertaining, not to mention traveling.

This is what the horse has to say: Be brave, be bold, be shocking.

This author has composed a prayer for the second year of the Aquarian Dawning for those who need encouragement and empowerment. This little prayer, which would go a long way in boosting their morale, is best recited daily—at the start of the day and before retiring in the evening. The prayer may be viewed on YouTube under the title, “The 2nd Year of the Aquarian Dawning.”

This prayer, when shared with as many people as possible, will help create a happier and more fulfilled world. It should bring blessings beyond one’s fondest expectations.

How would the different animals fare in the Year of the Wooden Horse?

Horse: Fantastic year for the horse. A lot of recognition and promotion can be expected. Plans are realized effortlessly and easily. Must not visit sick people due to physical sensitivity and susceptibility.

Sheep: Very smooth and tranquil year. No major challenges at work or at home. It is suggested that he take control behind the scenes and overcome obstacles he may find in his path. Some problems in the past turn out to be a blessing.

Monkey: If only the monkey would stop worrying incessantly, he would realize that all his difficulties will work themselves out. He must not rock the boat. Instead, he must look for ways to lessen his expectations. Cooperativeness and keen observations are expected of him.

Rooster: Do not expect too much too soon. Things will turn out better quickly when the rooster, at work, employs diplomacy and plays politics for a while. Good year with the family. Lots of loving and caring.

Dog: A year of progress and expansion for the dog. Real financial gains are indicated and will be at the peak of its power and good fortune. Lots of traveling are indicated.

Pig: A very good year for the pig. But he must put aside uncertain speculations. Blessings and benefits, once withheld, will now come from all directions. Prosperous and fortunate year at work and with family.

Rat: The rat must practice conservatism this year in assessments and business commitments. But remember, too, that the rat never goes hungry. He always knows where the supply is and never wastes his time to get his share.

Ox: Although the first half does not look as promising as the second half, leave it to the ox’s perseverance to overcome any challenge. The ox has the strength and the will to succeed at all times. So do the Capricorns.

Tiger: Wonderful and happy year for the tiger. Things go very smoothly throughout the year with money coming in from all directions. Even in the home front, there are reasons to celebrate.

Rabbit: A very good year for the rabbit for he will be meeting people who will only be too happy to use their influence for the rabbit’s benefit. This is the time to recoup pass losses of any kind. Lots of travel and entertaining are indicated.

Dragon: The mythical dragon faces both real and imaginary challenges this year. However, the dragon has the inner resources to overcome any form of challenge. He is not the so-called magical dragon for nothing.

Snake: A year filled with energy and enthusiasm. However, he must avoid being too hasty (it does make waste) and he must put a check on his emotions if he wants all his goals to be fulfilled. The snake will do admirably this year.

For additional insights, one can combine the Western and Eastern signs as indicated below:

Take President Aquino, who was born in the Year of the Rat. Being born on Feb. 8, under the Aquarian sign—the equivalent of which is a Tiger in the Eastern zodiac—he could read both the Rat and the Tiger to get a more extensive version of what’s in store for him in the Year of the Wooden Horse.

(Editor’s Note: The writer is a life coach and the author of the bestsellers “A Miracle Awaits You” and “Feng Shui of the Mind.”)