Out on a limb while having fun | Inquirer Lifestyle ❮ ❯ 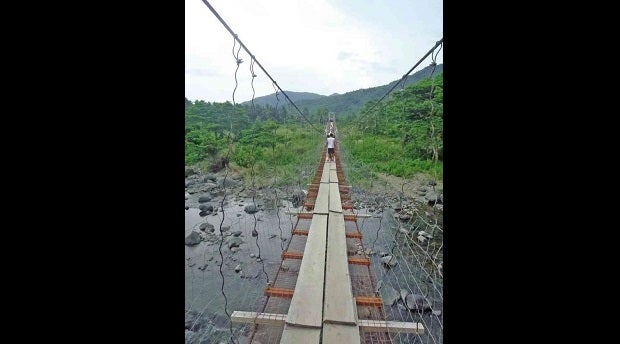 Out on a limb while having fun

They say travel gives you perspective.

Surely you’ll get some, even if you’re not the outdoorsy type, but have gone anyway on a 10-hour boat ride to and from a remote island-town, twice crossed a 500-meter hanging bridge, and hiked and navigated tracks of land with armed military escort.

But this is not a story of a trip gone awry. It is about taking one’s wanderlust a step further, going out on a limb for reasons other than to guzzle beer and sunbathe on white-sand beach, or succumb to budget-busting leisure activities.

Any expense and effort we put into two local trips last year were invaluable. We went to Zambales and Aurora provinces in excursions organized by our company’s outdoor club, led by its indefatigable officers, editorial assistant Jodee Agoncillo and computer engineer Lee Elgincolin.

Before the R&R, each trip began with the delivery of desktop PCs, schoolbooks and supplies to towns geographically cut off from their provincial capitals. Locals offered so much hospitality and gratitude that it felt like the preowned donations, from the company, our colleagues, friends and the group’s own resources, were precious cargo.

In Zambales, we hopped onto bancas with the cargo and trekked 10-15 minutes to reach San Salvador island’s elementary and secondary schools.

After the school visit, we camped out on Potipot Island for an overnight stay. Meals consisted of seafood, bought from the town proper and prepared by locals who help campers with their grilling and other cooking needs for a minimal fee.

Potipot was small enough to be circumnavigated on foot, an activity worth undertaking after we had stuffed our bellies, or for photo opportunities on and off cool, refreshing waters.

Our second adventure with the outdoor club landed us in Baler, Aurora, where a gregarious San Luis Mayor  Annabelle Tangson greeted us with breakfast, and tales of the land and its people.

Along with an armed military escort, Tangson accompanied us to and from Dimanayat Elementary School, another recipient of desktop PCs, school supplies and books to pad their modest library.

Hats off to the petite mayor who seemed immune to the rigors of the trip, whether it was a long uphill trek or crossing a 500-meter-long hanging bridge.

Tangson goes to the island-town twice a week, via an eight-hour boat ride. Ours lasted about 10 hours, owing to the vessel’s battery which conked out on the way back.

The Dimanayat townsfolk and school administrators gathered in the campus for the hand-over ceremony. But the highlight of our visit was sharing a meal with them, on the grounds of the community outpost.

In a hut, a table was laden with meat, fish and vegetable dishes, yet we were drawn outdoors, toward a large vat of pansit so aromatic it was impossible to resist.

Everybody ate while seated on the grass or a boulder, or leaning against a tree, and sipped coconut juice off of its shell.

Last year’s local-travel experience was our Anthony Bourdain moment, discovering parts unknown the way the celebrity chef does on his CNN travelogue series.

Next week: How to plan your own local trip and give back to the community