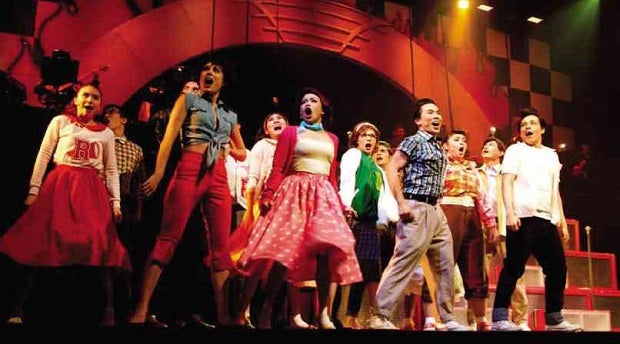 9 Works Theatrical’s production of the evergreen Broadway musical “Grease” in November last year grabbed 13 nods to lead the fourth-quarter citations of the 2013 Gawad Buhay!, the Philstage Awards for the Performing Arts.

Repertory Philippines’ “The Producers,” meanwhile, received 11 citations, among them outstanding musical production and direction (Jaime del Mundo) and nods for the lead performances of Robbie Zialcita and Topper Fabregas, and the featured turns of Audie Gemora, Noel Rayos and Joel Trinidad.

Tanghalang Pilipino’s modern Filipino opera “San Andres B.”, which for purposes of consideration in the Gawad Buhay! awards was classified under the musical category, received 9 citations, while Ballet Manila’s production of “The Nutcracker” had 8.

The Gawad Buhay! jury, an independent panel of critics, scholars, artists and theater enthusiasts, has also decided to open a new category for Outstanding Production for Children (Play, Dance or Musical), to acknowledge the growing number of productions from Philstage companies specifically mounted and designed for such audiences.

All Philstage children’s shows are eligible for outstanding production consideration only in the fourth quarter of the year, since many of them have longer runs that may span two or more quarters, compared to other shows.

Now on its fifth year, Gawad Buhay! is the first-ever industry awards exclusively for the performing arts. Outstanding individual and group achievements in various artistic and technical aspects of play, musical and dance productions and performances are honored based on quarterly citations deliberated by the jury who are required to watch all productions of Philstage member-companies for the entire year.

From the four quarterly citations, the jury will select the final nominees qualified to win the awards by the end of the performance season. Awarding ceremonies will be in early 2014.

COMPLETE LIST OF THE 2013 FOURTH-QUARTER CITATIONS IN VARIOUS CATEGORIES:

Outstanding Choreography for a Dance Production

Outstanding Choreography for a Play or Musical

Female Lead Performance in a Play

Male Lead Performance in a Play

Female Featured Performance in a Play

Male Featured Performance in a Play

Female Lead Performance in a Musical

Male Lead Performance in a Musical

Female Featured Performance in a Musical

Male Featured Performance in a Musical

Outstanding Ensemble Performance for a Play

Outstanding Ensemble Performance for a Musical

Outstanding Production of Existing Material for a Play

Outstanding Production of Existing Material for a Musical

“The Bluebird of Happiness” (Trumpets)