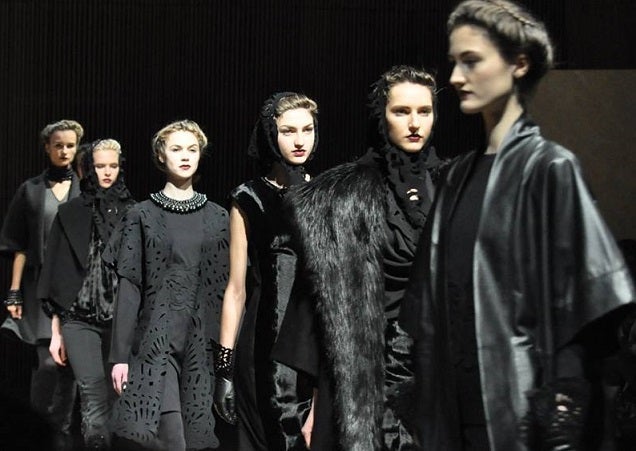 “This season’s collection is inspired by the richness of the Russianculture,” Natori told The FilAm.

My friend, Erno Hormillosa, and I arrived at DiMenna Center in Midtown Manhattan, pants dripping at the cuff. He offered me a fresh pair of socks, but there was no time to change. The show would begin the minute after we found our seats. After slogging along through Midtown, we joined fashion luminaries, editors, stylists and buyers who braved the slushy roads to preview Natori’s breathtaking — and should I say timely — collection.

Rich, velvety fabric dominated, with faux fur accents. She showed us how the costumes contained the modernism of the ’30s and the embellishments that Natori designs are known for.

“We have laser cuts, the beading is very clean, very sculptural and very dramatic,” she explained.

a special location: the DiMenna Center for Classical Music, home of

the Orchestra for St. Luke’s, where she sits on the board.

Natori, who was a Vice President of Investment Banking at Merrill Lynch before she opened her lingerie line more than 30 years ago and expanded into fragrance and eyewear, plays the piano.

“The House of Natori collection for this season introduces a new perspective on the romantic idea of Russia…with the transcendence of timeless folkloric themes into a modern identity,” says the press handout.

Erno, a director of fashion shows, shared his thoughts. “The first thing I noticed before the first model appeared on the runway was the choice of music,” he said. “It’s from Tchaikovsky, and it complemented Natori’s collection.”

He continued: “The designs are architectured with a touch of Asian influence, which make them so pleasing to watch.”

Erno likewise noted that a piece of jewelry worn by one of the models appeared to represent jewelry typically used by Russian royalty.

“All the clothes are wearable. The two-toned velvet and faux fur coats are a winner especially to those who are on budget,” he said. “Another interesting accessory is the arm-length gloves made of leather with a lacy pattern. I’ve never seen anything like it.”

“The traditional forms and ornate embellishments found in Russia’s rich culture were particularly influential to me this season,” said Natori. I love to reinterpret ancient motifs for the modern woman and share my love of everyday opulence.”