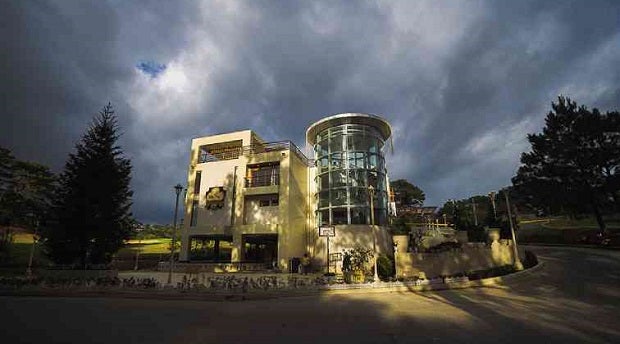 Why Joel Cruz mansion is controversial

CAMP John Hay—Anyone visiting this former US hill station in Baguio City would have difficulty missing the controversial mansion owned by eccentric entrepreneur Joel Cruz aka The Lord of Scents.

At four stories high, it dominates the skyline of the camp’s fairway.

Golfers treat the beige glass-and-concrete structure as an unwelcome and distracting sentinel out to ruin their game.

Baguio’s old-timers and camp regulars shake their heads when they drive up from the Mile-Hi Center, the camp’s version of a strip mall, as they see the mansion loom from a distance.

“It’s tacky and it’s gaudy. And thoroughly out of place in the wooded environment that is Camp John Hay. We, the citizens complained. [Authorities] said they would take [the complaint] into consideration and I understand the monitoring group [in the camp] is also against it.  But [our opposition] has gone unheeded,” added Bernardo.

While the mansion’s architecture runs counter to the camp’s log cabin theme, its swimming pool that dominates the ground floor has also raised eyebrows among neighbors.

“Baguio has always had a water problem despite the tons of rain because there is no catch basin. The [camp’s] monitoring group said [the water for the pool] cannot come from the main line of Baguio City. [We later learned the water] came from the line of John Hay because John Hay has its own water reserve,” Bernardo said.

“Why there is a swimming pool in a house in Baguio is totally beyond comprehension.  It’s cold. [The pool] is right there as you drive up where people can see it,” she noted.

House of the Lord of Scents

There is also a glaring sign on the façade, sort of like a coat of arms that announces: “White House of the Lord of Scents.”

“People read it and they laugh,” Bernardo said.

In hushed discussions, blame is heaped on the Camp John Hay Development Corp. (CJHDevCo) for allowing the mansion to exist at all.

Its approval of the mansion’s design and location is required before Cruz could bring in a construction crew.

Inquirer’s Northern Luzon bureau earlier reported that CJHDevCo is owned and chaired by businessman Robert John Sobrepeña who leased over 240 hectares of built-up areas inside the zone in 1996.

The Bases Conversion and Development Authority (BCDA), however, terminated the lease because of CJHDevCo’s outstanding rent amounting to P3.077 billion.

But in a news conference last year, lawyer Arnel Paciano Casanova, BCDA president, said the injunction could not be enforced until CJHDevCo posts a P736-million performance bond.

Meanwhile, a notice is posted on the front door of CJHDevCo’s office inside the camp, announcing that the “BCDA, subsidiaries, officials, employees, agents and other third parties are restrained (on pain of contempt) from committing any act tending to wrest control of the leased property… including forceful occupation and/or ejectment from the leased premises… to any new entity.”

The legal tangle between BCDA and CJHDevCo goes on.

Inquirer Lifestyle visited CJHDevCo’s office in the camp in late January. The staff refused to give any statement on the issue of Cruz’s property, specifically why its construction was allowed despite obvious opposition from stakeholders.

(A female staff member asked for this reporter’s contact numbers, promising that CJHDevCo would issue an explanation. No calls or e-mail were received from CJHDevCo.)

Manila Times columnist Ma. Isabel Ongpin, chair of the Pine Cone Movement, lamented that the architect who designed the mansion should have applied basic architectural principles to make sure the property would not disturb the aesthetics of the surrounding environment.

“Any architect, if they go to the right architectural school, when asked to design something in a certain neighborhood would study first the neighborhood and try to fit their project in it. [The new structure] might become more modern, more efficient [than the older houses] but [it should] not be an eyesore sticking out. That’s the principle of architecture. But there (in Camp John Hay), maski ano,” Ongpin complained.

In Manila, Cruz sits on a wide, open desk made of antique dark wood as he reviews the day’s take of his flagship Aficionado Germany Perfume and its sister companies that make up his fragrance empire.

He works in the penthouse of a coral-colored eight-story building at the outskirt of Sampaloc, in the boundary of Manila and Quezon City, a perfume bottle’s throw away from the street in La Loma that is lined with lechon.

In the building’s lobby, statues of St. Monica, patron saint of battered women, and the Virgin Mary loom at the entrance, while a Sto. Niño icon is on the reception desk.

On one wall hang framed pages of the June 2013 issue of Forbes Asia magazine where Cruz is recognized as one of the “Heroes of Philanthropy” with taipans Henry Sy Jr. and John Gokongwei and architect Felino Palafox Jr.

His beneficiaries are mostly orphans and battered women housed in nearby institutions that Cruz and his employees frequently visit.

Cruz does not fit the template of a businessman at the helm of a big fragrance retail chain. He has straight black hair that grows past his shoulders, wears casual clothes and brings his half-Russian toddler twins to work.

Cruz doesn’t like to talk about his net worth. His assistant marketing manager Roy Redondo would only reveal that the founder and CEO of Central Affirmative Company has 500 company-owned franchises consisting of kiosks and carts in various malls all over the country.

To keep prices down, he uses plastic containers, noting that perfumes that cost between P4,000 to P5,000 in department stores use expensive Italian glass at P700 per bottle.

“People don’t mind using plastic containers. And we have a promo that if you return the plastic bottle, you will have a discount on your next purchase,” Cruz said.

His stores also promise a money-back guarantee to a customer disappointed with the knock-off.

Cruz said what he does is to democratize perfume, making sure that those who cannot afford expensive ones have a choice of products with a scent similar to the coveted variety.

“We Filipinos love to smell good.  That is how I started. Even in high school, I had a passion for smelling good,” he added.

Cruz wonders at the furor generated by the mansion in John Hay, saying it was designed by CJHDevCo’s resident architect Ruben Payumo “who passed away four or five months ago.”

“Everything is above board,” he insisted.

“Before he designed the house, he asked us a lot of questions like how many people would live in it, how many toilets are required and so forth,” Cruz recalled.

The businessman said he is not aware whether Payumo’s design required the approval of a higher authority.

Cruz admitted he was “a bit dismayed” upon reading a previous Inquirer Lifestyle article about the mansion questioning whether it belonged to Baguio’s quaint landscape and plans to challenge the decision allowing him to build too close to the fairway.

The businessman noted that Le Monet Hotel, which is situated nearer the entrance to Camp John Hay, also did not strictly follow a traditional log cabin theme.

“And it has been standing there way before my property was built,” he said.

Cruz added he could not be considered as the property’s sole owner since his seven other siblings chipped in to make it happen.

“There would be nine of us living there. My eight siblings and I and our mother. Each sibling would have his or her own room. The idea was for all of us to get back together again once all the siblings are retired,” he said.

But why construct a mansion right there on the edge of the fairway?

Cruz said the initial plan was to buy a lot “in a cul-de-sac sa may forest area” in 2009 but when he visited the site, his future neighbor whom he only described as “isang Lopez sa Meralco” brought along an entourage of “10 black Expeditions that took up all the parking space.”

Cruz was discouraged at the thought of not having adequate parking space.  “What happens during Christmas or New Year’s or even Panagbenga when disputes could arise,” he asked.

Refusing to be discouraged, the businessman said he eventually saw the property where the mansion now stands.

The attraction? “There are a lot of parking spaces in the nearby (Mile-Hi) mall. It’s required that each property has its own parking. When I have guests, they can easily park somewhere in the mall,” he explained.

Cruz added that the façade generating much talk was the late Payumo’s idea. His unofficial title “Lord of Scents” stemmed from a stint in “Celebrity Duets” where he won as overall champion.

“Every time a singing contestant was introduced, he or she is given a title, maybe to spice things up. Since I am the force behind Aficionado, they dubbed me ‘Lord of Scents’ and I liked it,” Cruz said.

Cruz said he replaced the trees taken out of the site during construction.

Bernardo and Ongpin, in separate interviews, expressed alarm over the reported plan to cut 1,000 old trees inside the camp to give way to a Marriott Hotel.

This is apart from an older plan to cut down 136 trees supposedly suffering from a blight caused by insects.

Ongpin sees Cruz’s mansion as a case study of an even bigger blight raging all over Baguio City that involves big money.

“They just made money so they think they can buy anything. Or have anything they want. I’m not attacking [Cruz] but it’s the mentality,” she said.

Ongpin said Environment Secretary Ramon Paje “privately told” members of the Pine Cone Movement that she chairs “to fight it out because of the plan to cut down 1,000 trees.”

“For the people in Baguio, it’s really painful. I can see it. The people are gonna fight but they’re so tired,” she added.