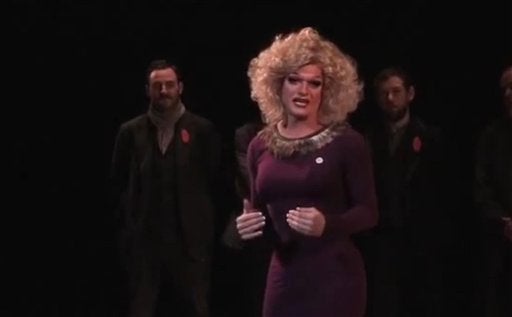 This image made from video taken Saturday Feb. 8, 2014 and made available by Miss Panti Bliss aka Rory O'Neill, shows Miss Panti Bliss making a speech in Dublin. The drag queen of Ireland, Miss Panti Bliss, has driven a stiletto heel through this nation’s long-running debate on gay rights. Panti has become a YouTube sensation in a dozen languages, thanks to a single, celebrated speech on anti-gay prejudice in Ireland. AP

How and why has Panti — a.k.a. 45-year-old Rory O’Neill — become a YouTube sensation in a dozen languages, thanks to a single, celebrated speech on anti-gay prejudice in Ireland? AP explains.

O’Neill has been Ireland’s best-known drag performer for more than a decade, leading Dublin’s annual Gay Pride parades and the Alternative Miss Ireland pageant, performing in nightclubs and, since 2007, in his own pub named the Pantibar. It’s one of of only four gay bars in Dublin — but that’s four more than existed a generation ago in this predominantly Catholic land.

Homosexuality was outlawed in Ireland until 1993, but attitudes have softened in the two decades since, as Catholic authority crumbled under the weight of child abuse scandals. Civil partnerships were legalized in 2010, and a national referendum to permit gay marriage looms next year. All political parties back the move.

On Jan. 11, O’Neill went on a late-night Saturday talk show on Ireland’s state-owned RTE network, and stumbled into a freedom-of-speech furore.

When asked for his assessment of anti-gay attitudes in Ireland, O’Neill said a few Irish newspaper columnists were “horrible and mean about gays.” The host asked him to name names. He identified Irish Times columnists John Waters and Breda O’Brien and a small Catholic lobbying group called the Iona Institute.

O’Neill says he thought he was stating the obvious, since all are leading voices against gay marriage. But Waters, O’Brien and four Iona officials threatened to sue RTE for defamation, arguing they had been unfairly branded as haters of homosexuals.

RTE quickly issued an apology and paid 85,000 euros ($115,000) in damages, mostly to Waters, a board member of the Broadcasting Authority of Ireland overseeing RTE. It said fighting the lawsuit would have cost far more.

Waters, who has described gays’ demand for marriage rights as “a deliberate sabotage of the culture” motivated by envy, resigned his post shortly before the settlement became public knowledge.

Public reaction was swift and critical. Twitter exploded with messages of support for O’Neill under the hashtag TeamPanti.

Ireland’s national theater, the Abbey, invited O’Neill to deliver a surprise speech at the end of the evening performance Feb. 1. He came dressed as Panti, but spoke as O’Neill, for 10 minutes.

With a mixture of humor and indignation, he relayed how he found himself bracing for hurled insults or drink containers when standing at Dublin street corners; sought to appear and sound heterosexual when not performing to avoid harassment; and felt ashamed whenever a friend behaved in an attention-courting camp manner on a crowded train.

“I do, it is true, believe that almost all of you are probably homophobes,” he told the Abbey Theatre audience. “But I’m a homophobe. I mean, it would be incredible if we weren’t. To grow up in a society that is overwhelmingly and stiflingly homophobic and to escape unscathed would be miraculous. …

“But I do sometimes hate myself … and sometimes I hate you for doing that to me.”

Video of his oration has spent the past 10 days atop the YouTube Ireland channel with more than 450,000 viewings, and continues to spread worldwide through social media platforms.

Fintan O’Toole, one of Ireland’s most prominent left-wing commentators, called it the most eloquent speech in Ireland since the days of Daniel O’Connell, who in the early 19th century won the right of Irish Catholics to vote.

The Catholic Church’s senior official in Dublin, Archbishop Diarmuid Martin, conceded that the church did harbor people with hostile and un-Christian attitudes toward gays.

“Anybody who doesn’t show love towards gay and lesbian people is insulting God,” Martin said. “They are not just homophobic if they do that. They are actually God-ophobic, because God loves every one of those people.”

O’Neill, as is his style, had a quip to capture the absurdity of his situation. “I love the fact that the archbishop has essentially come out for Team Panti,” he told the AP.