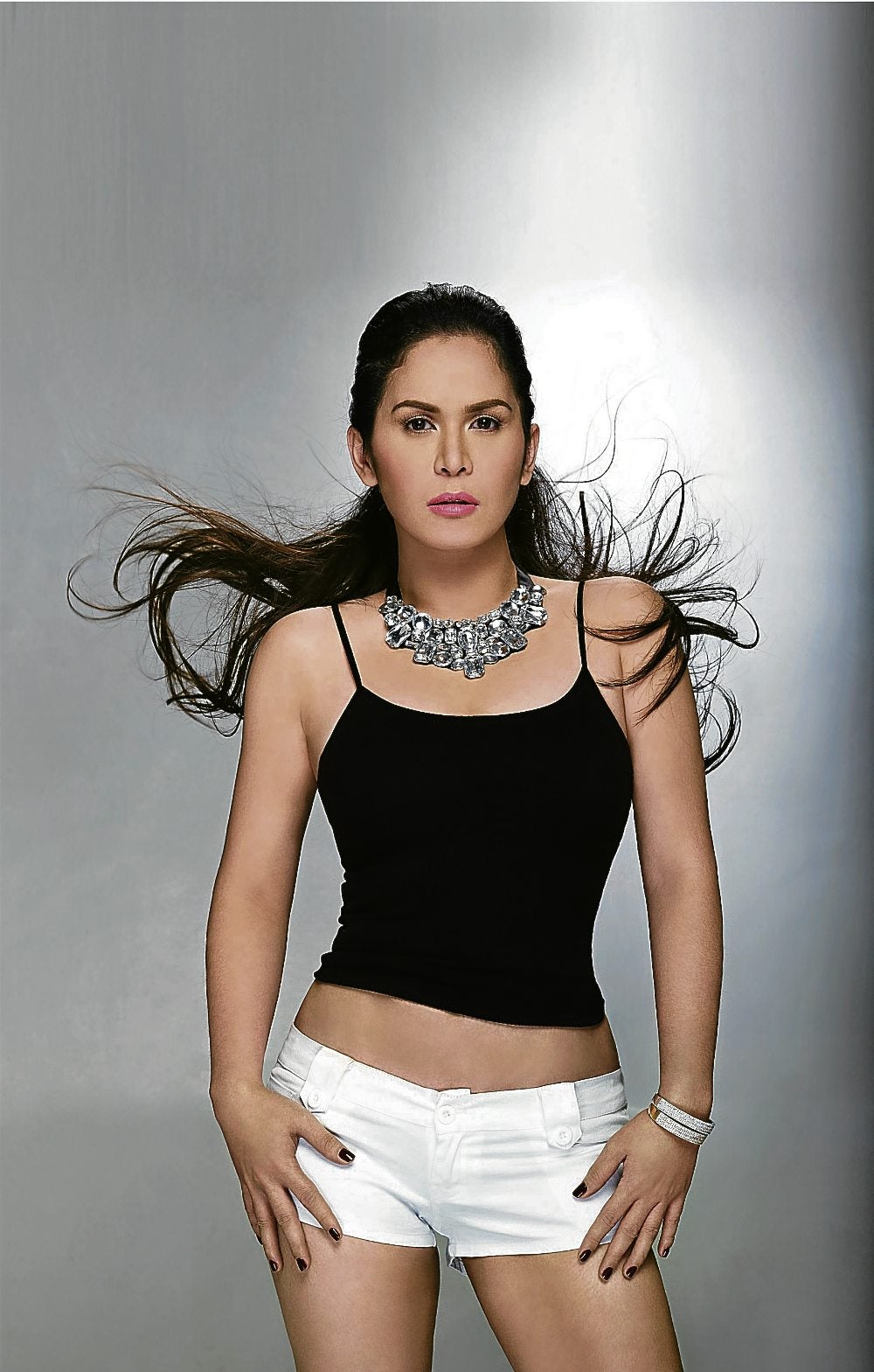 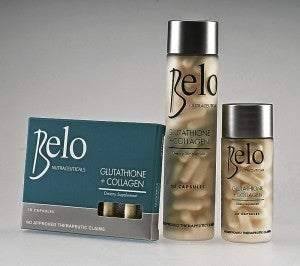 When Jinkee Pacquiao’s billboards for Belo Nutraceuticals started popping up on the metro’s highways, kibitzers expressed amazement at how much her face has changed, implying that someone somewhere got a little too Photoshop-happy.

Worse, others said that the boxing champ’s wife and her identical twin no longer look alike. With too much work done on her face, Jinkee, it is said, has begun to resemble the women in the “Real Housewives” reality shows.

Well, it seems the joke is on Jinkee’s critics. Even she is amazed to see her face in the mirror sometimes, she said. But she likes what she sees.

“I’m happier with what I see,” Manny Pacquiao’s wife said in Filipino, candid about her physical transformation at the Belo event this week, where celebrity doctor Vicki Belo and daughter Cristalle Henares, managing director of Intelligent Skin Care Inc., makers of Belo Nutraceuticals, introduced her to the media as the face of the brand.

“Sometimes I don’t recognize myself,” Pacquiao said with a giggle. “It’s like, wow! It’s true what people are saying, I agree. If you compare me to the old Jinkee, especially when you look at my photos, there’s a big difference.”

The change has given birth to a new, more confident Jinkee Pacquiao. “Fearless,” the Belo campaign puts it.

Dressed in a fully beaded, strapless off-white Herve Leger dress (“worth $4,000,” volunteered her personal stylist), Miu Miu heels and at least 15 carats of white and yellow diamonds (“5, 5, 5,” she said, gesturing to her earrings and matching ring, appearing embarrassed), the former shrinking violet boldly faced a roomful of journalists at Makati Shangri-La’s Red restaurant on Tuesday.

Married to a world-famous athlete, Jinkee, 31, has gained  public sympathy and approval for the grace with which she handles the controversies about her husband’s alleged infidelities. Like any woman, she used to cry over her marital woes, until the once meek and quiet Jinkee reached her tipping point.

“Ayoko nang magalit, gusto ko na lang magpaganda,” she had told Belo. That became her battlecry, and the ad campaign tagline when she was launched as endorser of Belo Medical Group two years ago. She turned the scandal to her advantage. If the best revenge is looking good, this former saleslady who married the boxer back when he was struggling did just that.

She reemerged on Edsa billboards lipo-ed, tightened and firmed up, youthful and just as desirable as the starlets being linked to her husband. 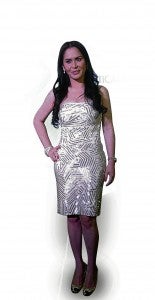 Jinkee was already a longtime paying patient of the clinic before Belo signed her up as endorser. Five years ago, according to Belo, she wanted to meet with     Jinkee to convince her to be the face of the company. Jinkee was too shy to even meet with Belo. Then came the Krista Ranillo scandal; the sexy starlet was allegedly having an affair with the boxer. That was the last straw.

Jinkee had paid for her own liposuction procedures until two years ago, said Belo. The clinic only had to perform Bodytite, a skin-tightening procedure, on Jinkee’s arms, thighs and abs, especially after she lost 45 pounds. It was imperative on the abdominal area, as she has had four children. Everything else—her buttocks and bosom—is all Jinkee’s, said Belo.

The petite Jinkee is an attractive woman to begin with. But her face also underwent some Belo tweaking. Her features are sharp and “a little masculine,” according to Belo, that they had to inject fillers on her cheeks and nasolabial folds (laugh lines). Botox was also injected on her masseter (jowls), and blepharoplasty (eyelid surgery) was performed on her eyelids to take out the excess fat on her upper brow. Then Ulthera, a non-surgical skin-tightening and firming procedure using ultrasound, was done on her face.

“She looks so different now, she does,” Belo conceded. “She still looks Jinkee, just better. She was so meek before! Did you see her chatting with [socialite] Maricris Zobel?” (The Pacquiaos made headlines again recently when it was reported they acquired a property in the exclusive old-rich enclave of Forbes Park; they will move there next year.)

Belo also pointed out that Jinkee was a fan of the mass-market clothing label Bebe when they first met. After Belo gifted her with a Herve Leger dress for a recent Belo shoot, the designer label preferred by young socialites and Hollywood stars is now the younger woman’s favorite.

“I love the transf 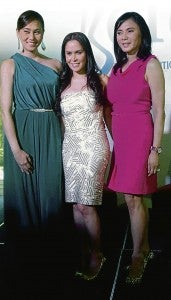 Belo added, “I do admit in the billboard it was a little different kind of face. But we were just trying to get the message out that she’s now fearless, that’s why the look is kind of strong.”

Belo said her clinic also did some work on Jinkee’s twin sister Janet.  “A little, because they don’t look alike na,” she said with a laugh. “Just a little so they don’t look too different.”

Jinkee laughed when this was pointed out to her. But like a loyal sister, she remained generous to her twin. “I think people are saying that only because she’s very simple. I’m also getting all the attention. She doesn’t wear makeup a lot. Also, I dress up a little more expensive now. If I was shy, she’s worse.”

It’s evident she’s no pushover. When a reporter dropped the name of a starlet being linked to her husband, her mood darkened, but only briefly. “Princess who? Why would she apologize? Has she done something?” were her fighting words.

Then she collected herself. “Be brave and be tough in everything,” she advised other women. “You shouldn’t be knocked out just by anybody. Fight for what’s yours.”

When burdened and stressed, she turns to some retail therapy and food. Asked if she sets herself a budget limit, Jinkee turned coy, and laughed. “Minsan wala.” But the perception is that this multibillionaire boxer’s wife has the smarts, and, despite appearances, knows how to handle their finances.

Quizzed as to who gets her designer hand-me-downs, she said it’s her sisters. But she also sells a lot in her boutique in General Santos City. She built that shop to recoup some of her shopping expenses, she said.

Up close, Jinkee seems the apt spokesperson of Belo Nutraceuticals Glutathione + Collagen dietary supplement. She has a fair, impeccable complexion underneath all that makeup.

Glutathione is a master antioxidant that’s even more powerful than Vitamin C, according to Belo. Taking glutathione has a “side effect” that Filipinos and other Asians find favorable: it whitens the skin. However, Belo believes it’s not enough for a beauty supplement to just whiten the skin; it must also be an anti-aging, ergo collagen was added into the formula. 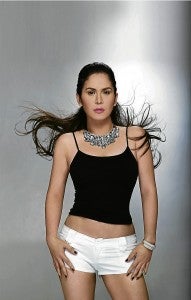 Collagen, of course, is the most dominant protein in the human body, and 70 percent of it is on the face. As one ages, the body produces less collagen and it takes longer to reproduce. At age 40, collagen production will drop by up to 45 percent.

Belo used the “sofa analogy” to illustrate her point. In a couch, she said, there’s the upholstery (epidermis), the foam (collagen) and the frame of couch (adipose tissue, etc.). Sometimes the sofa may look okay, but once you sit on it, you could sink from the missing volume in the foam underneath.

“If you only keep doing chemical peels, diamond peels, you’re fixing only the upholstery. You must also take care of the foam.”

With a suggested dosage of two capsules twice a day, most patients can see results in a month, Belo said. (It’s sold at Mercury Drug, Watsons and other drug stores nationwide.)

“If you want to be beautiful, don’t think of the pain,” Jinkee advised. “Others are scared because they think it’s painful.” She added, matter of factly, “So what, there’s pain reliever anyway. It’s not hard if you like the results.”

She no longer wishes to change anything more about her looks. “I’m happy now,” she said, adding with a chuckle, “if I do more, people might no longer recognize me.”