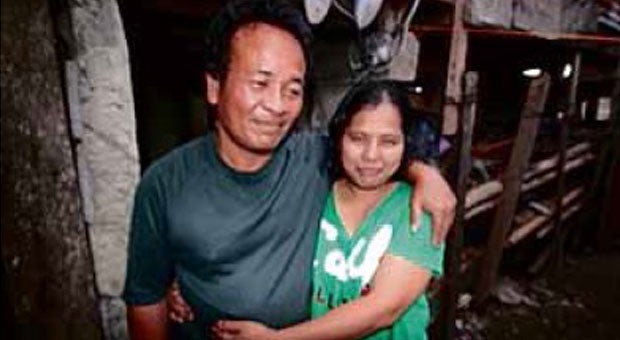 PALO, Leyte—Cupid’s arrow has found its mark in the grieving hearts of two persons in the crucible of death and destruction in the wake of Super Typhoon Yolanda here.

Nestor Vergara, 54, and Rhoda Pulga, 36, both lost their spouses to Yolanda (international name: Haiyan) on Nov. 8 last year but fell in love a few days before Valentine’s Day.

Their union, coming just three months after the disaster, immediately stirred a tempest, pitting conservatives who think it was too early against liberals who see a celebration of life amid the rubble.

Vergara’s wife, Imelda, 53, and Pulga’s husband, Ramil, 36, drowned in the tsunami-like storm surges that swept into the coastal village of Cogon. They were among the 154 in the government’s death toll, including Pulga’s 65-year-old father, Romulo.

“She swept me off my feet and on the third day I asked her to marry me, and she said yes,” said Vergara, who owns a small business. The two met on Feb. 2 during a program to mark the fifth death anniversary of Vergara’s grandmother Alejandra at his brother’s house in Cogon.

“When I lost my husband, I needed a man, and I prayed to God to give me somebody old and mature enough to be by my side,” Pulga said.

Malvarosa Perote, the barangay (village) captain who personally knows the couple, said, “It was a case of love at second sight for both of them.”

Their respective children support their union. Vergara’s two sons—Marlon, 33, and Nestor Jr., 19—and Pulga’s two children—Rondel, 19, and Arjay, 4—are now living together with them in a small, crudely built shack.

Local officials say Vergara and Pulga are the first widower and widow who survived Yolanda to fall in love and live together.

The two are among the storm’s 60 widows and widowers in Cogon and nearby San Joaquin village. On Wednesday morning, some of them offered flowers and lighted candles for their loved ones in front of a mass grave for 380 victims in front of San Joaquin church.

“We cannot sulk forever in our pain. We have to find ways to go on living,” Perote said.

The news of the new lovers is also a breath of fresh air and a sign that Cogon, a desolate and blighted community, is springing back to life, Perote said.

However, the Catholic Women’s League (CWL), the avowed guardian of morality in this highly conservative town of 60,000 Roman Catholics, frowned upon the union as nothing short of immoral.

“It’s not even six months since their loved ones died. With this relationship, they are desecrating the memory of their spouses,” said Linda Barbosa, 69, the most vocal official of the 22-member chapter of the CWL.

A widow for the past 19 years, Barbosa said Vergara and Pulga were violating Catholic dogma requiring a three-year period of mourning for widows and widowers from the time of their spouses’ death.

“The Church can say no, but we have to follow what is in our heart,” said Marlyn Cabilic, a 36-year-old widow and a mutual friend of the couple. Cabilic also lost her husband Ricardo, 40, to Yolanda.

Described by their friends as both stubborn and headstrong, Vergara and Pulga, who are devout Catholics, want to go ahead with their plan to marry on June 7 to coincide with the Cogon village fiesta.

But on Friday, Valentine’s Day, they plan to offer flowers at the graves of their dead spouses.

“We will ask their souls for forgiveness, and then we will ask for their blessings,” they said.