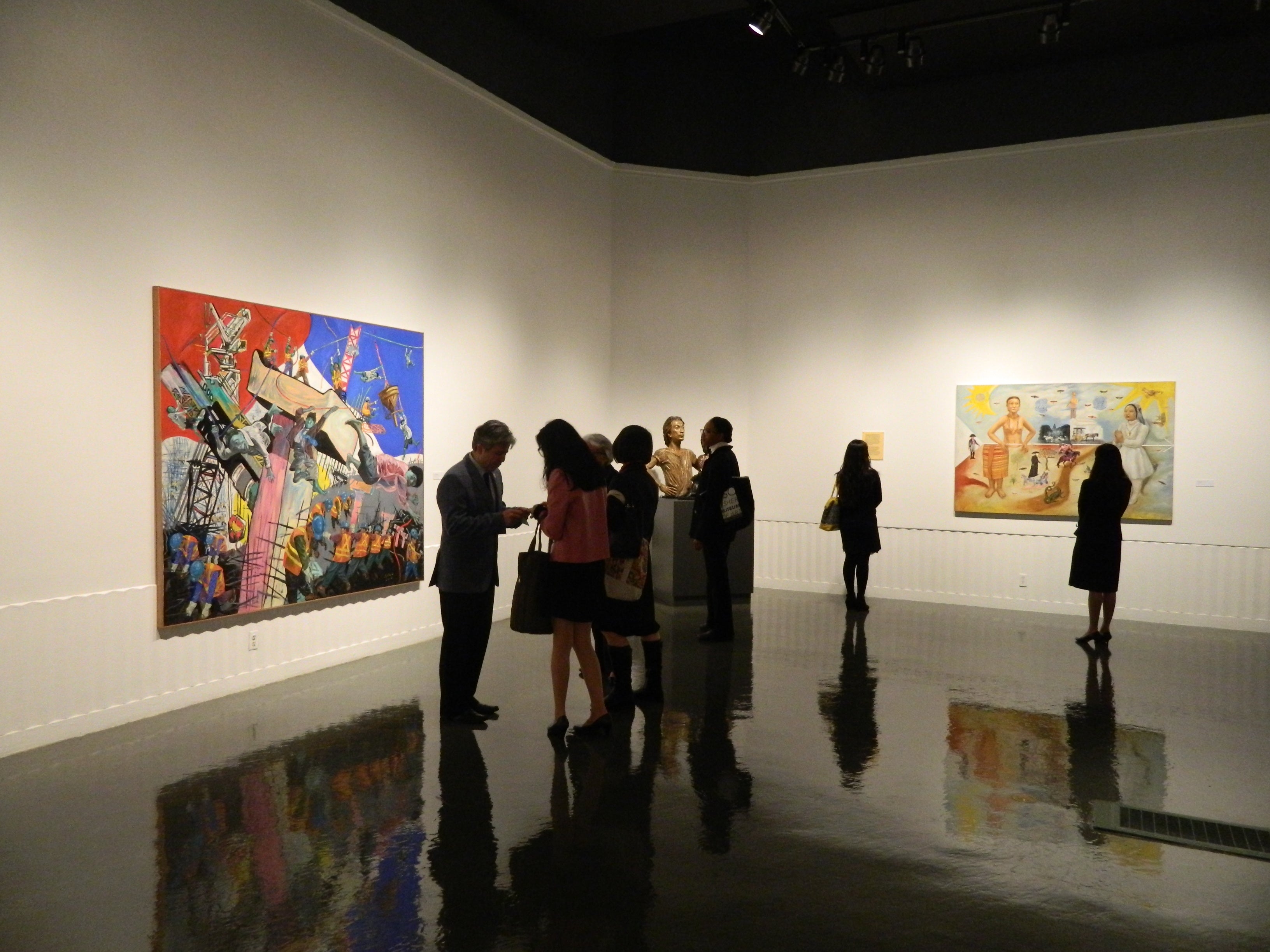 LOS ANGELES—Hundreds of students and art enthusiasts flocked to the University of Southern California (USC) Fisher Museum of Art for the opening of “The Triumph of Philippine Art,” the first exhibit ever dedicated to contemporary Filipino art on the West Coast.

The exhibit, which opened on Feb. 5, consists of paintings, sculptures, art installations, videos and photographs created by Filipino artists who depict the political turmoil and socioeconomic struggles of the Philippines through art.

One area of the gallery housed pieces inspired during the Marcos dictatorship from 1972 to 1986; another part holds post-revolution artworks from 1986 to the present.

Curated by Philippine-born artist and historian M. Teresa Lapid Rodriguez, the collection was first shown at the George Segal Gallery at Montclair State University in New Jersey where she works as the gallery director.

One of the works on display is “Rigodon,” a floor installation created by Leo Abaya in 2012 that mimics the game of chess, except that the chess pieces are replaced by the current and former presidents of the Philippines. It’s fascinating to see which presidents advanced the most in the game, with former President Ferdinand Marcos traveling the farthest on the chess board.

“Philippine Gothic,” a 1984 sculpture by renowned artist Julie Lluch, reinterprets Grant Wood’s “American Gothic,” which comments on the traditional roles of American households. Lluch has figures of a husband, wife and their dog in traditional Filipino farm clothes, showing the woman’s unhappiness with being relegated to household chores while the man flaunts his ability to provide for his family.

Selma Holo, director of the Fisher Museum and professor of art history at USC, shared her excitement in bringing the exhibit to Los Angeles, knowing that not many people get to see contemporary Filipino art really.

“It’s a whole way of opening up that we’re simply not accustomed to,” Holo said. “Many many artists who put their lives on the line are represented here, and the art is really terrific.

She also thanked her daughter-in-law, Kris Holo, for introducing her to Philippine art and connecting her with Rodriguez.

Philippine Consul General Helen Barber-De La Vega spoke at the event, noting that the exhibit was a fitting tribute to the 28th anniversary of the People Power Revolution, which is coming up in February.

“Through these artworks, we discover or rediscover not only the socioeconomic and political struggles of the Filipino nation and people. Woven underneath these works is the story of a resilient people, who have never given up hope to live in a homeland thriving in full democracy and development,” De La Vega said.

Amapola Alfonso, a graphic designer at USC, was inspired to see Philippine art being featured at her school for the first time.

“It’s really exciting that they featured Filipino art here and I hope that they continue to do it,” Alfonso said. “I think it pays respect to Filipino culture and especially with what happened to Philippines with the typhoon and everything, this just brings greater awareness to the people in the community as well as Filipino Americans.”

Filipino-American a capella group Filharmonics, which was featured on the show “The Sing Off,” performed at the opening.

“The Triumph of Philippine Art” will be shown at the Fisher Museum from Feb. 6 to April 13. The museum is open from Tuesday to Friday from 12-5 p.m. and on Saturday from 12-4 p.m.

After its stop in Los Angeles, the exhibit will travel to Manila to be featured at the Ayala Museum.