Instead of wine, why not whisky? | Lifestyle.INQ ❮ ❯ 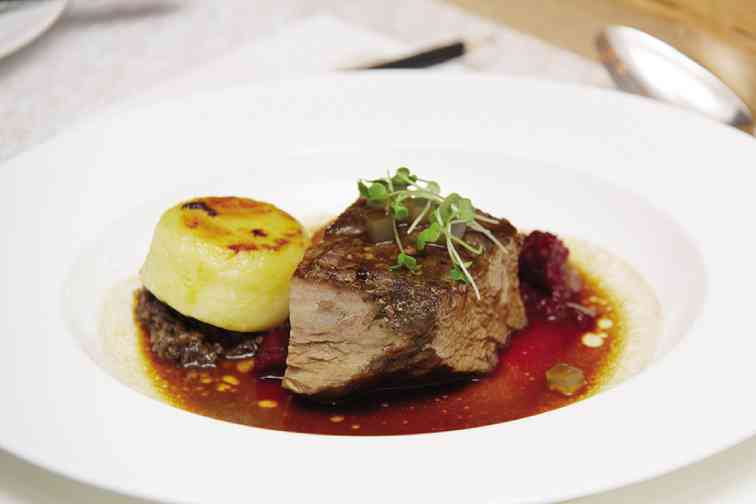 Instead of wine, why not whisky?

Pairing whisky with food is an elegant way of serving a contemporary meal. It’s also sexy, since one has to take a slow sip of the drink between delicate bites to enjoy the flavors.

Whisky is not an “old man’s drink” anymore, said Matthew Fergusson-Stewart, brand manager of Glenfiddich, a line of single-malt whiskies distilled in Scotland by William Grant & Sons. He recently hosted a food-and-whisky-pairing dinner while wearing a kilt at Fairmont Makati’s presidential suite.

“Women and younger people drink whisky now,” he pointed out. “It is best taken as is or chilled; but some prefer it with soda or as a cocktail.”

For the unusual whisky and food pairing, Glenfiddich had Belgian chef Emmanuel Stroobant execute a “modern classic” menu. Each dish was infused with a Glenfiddich whisky and paired with whisky of the same age.

He noted that cooking with whisky is just like using brandy, cognac and wine for French dishes. The challenge for him was to present food that brings out the subtle flavors in the whisky. Our challenge was to identify these flavors—without getting drunk.

The dinner started with Scotch Quail Egg with Oak-Smoked Salmon Mousse, topped with whisky-infused pear, tartare dressing, wild herbs and popped malt. It was paired with Glenfiddich Special Reserve 12 Year Old, a light and creamy whisky with notes of fresh pear and oak.

Stewart instructed us to eat “by components,” and take sips between bites: “Take a piece of pear, sip whisky. Taste the mousse, sip whisky. Have a bite of the egg, sip whisky.”

The alcohol in the whisky dissolved the oil in the salmon, letting it melt in the mouth. The popped malt and smoked salmon brought out the malty and oaky flavors in the whisky.

Next was Warm Spices-Crusted Lobster Tail in Glenfiddich-Flamed Lobster Bisque. It was sprinkled with honey-caramelized almonds and finished with vanilla-butter emulsion.

The rich and creamy soup was paired with Glenfiddich Solera Reserve 15 Year Old, a warm and spicy whisky with notes of spice, honey and fruits that’s aged in European, American and New American oak, giving it a deep, oaky flavor.

Stewart explained that all Glenfiddich whiskies have 40-percent alcohol content, but one may taste stronger than the other because whisky gets spicier as it ages. The older spirits also have bolder taste and deeper color, and are usually paired with heavy items like lamb or beef.

The meat was slowly cooked until very tender to achieve a jiggly marbling of fat. The fruits and spices countered the oiliness of the dish, which was paired with Glenfiddich Ancient

Reserve 18 Year Old, a very spicy, fruity whisky with notes of oak, baked apple and cinnamon, and has been aged in fine Spanish Oloroso wood and American oak casks.

Stroobant served a traditional Scottish sweet called cranachan for dessert. “It’s something I didn’t know until two months ago,” he said, laughing.

Glenfiddich Cream Cranachan has honey, lime-ginger custard, raspberry, toasted oatmeal and toffee dust. The tangy dessert was paired with Glenfiddich Gran Reserva, a 21-year-old whisky with sweet notes of honey, vanilla, toffee, fig and banana. It is aged in casks used to store Caribbean rum, giving it a fruity, toffee taste with a hint of ginger.

Glenfiddich takes pride in being a family-run distillery that has been around since 1887. The Special Glenfiddich Anniversary Vintage 25 Year Old was released in celebration of the company’s 125th anniversary. There are only 286 of these bottles, and two were sold in a benefit auction held during the dinner.

We had a taste of the 25-year-old vintage as an after-dinner drink. It is a bold blend with sweet hints of fruitcake, cinnamon, vanilla and coffee. It is also a bit nutty with notes of toasted almond, and has a citrusy zing.

Instead of wine, try serving whisky at your next party. Stewart’s other tips: Store whisky in cool places, or in the fridge; consume leftover whisky immediately so it won’t oxidize and change flavors.