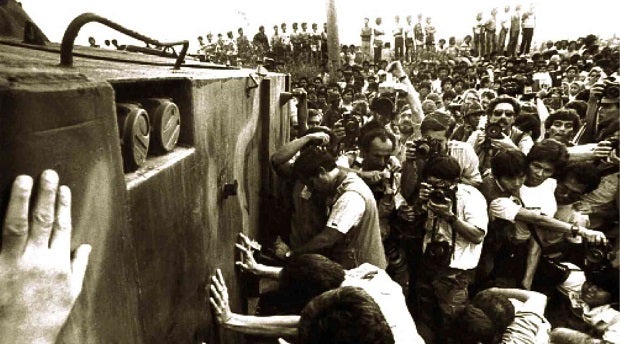 TRUE PEOPLE POWER When tanks came rumbling down Edsa toward Camps Aguinaldo and Crame on Feb. 23, 1986, they were no match for the courage and spirit of the thousands who came to stop them on their tracks. The armored column under Marines Gen. Artemio Tadiar had no choice but to retreat. INQUIRER PHOTO

In 1970, a spoken-word composition called “The Revolution Will Not Be Televised” by American soul and jazz artist Gil Scott-Heron featured haunting lyrics that ended with the line, “The revolution will be live.”

That was exactly what happened in the original Edsa People Power Revolution, which the Philippine and international media reported, with no idea how the momentous four days in February 1986 would actually end.

Early Saturday evening, Feb. 22, I was with my friend Mike Mendoza, who had just received his weekly cash allowance from his dad. Mike and I were high school buddies in La Salle Green Hills. We were both in senior college that year—he at the University of the Philippines Manila, and I at La Salle Taft.

Mike had become a UP activist and had been taking me to gatherings of his organization. La Salle, too, was not without its politically conscious groups, and I would always join the political science majors led by Nani Braganza at the confetti rallies on Ayala Avenue as well as the ones held at Liwasang Bonifacio.

Walking along Padre Faura in Ermita, Manila, Mike and I were about to enter a bar to drink a few beers, when we heard the voice of then Defense Minister Juan Ponce Enrile on the radio. Apparently, many establishments that we passed by had a radio on, the volume turned up high.

Enrile was speaking in a slow but firm manner, detailing how he helped then President Ferdinand Marcos cheat his rival Cory Aquino in the Feb. 7 snap presidential elections.

As soon as we learned that Enrile and then Armed Forces of the Philippines Vice Chief of Staff Fidel Ramos were holed up in Camp Aguinaldo, Mike and I lost no time in flagging down a jeepney bound for Cubao, Quezon City.

We were silent during the ride, but my mind flashed back to Aug. 21, 1983. I was then at home listening to the somber voice of the announcer on Radio Veritas; he was trying to fill in scant details of that dog day afternoon when former Sen. Benigno Aquino Jr. was murdered as he returned home from exile in the United States.

In the days and weeks that followed, I would hear the English hymn “Onward, Christian Soldiers” on Veritas. It sounded solemn yet provocative, evoking images of going to war to defend truth and freedom.

In the next three years, the radio—which provided my daily dose of music upon waking up to prepare for school and before going to bed at night—served another purpose: keep me posted on the national crisis that unraveled following Aquino’s assassination.

When not discussing the hearings of the Agrava Fact-Finding Board, Mike and I hung out at clubs and bars in Mabini listening to songs by Phil Collins, Eric Clapton, Howard Jones, Cyndi Lauper and other popular artists of the ’80s. There was a place called Bibber’s on Padre Faura whose DJ conducted a name-that-tune contest, in which the winner was given free beer. We were going to Bibber’s that fateful February Saturday night when the radio broadcast of Enrile’s confessions stunned us.

We got off at Mercury Drug branch on Edsa corner Aurora Boulevard and walked briskly toward Camp Aguinaldo. The crowd was probably just in the hundreds, although we could see that more and more people were walking along the stretch of Edsa starting from Santolan.

There was a palpable sense of anxiety and excitement as we kept walking. Where were we going? Nowhere. We kept walking past the two camps, Aguinaldo and Crame, without feeling tired. We stopped upon reaching Ortigas Avenue and turned back to walk again.

Without saying a word, Mike and I knew that we were just savoring the “freedom” of being able to do as we please on this highway.

I bumped into one of my La Salle professors, Marjorie Evasco, who smiled and gave me a high-five.

Back in front of the two camps, I surveyed the scene while hearing transistor radios tuned in to Veritas which was broadcasting updates from Enrile and Ramos. For the first time I heard June Keithley as she anchored the broadcast on the Catholic radio station. Her high-strung voice, which suited her comedy days on TV, now emitted a warm, soothing presence as people tried to make sense of what was happening.

The mood turned light whenever Keithley played “Mambo Magsaysay,” although we knew the song gave a false sense of joy since the thought of getting killed should there be shooting hung over our heads.

Mike and I hardly slept as we laid down on the pavement, side by side with other students near the barricade on Edsa corner Santolan Road, which was practically deserted. If Marcos loyalists had taken that route and attacked on that first night, they would have succeeded in entering Aguinaldo.

I don’t remember having breakfast on the morning of Feb. 23. Early afternoon, Mike and I heeded the call to rush over to Ortigas because there were tanks attempting to barrel their way into the barricades.

But the crowd was thick enough to stop them on their tracks. A military officer (Gen. Artemio Tadiar) stood on one of the tanks and persuaded us to step back. But the throng stood its ground while shouting back each time the tanks started their engines. I heard myself hurling invectives at Tadiar.

Around 5 p.m. the tanks retreated. Mike and I found ourselves climbing the roof of one of two JD buses barricading Edsa and Ortigas. We saw two other high school batch mates, Jude Aguilar and Joey Raquiza, joining us. I was telling Mike that maybe this was what the Diliman Commune looked like before martial law, when, suddenly, marijuana smoke wafted. I quipped, “Now that’s what freedom smells like!”

Late at night we saw Tingting Cojuangco walking on Ortigas and her husband Peping arriving by car to talk to her. “We stopped the tanks earlier,” she bragged. Peping looked stoic.

Back in front of the camps we tried to catch some sleep on the grassy part of the pavement; but the uncertainty of the situation kept us awake. Good thing the weather was cool, and the voices of people praying the rosary calmed our nerves.

There was tension at dawn of Feb. 24. Keithley was issuing a warning that loyalist soldiers were massing at Santolan Road. The leaders in the crowd briefed us on what to do in case tear gas is thrown in our direction. People around us were wetting their handkerchiefs.

Somebody gave me something that looked like big jackstones, which turned out to be nails improvised as a weapon to flatten tires. I didn’t know what to do with them so I just threw them away.

There was commotion and, indeed, tear gas had been lobbed on Santolan. I recognized another La Salle schoolmate running toward us, his face wet and his eyes red.

F**k, I thought, this does not look good.

Helicopters flew over Crame, but they turned out to be friendly forces led by Air Force Col. Antonio Sotelo.

A few moments later, Keithley played “She’s Not There,” a song by The Zombies that paraphrased what she was told, that Marcos had left Malacañang. She shouted on the mic: “He’s not there!”

Another song we heard was John Lennon’s “Power to the People,” echoing the term Ramos had coined: That we were witnessing “People’s Power.”

I told Mike that perhaps we could go home, rest and celebrate with our respective families. As the bus slowly wound its way on Edsa Guadalupe, I saw jubilation all around. Which turned out to be a false alarm because Marcos had not left the Palace and was in fact getting ready to be proclaimed as reelected President.

Oh no, I thought, do we go back to Edsa? But much as the spirit was willing, the flesh started getting weak. I fell asleep for the first time in three days, and couldn’t get up the morning after. I was feverish and had to content myself watching the proceedings on TV.

Looking back, I felt amazed at how people could band together for a common cause, fending off hunger and tiredness for the sake of a higher goal.

The revolution that was Edsa I was no picnic, but thank God there was radio and June Keithley, and, of course, the crowd to keep us company.

Behind the ‘miracle’ of Edsa