Lagos gets on its bike with recycling 'loyalty' scheme | Inquirer Lifestyle 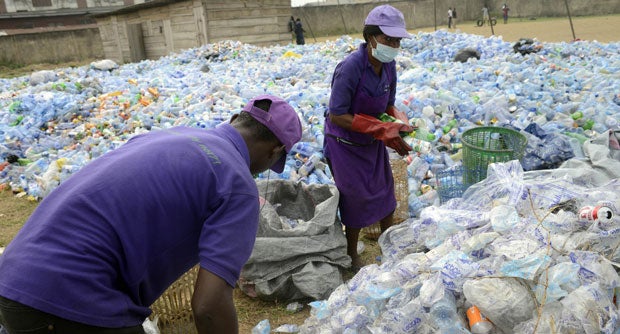 Nigeria's biggest city Lagos is home to some 20 million people and produces a staggering 10,000 tonnes of waste every day, a lot of which piles up on the busy streets or floats in open sewers. Currently, an estimated 40 percent of the megacity's waste is collected and taken to massive rubbish dumps, where scavengers pick through it for scrap and salvage to sell. But a new scheme is hoping to change people's attitude towards rubbish -- and their immediate environment -- by providing a material incentive to recycle plastic bottles, bags and tin cans. AFP

Lagos gets on its bike with recycling ‘loyalty’ scheme

LAGOS – Nigeria’s biggest city Lagos is home to some 20 million people and produces a staggering 10,000 tons of waste every day, a lot of which piles up on the busy streets or floats in open sewers.

Currently, an estimated 40 percent of the megacity’s waste is collected and taken to massive rubbish dumps, where scavengers pick through it for scrap and salvage to sell.

But a new scheme is hoping to change people’s attitude towards rubbish – and their immediate environment – by providing a material incentive to recycle plastic bottles, bags and tin cans.

“Wecyclers” is the brainchild of Bilikiss Adebiyi, who came up with the idea while studying in the United States for a master’s in business administration.

“People die from flooding because we are clogging our drainage,” said Adebiyi, an MIT Sloan School of Management graduate and former IBM software engineer.

“The chemicals from the plastic leach into the soil because people just dump it indiscriminately, they don’t understand that they need to dispose of the waste properly,” she told AFP.

“Wecyclers” was set up 18 months ago with the backing of the Lagos Waste Management Authority (LAWMA), the public body which normally handles refuse collection in the city, and a handful of sponsors.

So far, it has collected nearly 200 tons of waste from about 5,000 households – all of it on bicycles specially adapted to carry large coloured cloth sacks for recyclable rubbish.

The distinctive “wecycles” have an edge over the giant dustcarts that collect roadside waste from homes and businesses in that they can ply even the narrowest and most rutted streets.

The riders go door to door to collect and weigh the recycling. Every kilogramme accumulates credits for clients, allowing them to trade in their points for prizes.

“It’s one of the reasons why we used the incentive system, when people actually can earn points and get something valuable from their points.”

Under the scheme, households can cash in their points for basic foodstuffs, kitchen equipment such as a blender, mobile phone credits or simply hard cash.

One client was even able to buy himself an electric generator – a luxury in a country where power cuts are a daily occurrence.

Ademiyi said the potential rewards rather than just promoting a general principle of environmental awareness offered the best method of getting people recycling in Nigeria.

“The incentive was a way to get the conversation started. Let them get excited about recycling because of what they’re going to be able to get from it,” she added.

“But then, as they’re recycling, then they see the other benefits, from the cleanliness, the reduction of flooding, reduction in diseases.

“People will now know why they should continue to recycle.”

The collected waste is transported to a patch of ground loaned by LAWMA in the working class neighbourhood of Surulere, where it is sorted and then sold to recycling factories.

Plastic goes towards making padding for pillows and mattresses, textile fibres, rubbish sacks, even flip-flops, while the tin cans are melted down and turned into other aluminium products.

Empty small plastic sachets of cheap drinking water, which are very popular in Nigeria, are found strewn across the pavements and gutters in Lagos.

They are bought by companies such as Bridgeco Global, which cleans and then melts them down before turning them into small plastic balls at its factory in the city’s Ikeja neighbourhood.

The granules are then resold at 170 nairas ($1, 76 euro cents) a kilo to factories making basins, buckets and other plastic objects, said Bridgeco Global owner Ahmed Lawal.

One woman, who lives and works as a tailor in Surulere, said she had started collecting her recyclable waste for Wecyclers last year.

“Before it (the neighbourhood) was very dirty, smelling everywhere, so dirty,” she said.

“But since I’m with them everything is clean. So they normally come, with their gift and whatever…They’re good.”

Adebiyi’s project has made waves and last October it won a Cartier Women’s Initiative Award, which recognises female entrepreneurs across the world.

Currently, the business employs about 30 people but it is hoped that more than 100 will be employed by the end of the year.

Plans are also afoot to expand from the two main poor areas of Lagos to another two this year, as well as in the federal capital Abuja and the state of Uyo, in the southeast.