‘Recto University’: You name it, they have it! | Inquirer Lifestyle ❮ ❯ 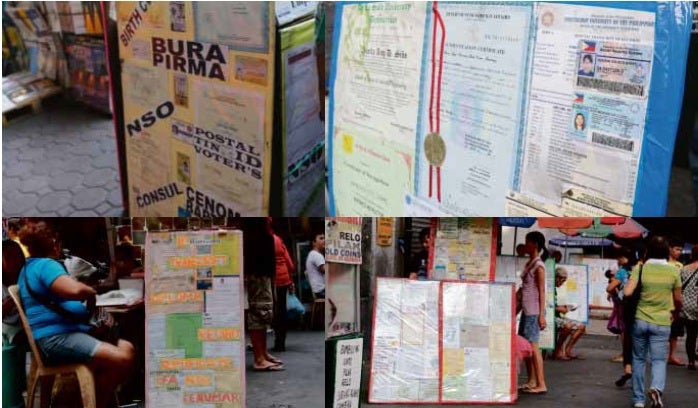 ‘Recto University’: You name it, they have it!

From an ID card to a driver’s license, thesis paper, receipt, Department of Foreign Affairs (DFA) red ribbon, diploma or any other document, you can get it here. One can order these items for anywhere between P200 and P1,500 and collect it after two hours at most. But of course, it’s fake.

Claro M. Recto Avenue, known as “Recto University,” is a one-stop shop not only for students in Metro Manila but also for those from the provinces who need documents for a job.

Some fake documents are already half-done by the time they land at “Recto U”; forgers only need to fill the necessary information given by the customer.

A year-round bestseller is the Land Transportation Office (LTO) driver’s license, which costs P500. Joey explained that they already have blank IDs ready to be filled up, whether it be a university or government ID.

In the middle of school term, the bestseller is the Certificate of Registration (COR) of the students, which Joey sells for roughly the same amount.

When asked whether he has a copy of diplomas of every university in Metro Manila, he says confidently,  “Oo naman.”

Moreover, Joey bragged, “Recto U” is not limited to the universities in Metro Manila. There also are copies of diplomas from schools as far as  Mindanao and Visayas, some of them not known to Manileños.

The most expensive item in their stall is the DFA Red Ribbon, which is sold for P1,500, although he admitted that its original price is only P400.

But nothing is as popular as the fake receipts sold between P200 and P300, depending on the kind of receipt requested. Among these are the official receipts of colleges and universities.

A professor from a well-known university in the area shared what happened when a student of his was caught using a fake receipt.

“It was an official receipt from our Palawan tour,” he recounts.

The parents gave money to their son to pay for the school-sanctioned Palawan tour. It was later discovered that the student splurged the money on a date and used the fake receipt from Recto as proof that he joined the tour. The student was suspended for one semester.

While it seems like most items are overpriced, Joey confessed that the money is barely enough to support his family on a weekly basis. He simply acts as a runner, while the forgeries happen behind closed doors. He  gets his cut of the payment weekly (daily, if business is good).

Moreover, the cops reportedly take a weekly cut from these payments, as well.

Their cut ranges from P40-P300 a week, depending on the weekly profit of the stall.

There is no need for a secret handshake to do business. Store owners stand on the street and ask passers-by, “Boss, pagawa kayo?”

From the point right before the entrance of University of the East-Manila   in Recto to the Light Railway Transit (LRT) 2 Recto Terminal Station, there are around 50 stalls with a sign indicating they sell fake documents. There are other establishments who hide their business behind a tarpaulin.

Through the years, “Recto University” has existed and numerous raids have been conducted by the Manila Police District. Business is bad for about a week. Then people start “graduating” again from “Recto U.”