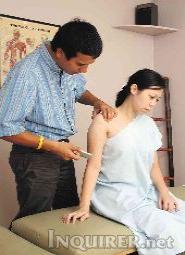 MANILA, Philippines—Workers suffered from back pains more than any other ailment or disease on the job, according to the Bureau of Labor and Employment Statistics (BLES).

The latest BLES Integrated Survey showed that 35 percent—or around 30,000—of the 85,483 occupational diseases reported in companies with at least 20 workers was for back pain.

BLES defines an occupational disease as an abnormal condition or disorder—other than an injury—caused by exposure over time to risk factors associated with work activity.

Such factors include contact with certain chemicals, inhaling coal dust, carrying out repetitive movements and exposure to extreme temperatures.

“Relative to the number of cases by industry, (back pain) was prevalent in almost all industry groups, except in mining and quarrying, electricity, gas, steam and air conditioning supply, professional, scientific and technical activities, and repair of computers and personal and household goods,” BLES said.

The second-most prevalent workplace ailment was essential hypertension—high blood pressure of which the cause cannot be clearly identified. This represented 13 percent or around 11,200 of the total cases.

By industry, the incidence of essential hypertension was highest in electricity, gas, steam and air-conditioning supply with more than one-third of cases (36 percent), and mining and quarrying with almost one-fifth (18 percent) recorded.

Neck-and-shoulder pain was the third most prevalent ailment with 10 percent or some 8,500 cases reported. This was most observed in professional, scientific and technical activities, and the repair of computer and personal and household goods, other personal service activities.

By sector, manufacturing recorded 36 percent or more than 31,000 of all occupational diseases for the two-year period.

Workers in administrative and support services reported some 13,000 cases, or 15 percent of the total, while wholesale and retail trade recorded around 6,200 cases or 7 percent.

7 ways to cope with arthritis pain