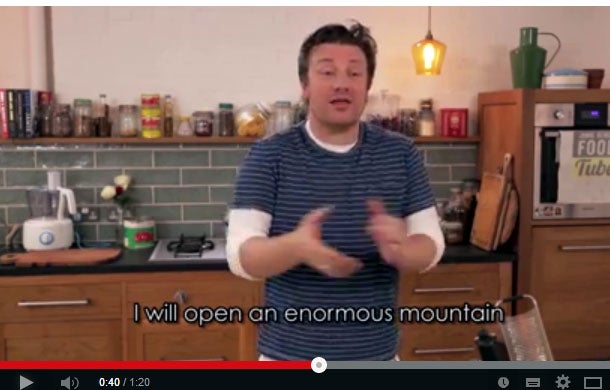 HONG KONG — Hong Kong fans of British celebrity chef Jamie Oliver fell about laughing on Wednesday after he announced a new Italian restaurant for the city in Cantonese — with a few slip-ups.

Making a stab at the local Chinese dialect in a light-hearted YouTube video, he announces: “I will open an amazing Italian submarine.”

Attempting to repeat words read out by a Cantonese-speaker off-screen, he also promises that the restaurant will be “very slippery”, before collapsing into giggles.

The video (http://www.youtube.com/watch?v=SiIiJZ-Bki0) has drawn more than 35,000 hits since it was posted on Tuesday.

Oliver, 38, has a string of restaurants in Britain, Australia, Dubai, Ireland, Russia, Turkey and Singapore.

He is set to open the first Hong Kong branch of his “Jamie’s Italian” chain in the city’s Causeway Bay shopping district in the coming months.

His first attempt to say “Causeway Bay” in Cantonese came out as “car crash,” while the second sounded like “bronze bed.”

“Jamie Oliver speaks Cantonese! So funny!” wrote Christy Lui in one comment posted below the video, while others called him “adorable” and welcomed him to the city.

Oliver’s first attempt to open a restaurant in Hong Kong fell through in 2009.

Known for his crusades against unhealthy food, Oliver’s restaurants, TV series and cookbooks have made him a multi-millionaire.

Jamie Oliver and his food revolution returns to TLC