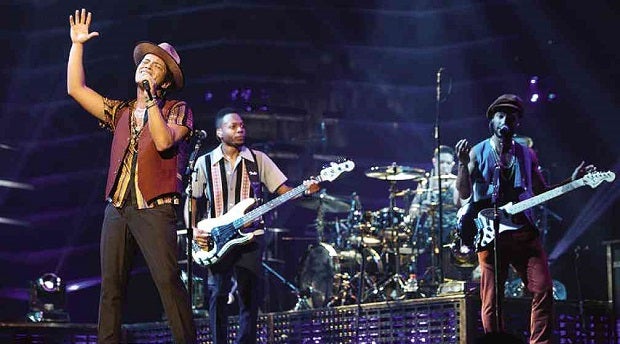 A friend was frantic. She desperately wants to watch the Bruno Mars concert on March 22 at the SM Mall of Asia Arena, but tickets were priced way too high for her budget.

She was eyeing the upper box section but found it still expensive at almost P5,000 per seat. And so she settled for general admission at P2,110.

She’s lucky to have bought one, because last Friday, tickets had sold out, according to SM.

But there’s still hope for those with enough cash. There’s one source for tickets and he may be reached at 0917-8334223. Another friend was able to buy 11 lower box tickets from him.

No, he’s not a scalper; in fact he’s a co-promoter of the concert. Log on to the Little Asia Facebook page, look for the Bruno Mars concert announcement, and find the contact person with his details. There are still tickets in the special VIP, VIP A and B, patron A and B, and lower box A sections. There’s even lower box standing room tickets.

Those watching the show will be glad that MOA Arena now has a bar inside that serves beer, wine and hard drinks. It’s at the leftmost end of the venue where the smoking lounge is also located.

There are other interesting acts coming to town this month:

Incognito is a British band known to play “acid jazz”—a 1980s sub-genre of jazz that incorporates elements of soul, funk, disco and hip-hop. In other words it’s music you can dance to, but with more adventurous, funky beats. Think Earth, Wind and Fire at its peak, but with female vocalists.

McLaughlin—“the best guitarist alive,” according to Jeff Beck, and ranked 49th in Rolling Stone magazine’s100 Greatest Guitarists of All Time list—is one of the most outstanding proponents of the marriage between jazz and rock which became known as fusion. McLaughlin took the experiment further by adding Indian classical music.

Miles Davis recruited him to play in two landmark albums—1969’s “In a Silent Way” and 1970’s “Bitches Brew”; the latter record even has a track titled “John McLaughlin.”

We first heard McLaughlin in the second edition of his band Mahavishnu Orchestra, which also featured violinist Jean-Luc Ponty. We used to go to a college schoolmate’s house in between classes and listen to Mahavishnu records. Only one word comes close to describe his music: mind-blowing.

Although it falls on the same date as McLaughlin’s concert, the Macklemore and Ryan Lewis gig will have an entirely different crowd—the hip-hop and R&B set who followed the duo’s first two singles, “Thrift Shop” and “Can’t Hold Us,” all the way to No. 1 in the US Billboard charts. Macklemore and Ryan Lewis are on a hot streak, after winning Best New Artist, Best Rap Album (“The Heist”), Best Rap Song and Best Rap Performance (“Thrift Shop”) at the recent 56th Grammy Awards.

If you can dig opera with a pop twist, this gig’s for you. We’ve seen Il Divo perform some years back at the Philippine International Convention Center. It’s not hard to appreciate the group, especially if your knowledge of opera is limited to “Nessun Dorma.” But it’s the women who would surely love Il Divo, since its members—French pop singer Sébastien Izambard, Spanish baritone Carlos Marín, American tenor David Miller, and Swiss tenor Urs Bühler—are also good-looking.

There’s one other gig we can recommend and it features a Filipino act named the William Russell Experience. The band’s frontman and chief songwriter, Russell Sobrepeña, learned to play guitar and started writing songs at a young age, but set aside his musical inclinations in favor of a corporate job.

Recently he realized life is not all about making money, and decided to pursue music again. He recorded “Russelution,” an album of all-original songs, an advance copy of which was sent to us. The 12-track CD would appeal to those who want to feel rejuvenated after hearing Russell’s bittersweet yet positive observations of life’s ironies and contradictions.

The songs remind us of the Beatles, the Kinks, and other British classic rock artists. They sound great whether unwinding with friends or going on a road trip.