Bruno Mars’ mom: ‘I knew he was special the moment he was born’ | Inquirer Lifestyle ❮ ❯ 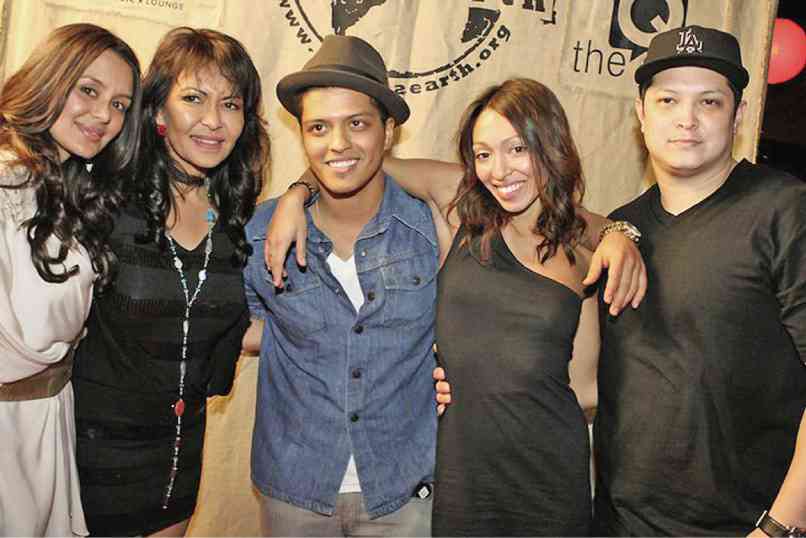 WE ARE FAMILY Bruno Mars, his mom and siblings at am.a.m.a earth event

Bruno Mars’ mom: ‘I knew he was special the moment he was born’

The first time Bruno Mars performed here was in April 2011. Watching the Grammy-winning singer-songwriter thrill the crowds in Manila and Cebu were his Filipino mother Bernadette “Bernie” Bayot Hernandez, his sister Jaime and other family members.

Inquirer Lifestyle had the opportunity to interview Bernie about raising her children in Hawaii with Filipino values, working hard to make sure her kids’ dreams were realized, and making peace with tattoos.

She and Bruno were obviously very close, from the way she talked about him. When he lit up his first electronic cigarette, he tweeted that he was quitting the real thing for his mom.

In June last year, Bernie unexpectedly died of a brain aneurysm; she was only 55. When Bruno received another Grammy for Best Pop Vocal Album for “Unorthodox Jukebox” two months ago, he dedicated his win to his mom: “Ma, I know you’re watching, I hope you’re smiling, I love you.”

Below is the unpublished interview with Bernie, along with her daughter Jaime:

At first glance, Bernadette Bayot Hernandez is your typical Filipino mom. Her bag is bursting with knick-knacks and family photos, complete with a big bag of pastillas as her baon, which she presses into my hand and insists that I try. Facebook confounds her, and she calls her daughter when she needs a photo e-mailed or when she wants to see her Facebook account, which her kids made for her.

She was horrified when her son got a tattoo, and occasionally begs him to stop adding tattoos to his body. It’s a scene we’ve encountered with our own moms, except that Bernie’s tattoo-happy son also happens to be Bruno Mars.

Tell us how you ended up in the US.

Bernie: We’re a big family. I have six brothers, and my mom was worried about us growing up, especially since my dad was the only one supporting us. My grandmother was a US citizen; she petitioned for us to join her… We were on our way to San Francisco to be with her, but had a stopover in Hawaii. It reminded us so much of the Philippines that we never made it to San Francisco. This was in 1968. I was 10 years old then.

How did you end up back here? Is this your first time to be home?

I was here 15 years ago. When Philippine Airlines was asked to be a sponsor for Bruno, Vivienne Tan, PAL’s EVP, knew that we were Filipino-Americans and wanted us to be the first family to be brought in under her pet project. She had people search for a way to get in touch with us, and my brother, John Valentine, who is also an artist, had a website, and they got in touch with him to ask if they could sponsor our family to fly back under this project.

What is this project about?

It’s PAL’s new drive to bring back Filipino-American families to come visit, get in touch with their roots, and maybe check and see if there’s anything they can do to give back to the country. When we were invited, I was really excited and grateful. I even told them my dad was an employee of Philippine Airlines before we moved to Hawaii, and they were surprised.

PAL flew nine of us—myself, my mom, my brothers John, Lawrence, Douglas, Christopher, John and Franklin, and my daughter Jaime. It was really generous of PAL; I can’t thank them enough.

What places have you visited so far?

My whole family and I were invited by (Cebu) Gov. Gwen Garcia to perform for the inmates at the Cebu Penitentiary; we all sang for them, which they enjoyed since it’s always [been] them doing the entertaining. My brother John even wanted me to do the hula, and I said he was out of his mind!

So your whole family is into music?

Yes, our whole family! My dad was a singer, my mom a dancer, so we really got all that talent. My dad used to sing to us when we were little. All my kids sing. All my brothers sing.

Every time we get together, there’s always music, that’s why when karaoke came along, which was also around the time Bruno was born, he had to fight for that mic. At age two, he just wanted that microphone, always.

Were you the one who taught Bruno how to sing?

I don’t know if we taught him exactly, but he was always surrounded by music. So it was automatic for him. Bruno, I knew he was special the moment he was born. I would like to say that he came out of me holding a mic, but of course that wasn’t the case! But he was singing even before he started talking.

I bought him a piano when he was just two, and he went on the piano and just started playing tunes, not just banging on it, but he’d play actual tunes!

He started performing professionally at four, he’d be onstage five nights a week with our group—Bruno was the cherry on the cake, he was our finale.

He’d impersonate Elvis, and Priscilla Presley actually hired him to open for a tribute to Elvis in Memphis. Elvis’ estate rarely gets impersonators but when they saw Bruno, they got him to open for the event. They paid for everything and gave us a tour of the house.

We hear Bruno has a tattoo of your name on his arm. Tell us more about it.

When he was a kid, he was afraid of needles, but when he moved to LA, I didn’t know all these tattoos were happening.  When I saw my son, I was all, “Why did you do that? Please, Bruno, don’t put any more tattoos, you have such beautiful skin, why are you gonna ruin it?”

And then he lifts up his sleeve and says “Aw, but what about this?” It was my name, and it was the full name, that’s long! And I said, “Well, okay, that one’s all right.”

What changes has fame brought to your lives?

It hasn’t changed our hearts, but the attention takes a little getting used to. I still work, but many people drop by the house, and it gets busy, and they’d ask me, “Why are you still working?” And I’d reply, “Well, what do you want me to do?” We’re all the same.

So you still work?

Yes. That’s all I’ve been doing all of my life. This is the first time that I’m actually not working, because of Bruno. He keeps telling me to relax, so I’m here, just enjoying it.

What was it like raising six kids by yourself?

It was tough, but I did it. I was a single mom. I cleaned houses—everything—just to make it work. I sewed, sold paintings. I don’t know how I managed it, to tell you the truth.

How did you feel when Bruno won his first Grammy?

I was there at the Grammys and he was nominated for seven awards, and he won the one I wanted him to win. It was kinda surreal, we couldn’t believe it. After he performed that night, he received a standing ovation, and to see that, that was incredible. Is that my son? I can’t believe it.

You mentioned a charity that you had.  What is it about?

We like to focus on grassroots organizations that need help, like the last one we did for Haiti where we helped set up a birthing center and installed a water system that lets them operate 24 hours. We want to be able to tell our donors where their money went exactly, versus donating to bigger organizations where you can’t really pinpoint what happens to your donation. It gets closer to the heart that way, I think.

What are you planning to do here in Manila through m.a.m.a earth?

Jaime: We were thinking of a way how to help, and Social Welfare Undersecretary Celia Yangco brought us to an orphanage with blind kids; she said they were in need of educational materials, so we’re working on a way to help them.

Bernie:  We really want to focus on moms and children, especially after seeing the inmates in Cebu. I mean, with the husbands in jail, who’s looking after the kids now?

Your affinity to family is evident in your choice of charity work. You really grew up close to each other?

Bernie: Yes!  Sometimes, a little too close! I remember though, that even when we were still here, my dad would always bring home hungry kids we didn’t know.  They’d beg for money but my dad didn’t believe in giving money, he’d rather bring them home and feed them. So, I got that habit, too. Whenever I see a hungry kid, I melt. I would give my last dime for a hungry child. The kids near our hotel now, they’d come running to us every day, and we’d feed them, give them pizza and candy. I was raised that way, and I want to continue that tradition of helping.

Jaime: And toothbrushes!  My mom wanted them to brush their teeth after eating all that candy!

What else have you done here, aside from that?

Jaime: We visited Resorts World, that was beautiful. From Cebu, we got a taste of the tropical vibe. I want to go back and see all the islands.

Bernie:  I like a bargain, I’m a smart shopper. I’m a seamstress, too, so I don’t buy many clothes. But I’m dying to go to Greenhills and buy some beads, since I make jewelry, too.

Tell us more about raising your kids the “Filipino way.”

Bernie: I taught my kids how to be polite, well-mannered. Coming from a big family, my mom was very old-fashioned, and I learned to carry over what she taught me. I’m so proud of my kids, they turned out so well.

Jaime: Coming back here, I realize now that I came to be this way because of my grandparents and family. The things taught to me, I see here, like respect for others, especially elders. That’s something you don’t see in other places. Everyone’s so nice and warm, very welcoming and hospitable, and I intend to raise my kids the same way.