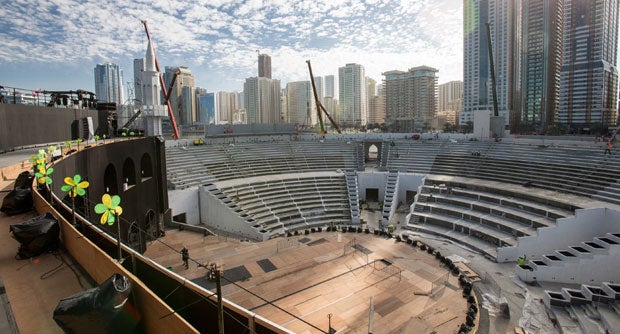 The Al Majaz Amphitheatre nearing completion in Sharjah emirate ahead of the celebration and inauguration of Sharjah as The Capital of Islamic Culture for 2014. Photo by Sharjah Media Center

MANILA, Philippines—An “unprecedented” and brand new amphitheatre worth more than $38 million is nearing completion in the United Arab Emirates (UAE) ahead of the 2014 inauguration of Sharjah emirate as Capital of Islamic Culture.

“The construction work at Al Majaz Amphitheatre – which will stage the epic oratorio ‘Clusters of Light’ on 26 March – has exceeded 90 percent completion,” the Sharjah government said in a statement Wednesday.

“The cost of the theater and the bridge leading to it exceeded AED140 million. Its use of state of the art technology is unprecedented in the Middle East, blending sound, lighting, and music in a spectacular fashion, with more than 400 animated lights, 120 sound speakers, and 21 projectors creating a unique effect,” it said.

Sharjah will celebrate its new title as “The Capital of Islamic Culture for 2014” to honor the emirate’s contributions in preserving, promoting, and spreading the culture of Islam.

Al Majaz Amphitheatre, built on a 7,238 square meter island, will be the centerpiece of the celebration and resembles an ancient Roman theater that can accommodate up to 4,500 people.

“It features a vast viewing platform through which artists can ascend, and is equipped with a high-quality and accuracy-advanced audio system that has never before been used in the region,” the statement said.

Sheikh Sultan bin Ahmed Al Qassimi, chairman of Sharjah Media Centre and chairman of the Executive Committee for the Sharjah Capital of Islamic Culture 2014 Celebrations, said that the project on the island will also include conference rooms, shops, restaurants, etc. improving its appeal as a tourist spot.

“The Al Majaz Island Project’s many luxurious facilities, which include VIP Conference Rooms, galleries, and a number of shops, restaurants and green spaces, combine to make a truly spectacular destination,” Qassimi said.

“The project aims to ensure Al Majaz Island remains a prominent tourism site, as well as providing an ideal venue for future artistic, cultural and tourism movements in the UAE in general and Sharjah in particular,” he said.

The amphitheatre will feature the “Clusters of Light” performance from more than 300 actors that come from several countries including UAE, Kuwait, Lebanon, Morocco, etc.

“‘Clusters of Light’ has been inspired by the desire for a high-ranking artistic work providing a true picture about Islam – the human values and message that promote peace, justice, tolerance, and love – to be recorded by history and engraved in the memory of future generations,” the statement said.

“The display will last one hour and 42 minutes, with the entire team – including actors, musicians, composers, directors, producers, designers and innovators – comprising some 750 people,” it said.

The esteemed Bahraini artist Khalid Al Sheikh composed the global epic while more than 70 musicians from the renowned German Film Orchestra have recorded the sound track.

“Among the participants in this landmark work are creative minds from all across the Middle East, including the Emirati artist Hussein Al Jasmi, the Tunisian singer Lutfi Bushnaq, the young Palestinian artist Mohammed Assaf, and Egyptian artist Ali Hajjar,” the statement said.