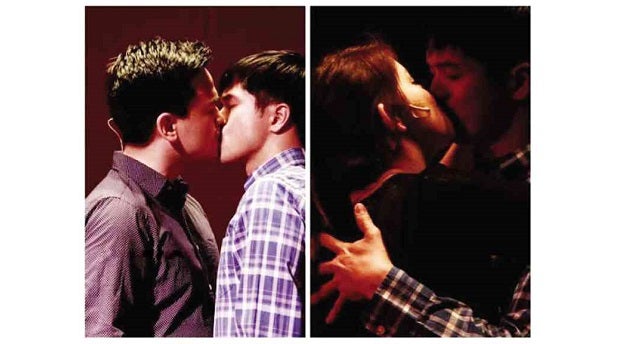 A mere kilometer from the Magallanes MRT station, in a nondescript building called Whitespace, a play of diminutive scale rages with astonishing explosive power, one that ravages the robust human façade and inflicts damaging blow after blow upon the fragile emotional soul.

This tempestuous play is “Cock,” by the British playwright Mike Bartlett, and it made landfall March 7 as the fledgling company Red Turnip Theater’s second production.

Yet, to describe this “Cock” as a sort of storm might be misleading for the unsuspecting audience member, who’d enter the venue expecting a cast of thousands and a set of wicked proportions (pun intended).

There is nothing in this theater-in-the-round that hints at physical spectacle. An overtly economical imitation of a chandelier hangs above a circular red carpet, which is flanked by low wooden barriers segregating it from the four sections of Monoblocs.

Denis Lagdameo’s set is obviously intended to be a cockpit, and unless one is a closet gambler or patron of the Pinoy pastime, the prospect of watching squabbling roosters hardly makes for an exciting thought.

Who are we fooling? “Cock” is about a different kind of power struggle: three people fighting to possess one man’s presumably priceless penis. Pardon the bluntness, but sugarcoating simply won’t do in this age of Miley Cyrus and sex-scandal celebrities.

A less risqué synopsis would go something like this: Gay man breaks up with his boyfriend, has sex and falls in love with a woman, then finds himself in the confusing middle, as both lovers try to win him over once and for all.

It is temptingly easy to dismiss “Cock” as just another gay play. (It is, in fact, the first in a string of brand-new theater productions this year to feature the homosexual lead—to name two others, Resorts World’s “Priscilla: Queen of the Desert” and 9 Works Theatrical’s “La Cage Aux Folles”).

That, however, would be a short-sighted way of viewing this play, which is so much more than just the fleeting dalliances of the modern young gay man. True, the enduring questions about homosexuality are speckled throughout the show—one of the characters asks, in Mendelian fashion, “Where is the gene?”—but they’re totally beside the point.

The single, most fitting term that encapsulates all of “Cock” appears to be “identity”—and it’s not just the kind that many an out-and-proud man grappled with back in the closet.

The beating heart of “Cock” is John, a despicable creature who appears to be no more than just a wiry human reservoir of indecision.

At the start, he and his boyfriend are already teetering on the brink of breakup; yet for the rest of the show, he will be maddeningly incapable of choosing between two people, what he wants out of a relationship, what he wants from love—basically the stuff that epic romances are made of. It is John’s perpetual state of vacillation that truly informs this play.

There are three supporting characters: M is John’s on-and-off boyfriend (“You’re like a brother,” John tells him); W is the not-so-lucky girl who scores; and F is M’s father, who appears only in the play’s final 30 minutes.

That they have single-letter names but are infinitely more resolute in their choices (in everything, really) only highlights the irony that John, as the lone character with a proper name, is the one with a murky interior and a perpetually unmade mind.

And they feed on his lack of definition. M treats John like a child, stunting his growth instead of nurturing him. F, as loving and accepting a father-of-the-boyfriend as he is, sees it fit to meddle with the messy affairs of others and manipulate his son’s relationship.

Only W is likable enough, but her being the gentlest, most generous spirit in the room (“a female, a chick, cow, bitch,” as M describes her) probably clouds judgment.

As far as subject matter is concerned, there really isn’t anything extraordinary with Bartlett’s work. Shades of Edward Albee’s “Who’s Afraid of Virginia Woolf?” are splattered all over it.

The key lies in the presentation, and director Rem Zamora’s technique is what makes Red Turnip’s “Cock” pulsate with such volatile energy. (See how the title literally spawns a myriad of puns.)

The pacing never misses a beat, the tension always kept at a maximum. And all four performers throw Bartlett’s naturalistic lines across the room like volleys of gunfire.

It’s a royal battle that actually forces the audience to choose sides from the outset: The four seating sections are named after the characters. Scenes are divided by the sound of a bell, evoking a boxing arena—and by the time this play reaches its culminating dinner scene, it has morphed into one hell of a bloody fight.

Red Turnip’s “Cock” features what should go down as the year’s fiercest quartet of actors. Topper Fabregas is an extremely infuriating John, whiny and needy and so unsure. Niccolo Manahan revels in the sheer bitchiness of M, who gets to speak both the funniest and cruelest lines.

Audie Gemora is a stern, almost reverential figure as F, until he appoints himself the middle man of the love triangle. And Jenny Jamora is especially ravishing as W, imbuing the character with equal measures of sweetness and graceful ferocity.

In this stripped-down environment, the play becomes the actors—the sharp line deliveries, the evocative use of body language, the palpable and believable emotions—as they carry the entire weight of Bartlett’s text.

That is how they become the raging storm at the heart of this little play. Zamora and his actors have virtually made it impossible for the audience to not get carried away by the sheer passionate force of their production.

In the end, Red Turnip’s “Cock” is really 90 minutes of hyper-articulate actors attempting to tear each other apart with just the deathly use of eloquent language. In the face of an entertainment scene saturated with musical extravaganzas, crowd-pleasing rom-coms, and exorbitantly priced concerts, this is an offer too delicious—and too rare—to be refused.