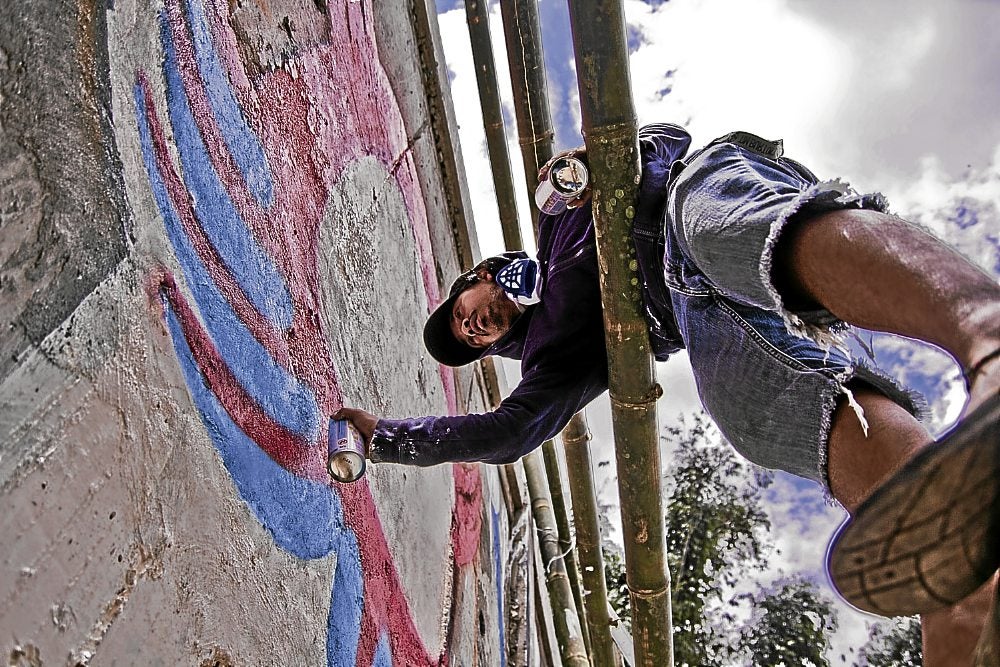 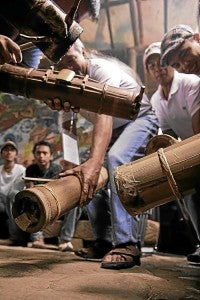 BAGUIO CITY, Philippines—Hundreds of art enthusiasts gathered at what has been called a haven for artists in Baguio City during the second Tam-awan International Arts Festival held May 14-19.

Under the auspices of Chanum Foundation and as part of the National Commission for Culture and the Arts (NCCA) Heritage Month program, the three-day event had as theme “Weaving through the Arts.”

Founded in 1998 by Chanum Foundation, Taw-awan Village is a tranquil art treasure sitting on Baguio City’s higher grounds enclosed by a canopy of evergreen. It’s really a colony of folk and modern artists.

The celebration kicked off with a cañao ritual of killing a swine, done to open a festive day. A group from the Kankana-ey tribe circled around the hog-tied swine while they performed tribal dances and chanted their rituals. After completing the rite, they slitted the swine’s neck until blood gushed out.

They cooked the carcass above a blazing flame while scraping the burnt parts of the animal, which were served to the guests. This officially marked the opening of the festivities.

During the opening ceremonies, NCCA executive director Malou Jacob said she believed the Philippines was the richest country in the world when it came to culture and arts, and said she wanted to preserve them by giving support to emerging artists.

“What we will do is answer the needs of culture and arts all over the country,” said Jacob. “One of NCCA’s projects is a grant-giving program that is already open until August.”

New NCCA chair Felipe de Leon Jr. cited the awards given out by the NCCA such as Gawad Manlilikha ng Bayan (Gamaba), the folk-artist version of the National Artist awards, which are given out to practitioners of the classical arts. 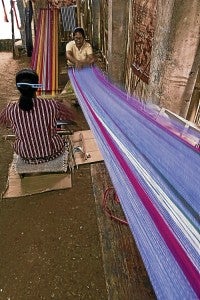 “[Gamaba] is focused on artists from the remotest areas who are practicing their art that they would pass on to people,” De Leon said. “It is to revive and keep the tradition going.”

Wandering around the village, one can definitely get a sense of Cordilleran culture, from the nooks and crannies to the wood carvings and sculptures scattered around the area and paintings of emerging artists hanging everywhere.

There were also some public demonstrations of folk weaving, carving, solar painting.

The night ended with some sing-along and drinking among the guests and the artists present.

The second day opened with another cañao ritual, after which students from Kabayan Kamora National High School gave a tribal dance and played native instruments as some foreigners joined along.

When we got back to Tam-awan Village, NCCA officials had officially opened the art exhibit, which would add to the numerous artworks displayed in the village.

On the last day of the event, a group from the Ifugao tribe gave a dance performance while playing some ethnic musical instruments.

Benny Sokkong, a professor from University of the Philippines-Baguio, gave a presentation on how to play the different musical ensembles of the Cordillera Region.

The three-day event ended with the unveiling of art installations by 10 artists.

Graffiti and traditional arts may be at the opposite ends of the pole, but Mark Tandoyog has found a way to integrate this type of modern art with the culture and the arts of Cordillera. 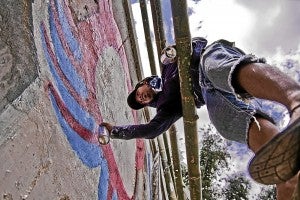 Tandoyog, a member of Tam-awan Village for 15 years, struck up the idea of having a Graffiti Art display he and other artists would put up on the wall adjacent to the village.

He contacted some graffiti artists. Despite no compensation, the artists said they were happy to be able to showcase their talent as Graffiti Art was their passion.

In the installation, the artists’ artworks depict their personal advocacies that, together, constituted the word tam-awan.

Forming the letter T of the word, Nikko Samson’s artwork of a character with a squid for the head was a representation of the different things he wanted to express through his art.

Noting the booming population in the country, Dexter Fernandez has “Garapata,” make reference to fleas, which embody Filipinos exploding in number. He said fleas had a negative connotation of being bloodsuckers. His work represents the letter M.

Bryan Araneta, whose artwork forms the second letter A in “Tam-awan,” shows his feminist advocacy through his Evita-inspired painting, saying Evita is a strong character of womanhood through her strong opposition to the oppression in Argentina.

Giving Cordilleran arts a twist, Luis Lorenzana made a “W”-shaped drawing of a bulul which he painted pink. Legend has it that the sculpture of the bulul can make those who touch it sick.

For the third letter A, Demosthenes Campos shows his love for his son Bjork in his stencil-portrait of him on the wall. He said putting his son’s portrait there showed his deep longing, especially when they would be away from each other.

Capping the collaborative graffiti work with the letter N, Tandoyog, a Nursing graduate-turned-visual artist, wanted to put a balance between traditional and modern arts with a painting of a yellow alien. His artwork depicts a person’s alienation from society.