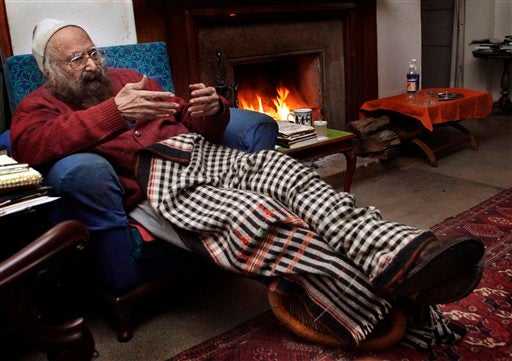 NEW DELHI — Khushwant Singh, a journalist, editor and prolific writer whose work ranged from serious histories to joke collections to one of post-Independence India’s great novels, died Thursday at his New Delhi apartment, his daughter said. He was 99.

Singh, who continued writing until shortly before his death, “passed away peacefully at home,” said his daughter Mala Singh.

A gleeful provocateur whose love of the limelight competed constantly with his disdain for fame, Singh was a self-proclaimed failure in law and diplomacy who turned to writing in the 1950s, soon after India’s 1947 independence, and quickly became a force in Indian journalism and literary circles. He remained one of the country’s best-known writers for more than six decades.

The son of a wealthy builder, Singh had a famously patient wife, a newspaper column that skewered everything from corrupt politicians to desk calendars, and a sign outside his apartment door that warned: “Please do not ring the bell unless you are expected.”

“He lived a truly creative life,” Prime Minister Manmohan Singh tweeted after the death was announced.

Singh, who often said he regretted not having sex with enough women, was one of the first modern Indian novelists to openly discuss sexuality, using often-graphic descriptions that made generations of readers blush.

“I’ve been called a dirty old man and it doesn’t bother me one bit,” he said in a 2010 interview with The Associated Press, when age and illness had begun to slow him, and a new generation of writers often regarded him as a literary relic.

Not that he cared much. Bad reviews were little more than flies to be swatted away.

“I couldn’t give a damn, he said of an extremely critical review of his 2010 novel, “The Sunset Club.” Writing, he said, “is where I succeeded. I was a flop in everything else.”

At the height of his powers, Singh was a writer of almost unlimited energy.

He rose to fame in 1956, with a short novel about the horrors of 1947’s partition, when British colonial India was carved into largely Hindu India and overwhelmingly Muslim Pakistan. Sectarian violence swept the new nations, as millions of people sought shelter across the newly created borders. Over 1 million people died.

“Train to Pakistan,” with its quiet prose and powerful imagery, remains a classic of modern Indian literature.

While born a Sikh, Singh was an avowed agnostic and staunch secularist whose books on the history of the Sikh people and religion were widely praised.

Singh, who never stopped writing, also had lengthy careers as an editor, particularly in the 1970s and 1980s. He turned a minor magazine, the Illustrated Weekly of India, into a journalistic power and also ran two newspapers, the Hindustan Times and the National Herald.

His wife died in 2002. He is survived by his daughter and a son.