If you can afford it, why not? | Inquirer Lifestyle ❮ ❯ 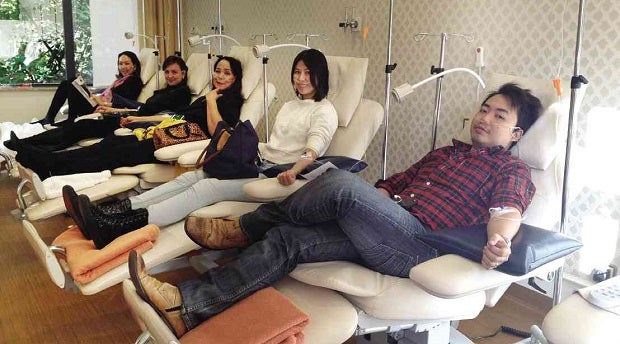 If you can afford it, why not?

If you think you need it—and if you can afford it—these are what you ought to expect when you want to undergo fresh-cell therapy in the famous Villa Medica holistic medicine hospital in Edenkoben, Germany.

You will be made to answer comprehensive questionnaires on your health and medical history, and undergo thorough blood tests. The local office then forwards the questionnaires and blood test results to Germany ahead of your trip for assessment.

Villa Medica physicians don’t recommend FCT to patients with acute infections, advanced kidney diseases, or bedridden patients, although it’s also given to cancer patients to boost their immune system for chemotherapy and radiotherapy.

FCTs are administered twice a week, so your arrival must be arranged for a Monday or a Thursday morning. A limousine from the hospital’s luxurious fleet will pick you up from Frankfurt International Airport.

(Fresh cells are extracted from donor sheep onsite, and are administered to the patients within hours. A single donor sheep will serve up to 10 patients. These are done on Tuesdays and Fridays.)

On arrival at the hospital, you’re made to fill out new forms and consult with a doctor, who goes over your medical history. Your pre-FCT photo and vitals are taken.

Blood samples will also be taken for retesting, after which you’re brought to the infusion room for detox and intravenous infusion therapy; the IV contains high-dose vitamins, trace elements, antioxidants, homeopathic preparations and biologically active substances. This takes about 30 minutes. The patient can opt to rest or go on a half-day outing thereafter.

The next morning, the patient’s vitals are checked in-room, followed by breakfast and another infusion. You can take this time to stretch your legs with a nature walk around the neighborhood, as you will not be allowed to leave your room until the next day.

By midmorning, you head back to your room and slip into comfortable clothes for your FCT. In your absence, your bed has been prepped for the treatment, with a surgical cloth laid out on it.

You will be given a mild sedative like Valium 30 minutes prior to the injections. If you have low pain tolerance, don’t skip the pill; a woman in my group would regret this later. A nurse later comes in to give you an anti-allergy shot.

Even as Villa Medica associate Cris Aquino said that I was the “perfect candidate” for an FCT after learning of my health concerns (Type 2 diabetes, osteoarthritis, perennial allergic rhinitis, severe migraines), this cynic wasn’t convinced. That I could be getting a free treatment that typically costs thousands of euros didn’t make the decision easier. I had serious reservations.

“Will I not die from it?” I managed to joke. I told him I’d decide when I got to Germany.

Being diabetic, blood extractions and collapsing veins are common rituals and occurrences for me. I don’t get queasy at the sight of blood, so it wasn’t an issue.

And up until last year, when I was diagnosed with early-onset arthritis in my hands, for which I had to take a cocktail of NSAIDs and the prescription painkiller Oxycontin for several months, I also thought I had a relatively high pain tolerance.

But to willingly inject myself with cells of a foreign species? How ironic, as I don’t even particularly like lamb meat!

In our group of seven Filipinos who flew to Villa Medica, only three were eventually given the green light to receive FCT. Unlike me, the two older women had no chronic illnesses; they only wanted the FCT for general rejuvenation. (Another one was not approved for she had unknowingly taken antibiotics prior to the trip; another’s blood pressure, meanwhile, was elevated.)

In my case, I decided the promised gains—No more pain! Less meds!—far outweighed the negative: it may not work. If there’s one thing I was convinced of after interviewing the doctors, I knew I wasn’t going to die from the FCT. It was worth the shot. “For the sake of journalism,” I said with a wink.

By the time the team of doctors and nurses in scrubs arrived in my room, I was in a happy daze from the diazepam. Dr. Ingeborg Ewen administered my FCT, intramuscular injections to both buttocks. Even with the sedative, I could feel the thick solutions invade my flesh, though it only took a couple of minutes.

Sure, the injected areas felt tender and numb for 24 hours, but it was bearable; nothing like I haven’t experienced before. You can ask the nurses for cold gel packs to soothe the numbness; I didn’t, as I slept through the afternoon after lunch, which was served in my room.

On that day, I was able to do something I never get to do on a working trip: sleep and rest—in my pajamas, on a cold winter day, happily ensconced in my room with a book-filled tablet, fast WiFi connection, a minibar stocked with local munchies, and room service.

On the third day, breakfast is still served in-room, where you wait for the doctor’s visit. They call this the “lazy day,” and you’re advised to take things slow with mild activity around the property. Meals are served at the dining room from hereon, until the patient’s departure on the fourth day.

Patients are strictly advised to refrain from any intense activity—vigorous sex and exercise—and from ingesting hot foods like coffee or tea, and alcohol, for two weeks post-FCT, as the “production of body heat may trigger the development of allergic reactions” in the form of itchy rashes, eye redness and nasal congestion, said Dr. Andre Morato.

After the treatment, Dr. Morato said the patient will go through different stages: first, the acute stage in the first two to five days, where the patient feels improvement and increased vitality. (True in my case, as I didn’t feel the after-effects of the long-haul travel or jetlag. When someone asked about the pain in my hands, I was surprised since I forgot I usually had pain in my hands!)

The second is the latency stage in the ensuing two to four weeks; the patient feels normal or a little bit weak. Regeneration starts. Thereafter is the effect stage, where “the patient feels improvement, revitalization and further regeneration is observed.”

When I inquired if the FCT failed in my case as I began to feel intermittent stiffness on my hands once more around the third week post-FCT, Dr. Morato wrote: “There was no specific treatment given to you with regards to your arthritis. Specific treatment involves an intra-articular injection of the joint with cartilage suspension in question. There was a small quantity, though, of the needed cells intended to fight arthritis complaints.”

Thus, he advised that I continue taking my glucosamine supplement if I felt that it was working. (It’s the fourth week as I write this, and I wake up pain-free, even without resuming my supplement program.) As for the diabetes, Dr. Ewen advised to wait until the sixth week to get a blood workup, to see if there’s any improvement.

Deciding to receive a treatment like FCT is easier if cost is not part of the equation, as any suffering patient is justified for trying whatever she or he thinks will work to alleviate pain. I wouldn’t have done it for any other reason. That, and professional curiosity. If it ends up not working, that’s not 15,000 euros I will never see again; it was just a momentary discomfort on my fanny.

It’s too soon to say if the FCT worked on me, but would I advise it? If you need it—and if you can afford it.