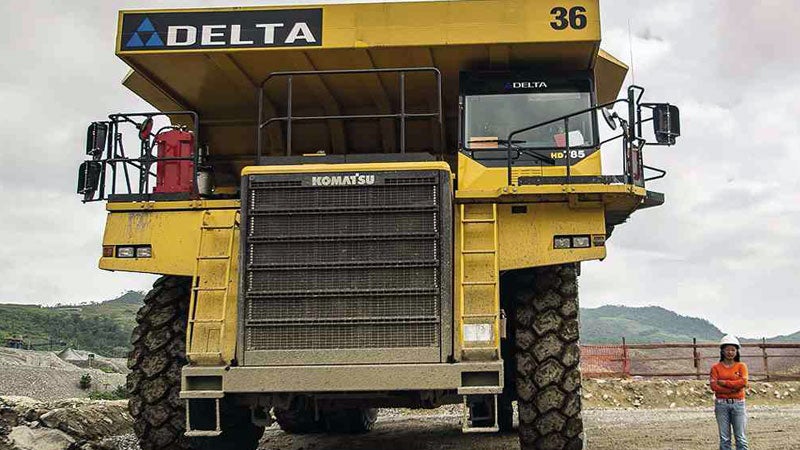 BIG JOB FOR SMALL WOMAN. Marina Bartolome, who stands 4’11”, is dwarfed by the large-scale haul truck she drives every day to the open-pit mine of OceanaGold Corp. in Barangay Didipio, Nueva Vizcaya province. RICHARD BALONGLONG/INQUIRER NORTHERN LUZON

KASIBU, Nueva Vizcaya—On any day about a year and a half ago, Marina Bartolome, 30, would be tending her three children, ages 6 to 10, while her husband operated a bulldozer at the gold project of OceanaGold Corp. in the mining community of Didipio here.

She knew little else about anything except household work.

These days, however, she grips the steering wheel of a 100-ton hauler for 12 hours daily, maneuvering around carrying ore the same weight as her truck.

“She drives that machine as it should be driven,” said a mine supervisor. That should hit two familiar birds—the woman-driver image and man-only mining—at once.

On a hilltop a kilometer away from where the Inquirer talked to Bartolome, Christine Niña Monilla would be at the control room, practically running the mine site.

Newly married, Monilla, 30, took a maternity leave from September last year to January to take care of her firstborn, a boy. Now, she is back as control room operator, a job that “makes her run the entire plant.”

And “she manages to divide her time as a mother through her 14-day-work/7-day-off roster schedule,” an OceanaGold statement said.

For an industry that even OceanaGold officials admit is dominated by men, two of every 10 employees in the mine are women. Even the labor union president is a woman.

Over the years, OceanaGold has rolled out hiring policies that discourage bullying, harassment and gender bias.

Monilla is one of 21 women who hold key positions at the mine site, according to the statement.

The Didipio mine’s hardy female employees acknowledged that working in a hard hat area was never part of their plans when they were younger.

Monilla, who graduated with a BS Chemistry degree from Bicol University in Albay province, said she wanted to be a doctor but her family could not afford to send her to medical school. She said most of her schoolmates who took the chemistry course work in laboratories.

With six years of mining experience and a near-miss in Madagascar under her belt, Monilla said the Didipio gold project was a safe working environment for women.

Accidents from moving equipment, chemical leaks and other hazards have not happened in the mine in a long time, with the plant trying to breach the 1-million-hour mark for safety, McGrory said.

Jenalyn Panti, 27, a plant metallurgist, agreed. Compared with some mine sites in the country, OceanaGold is “one of the most high-tech,” she said.

“Operators do not interfere with the processes much, so it’s safer,” she said.

Panti said she was put on a wait list in a computer engineering course at the University of the Philippines in Diliman, Quezon City, but she took up metallurgical engineering “out of curiosity.”

She recalled being surprised that a course on metallurgical engineering, “a broad field that deals with all sorts of metal-related areas,” existed. The program produced only around 20 graduates in 2008, including her, she added.

Panti said she had some reservations about going into a male-dominated industry but that disappeared after a year of work at the project site.

“It can be tiring but I’m happy with my work,” she said. “Here, men and women are equal.”

“Strong, flexible and resilient” are the words the Philippine Commission for Women used to describe today’s Filipino women in an official statement for this year’s Women’s Month. And these three, plus nearly 300 more women workers, embody these traits.

Bartolome said she joined the mining industry when Delta Earthmovers, a contractor at this copper and gold mine, said it would train locals—men and women—to drive the vehicles operating on the site.

The program was initiated by the partner companies to provide equal job opportunities for locals and nonlocals, regardless of sex.

In July last year, Bartolome learned to drive a minibus and that, according to her boss, Matt Hall, started her development into “one of the best drivers in the mine.”

“Women are generally better than men when it comes to operating a 100-ton truck,” said Hall, OceanaGold mine safety and training superintendent.

“Someone encouraged me [to learn to drive trucks], saying in other projects there were also women,” Bartolome recalled. “That gave me courage to learn how to drive.”

“I would not want her to go,” Hall said, citing Bartolome’s extraordinary efficiency at the mine.

Now, there are 23 other women undergoing advancement training for driving heavy equipment.

When asked who was the better driver between her and her husband, Bartolome answered with a chuckle: “Me, sir. I drive the heavier vehicle.”