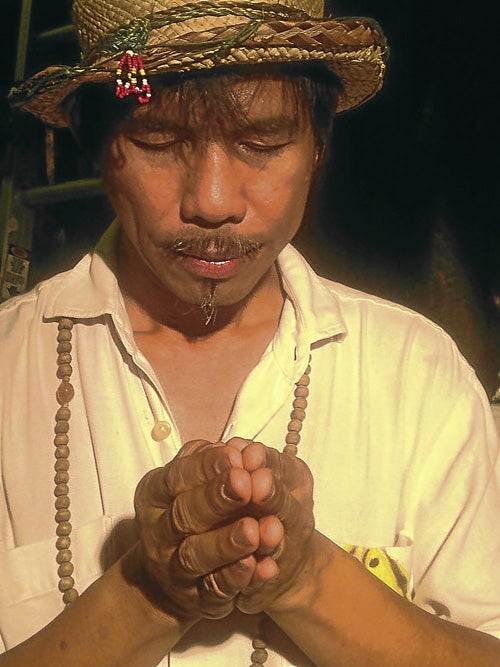 For him, it is taking the form of different artists, people from different organizations gravitating toward one another.

“I think it basically stems from the perspective that there must be a better way of doing things,” De la Torre says. “Things that worked in the past—like organizational skills—don’t work out now.”

Whether you are a painter, singer, actor, “the undercurrent, the overarching energy is, we want to express a better way of looking at reality, not to escape from that reality,” says this artist-shaman (he can visualize and describe the houses of European strangers he has just met).

The whole world, De la Torre claims, “is going through an old-age crisis, a midlife crisis, at may bago ngayon, quarter-life crisis.” The last refers to people in their 20s.

“I think most people now start young,” he says with a laugh. “It’s all about a crisis of identity, and cultural work is figuring out what is identity.”

In his view, “the consumerist culture, the materialist culture napupuna na siya sa sarili niya (is overextending itself). May pagnanasa (there is a desire) to go back to the basics, to go back to the land at the end of the day. It’s the same thing all over, you talk to the Native Americans, the tribes, the wise men, the shamans. Kahit pumunta ka sa Africa. . . ”

The pessimistic backdrop, or the context as De la Torre puts it, is “a high-pressure world in which many things are happening. Over and above that is a general anxiety about climate change.” 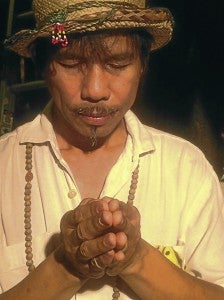 In search of his own identity, De la Torre has traveled all over the country and connected with tribes from Sagada to Malaybalay, Bukidnon.

“If you look at the way the tribes close to Mother Nature do things, there’s not much planning, you know, like sitting down in the corporate way of doing things,” he notes. “They do things, they plant, they perform their rituals in rhythm with nature. I think that’s what city folk like us have lost.”

De la Torres adds: “I think this is the matrix, this is the challenge of the new creative cultural consciousness.”

So who are the players in this apparently new consciousness?

“We are in the middle of new genres being articulated,” he declares. “We are coming up with a new genre combining the excitement of the oral storytelling (with no preconceived script) of theater and the capability of technology to capture for posterity, in other words, videography, documentation…”

These represent for him “the vitality, the diversity of our local cultures, emphasis on the plural. The Philippines is actually composed of different nation-tribes.”

And so, De la Torre tells the dramatis personae, players, individuals and groups of artists: “Let us just meet regularly. Let’s not even talk of money (he tried but failed to get funding from a local government body). Bring in your artworks, films, drums. . . and from there let’s see, let’s just interact. Hopefully, later or soon, we can come up with interactive pieces. We can share these, and later the marketing can come in.”