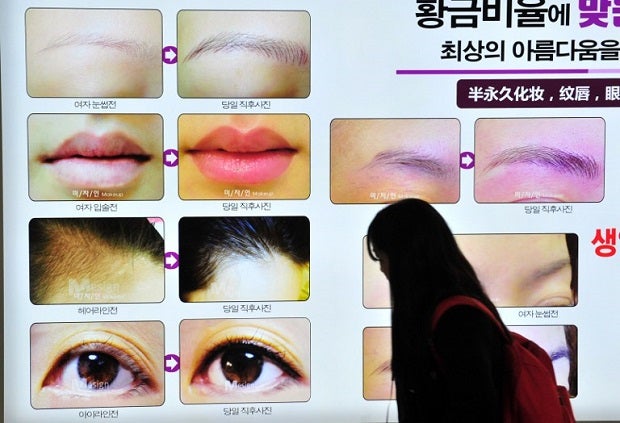 A pedestrian walks past an advertisement for plastic surgery clinic at a subway station in Seoul on March 26, 2014. The South Korean capital Seoul is to restrict the use of plastic surgery adverts on public transport, officials said, after complaints that they were fuelling an unhealthy obsession with body image. AFP

SEOUL — The South Korean capital Seoul is to restrict the use of plastic surgery adverts on public transport, officials said Wednesday, after complaints that they were fuelling an unhealthy obsession with body image.

South Korea, and particularly Seoul, has an international reputation for plastic surgery, and adverts featuring famous surgeons and giant before-and-after photos are omnipresent — on street billboards, subway trains, bus stops and the backs of bus seats.

In the Apgujeong subway station at the heart of the upscale Gangnam district — home to hundreds of cosmetic surgery clinics — around half of all advertising prints and hoardings are promoting nose jobs, facelifts and other nips and tucks.

Under the new regulations, no more than 20 percent of advertising at any subway station can be connected with the plastic surgery industry.

“We have received a growing number of complaints from citizens who say these ads further promote an obsession with looks and are disturbing to look at,” a municipal official told AFP.

“Overly sensational” before-and-after shots and slogans will be banned, he added.

The adverts will also be prohibited in areas such as bus stops close to elementary, middle and high schools, said city council official Lee Chang-Min.

“Many people complained these ads make people, including youngsters, believe that plastic surgery can be done so easily,” Lee said.

Earlier this month a 34-year-old woman died of asphyxiation while having surgery on her nose and a man in his 30s died three days after undergoing a procedure on his jawbone.

Last December, a high school girl fell into a coma while having a nose surgery.