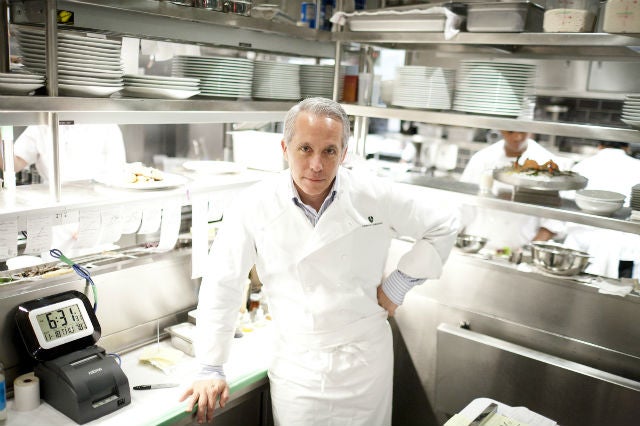 A four-colored feast with Cignal Digital TV and Colours

MANILA, Philippines – Colours and Cignal Digital TV brought one of the greatest culinary icons of all time, Chef Geoffrey Zakarian, to Manila Thursday, March 20. Dubbed “Feast of Four Colors,” the dinner gala featuring the renowned chef presented a five-course meal to some of the most discriminating foodies in the country.

At the gala, diners were treated to live classical music by the Philippine Philharmonic Orchestra. Broadway and West End veterans, also real-life couple, Isay Alvarez and Robert Seña made a surprise performance.

To the delight of Manila’s elite who came to “Feast of Four Colours” in droves to sample his cuisine, Chef Zakarian put on a cooking demo of all the food that was served.  Of the five courses, two demos were on AVPs recorded earlier in the day, the other three were all done live.  In keeping with the event’s theme of fusing east and west, the main course was the most quintessentially Filipino dish of all, adobo.

To prepare for the event, Chef Zakarian experimented with several kinds of vinegar to see which would produce the best result. He also played with different pork and chicken cuts, eventually settling on pork belly. For a final twist, he added a few ingredients not typically found in adobo. The result was an incredible mix of evocative, well-loved flavors and textures mixed with new sensations that all at once seemed exotic and new, yet integral to the dish.

Adobo was not the only Filipino-inspired dish served though. Four of the five delicacies were Chef Zakarian’s very own versions of these Filipino foods. Part of Chef Zakarian treatment involved adding ingredients not readily available in the Philippines. Chef Zakarian insisted on flying in many of the more exotic ingredients. This made his five-course menu much more special.

“Feast of Four Colours” was the second ultra-high-end lifestyle event organized by Colours for the benefit of a charitable organization. In 2012, Colours and Cignal Digital TV culminated fashion week with the Colours Gala, a fashion show featuring the 2013 collection of former Harrods creative director and London-based fashion designer Lesley Mobo. It was after that event that Colours made a commitment to hold similar lifestyle events regularly.

Proceeds of the event went to the Philippine Disaster Recovery Foundation, the country’s first permanent and year-round private sector vehicle for disaster management.