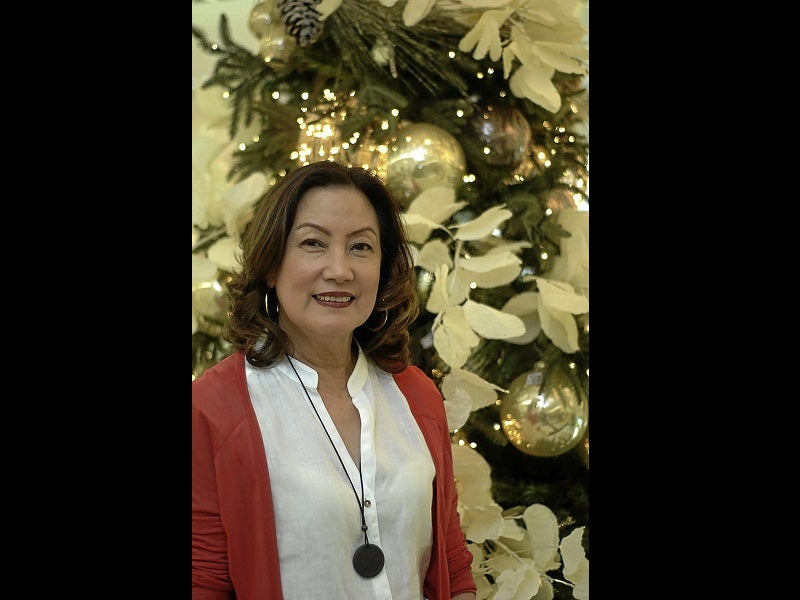 Christmas is coming early –Nena Tantoco is making sure 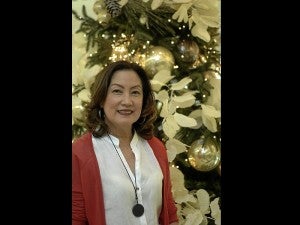 Christmas is a big deal in the Tantoco home, as it is in a typical Filipino family.

Nena Tantoco, daughter-in-law of Rustan’s founders Bienvenido and Gliceria Tantoco, finds immense joy in decking out her own and her now-married children’s homes for the holidays. She does it every year without fail.

This annual holiday decorating tradition is, in fact, a spillover of Tantoco’s duties as head and supervisor of the visual merchandising team of the department store chain.

And, like in the Tantoco household, Christmas couldn’t come soon enough at Rustan’s, which now has The Christmas Shop on the fourth-level Home section of Rustan’s Makati fully festooned for the holidays. 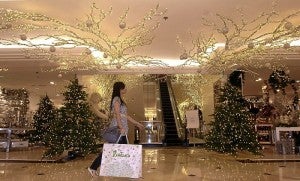 Rustan’s is taking a serious eco-conscious bent with its overall theme this year, with real dried leaves and twigs as predominant tree ornaments and decor. The retail floor has canopies of rice-lights-gilded dried tree branches, barely painted white, as if dusted with the first snowfall.

Unlike last year when the twigs were awash in white, like a blanket of snow after a blizzard, Tantoco wanted to achieve a more subtle white-Christmas look this year. (“We Filipinos always like that white-Christmas effect,” she notes.)

The monotony of all-white twig accents is broken by a sprinkling of dried leaves, including some oak from a Christmas fair in Atlanta, USA.

But Tantoco is especially proud of the tree near the glassware section. It’s adorned with white leaves and inspired by the “butterfly tree.” The leaves resembling the winged creatures come from the butterfly tree, dried and treated to get the texture of crisp paper. They are made for Rustan’s by women workers in Pampanga, according to Tantoco. 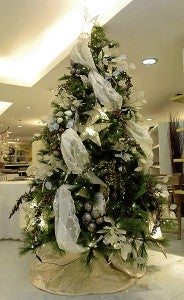 “It’s laborious, but it’s environment-friendly and gives the women jobs,” she says.

Another is adorned with pine cones in varied sizes, and more twigs. There are also wreaths made of magnolia flowers and leaves.

For the Filipiniana tree, Tantoco and her crew—Ross Morante, Zenas Pineda, Andi Esimos, Peewee Celino and their team—continue with the nature theme, only this time, the leaves are made of capiz. It also has mini capiz parols and a swag of embroidered piña silk from Silk Cocoon.

The kids’  trees are more traditional, with stuffed animals and Santa on one; the other, a traditional American, embellished with candy canes, tinsel balls and icicles.

“When you’re decorating a tree for kids, it always has to be colorful, so I hang toys. There are stockings with their names on them,” she says. “We say it’s for kids, but don’t they also bring out the kids in us?” 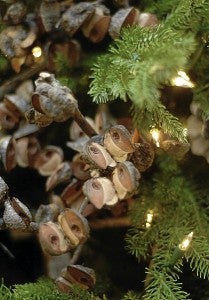 Tantoco tells of a version of the legend of the Christmas tree, one that she says is both sad and uplifting.

The first Christmas tree, she says, was in wartime Europe. Soldiers who missed their families lit cigarettes and stuck them in evergreen trees, the only trees with leaves in wintertime. “The cigarettes were like candlelight and the leaves didn’t burn because they were wet from the snow. The bit of greenery reminded the soldiers of home.”

She adds: “Christmas evokes joy and peace. The gifts we give symbolize our love. At Christmas, we set aside our problems and give in to the merrymaking.”

It’s not unusual for Rustan’s customers to want to buy the entire tree with all its ornaments, says Tantoco’s daughter-in-law Dina Tantoco, marketing communications manager of Rustan’s. Some even ask to have their homes decorated exactly like The Christmas Shop (Rustan’s Flower Shop can recreate the preferred look for their top clients).

“It’s very important for our family to spend Christmas together,” says Tantoco. “When my mother-in-law was still around, she encouraged the kids to be in the store during Christmas season. When they started The Christmas Shop, it was only a small part of the Home floor. Now it’s the entire department store.” 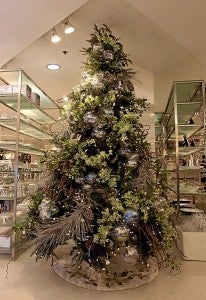 In her own home, Tantoco tends to recycle her existing Christmas tree and décor, merely updating them every year. (They do the same at Rustan’s; the giant stuffed polar bears from last year are also incorporated in this year’s décor.) She goes traditional at home, with the ubiquitous stockings bearing the names of family members.

She also hangs small picture frames on the tree, and has little cornucopia bearing messages for her children.

She does the same in her children’s homes. “You know, I ask them what they want…” Tantoco says. “But you don’t need to, Mom, you always do a great job,” cuts in Dina, who’s pregnant with her third child.

While Tantoco’s décor might vary each year, a constant is the Nativity scene. “You have to have one,” she says. “It’s the most important. It reminds us of the reason we’re celebrating Christmas. The abundance that we have, it’s because of Baby Jesus.”