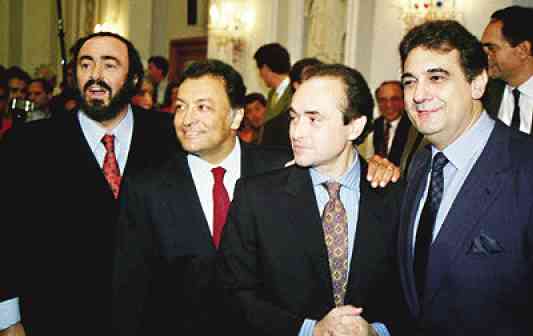 The Three Tenors concert phenomenon is nearly a quarter of a century now. This year is the 24th anniversary since that memorable performance at the ancient Baths of Caracalla in Rome on July 7, 1990, featuring tenors Placido Domingo, José Carreras and Luciano Pavarotti. Of course, the latter is gone now, having passed away in 2007 at age of 72.

In the concert, the tenors  were accompanied by the orchestras of Maggio Musicale Fiorentino and Teatro dell’Opera di Roma under the baton of Zubin Mehta.

All three distinguished tenors had performed in Manila at one time or another, starting with Domingo (as Cavaradossi in “Tosca” at the Cultural Center of the Philippines in 1979), and Carreras and Pavarotti in 1994 at the Philippine International Convention Center.

In his recent Facebook posting, Carreras noted that on  March 1, 1997, the Three Tenors gave their only concert in Australia, at Cricket Ground in Melbourne, 17 years ago.

Both Carreras and Pavarotti were conducted by Sydney-based Filipino conductor Julian Quirit in one of their Australian engagements.

It may be noted that the Three Tenors’ success led to worldwide imitations. In the Philippines, an unlikely Three Tenors were former Marikina Mayor and Metro Manila Development Authority chief Bayani Fernando,  former Senator and Laguna Gov. Joey Lina,  and the late Gen. Angelo Reyes.

The remaining two of the original Three Tenors are a study in  vocal durability.

At age 72, Domingo is active as concert soloist and conductor, and singing baritone roles in “Simon Boccanegra,” “Rigoletto” and “Traviata” (as Germont), and “Nabucco.” He is in the recent Met productions of “The Enchanted Island.” Before 2013 ended, Domingo had sung 144 different roles in opera. His motto can be seen on his Facebook: “To rest is to rust.”

At age 68 and a leukemia survivor,  Carreras is just as active as Domingo, concertizing all over the world. He is touring at present the Middle East and is preparing for his new opera, “El Juez-Los niños perdidos” (The Judge-Lost Children).  The world premiere will take place at the Teatro Arriaga in Bilbao on April 26 with him in the title role. The cast includes soprano Sabina Puértolas, in the role of a journalist working on a report about missing children in Spain in the 1950s.

Two Filipino pianists—Rowena Arrieta and Jovianney Emmanuel Cruz—are prizewinners of the José Iturbi piano competitions named after pianist Iturbi, who was the conductor when Carreras debuted in a Barcelona opera house as El Trujiman and narrator in the “De Falla  Master Peter’s Puppet Show.”

Son of a traffic policeman and a hairdresser, Carreras told this writer during his 1994 Manila visit that he was inspired to take up singing at the age of 6 or 7; his family had watched a film called “The Great Caruso” starring Mario Lanza. “At that time, I was instantly fascinated by the personality and charisma of Lanza. I think that film had a tremendous impact on me because from that moment on, I was obsessed with becoming a singer.”

The only member of the Three Tenors who has moved on, Pavarotti sang in Manila in 1994 and created a stir when  the late Sen. Blas Ople  said the lowest ticket price (P3,000) for the concert was already the equivalent of the monthly pay of a government janitor. Ticket prices ranged from P15,000 to  P25,000.

The organizers were  Bert Nievera and his wife, with Rosemarie Arenas as executive producer.

During his first and last press con in Manila, Pavarotti told this writer he was just retracing the footsteps of his teacher, Arrigo Pola, who sang in Manila in the mid ’50s, notably with soprano Remedios Bosch Jimenez, the mother of Arenas.

When this writer told him that other great Italian tenors like Ferrucio Tagliavini and Franco Corelli had sung in Manila before him, Pavarotti replied: “Tagliavini and Corelli are the greatest tenors of all time and if I am able to do at least half of what they have achieved in their time, I would be very happy.”

Pavarotti, then 59, caught cold on the day of his Philippine debut, which was reset two days later.

Asked by Jullie Yap Daza if he considered himself the world’s greatest tenor, Pavarotti replied with a firm no. “But if you insist, what can I do?”