It’s (a) moving day for the family that doesn’t rest on its laurels | Lifestyle.INQ ❮ ❯ 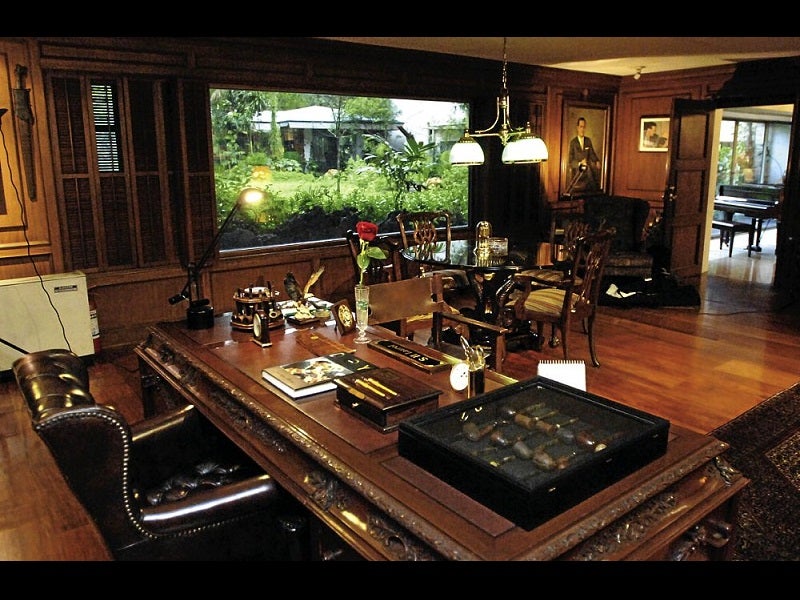 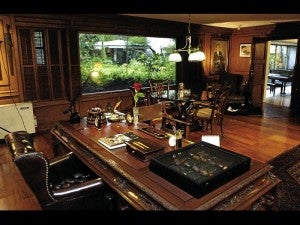 On entering Shaw Boulevard from Edsa in Mandaluyong City, one can’t help but notice a well-manicured tract of prime lot with two 1950s houses, a shadowy one and a larger vintage structure with a stretch of off-white walls. The first house on the right is Doy and Celia Laurel’s.

“We are leaving this place,” says Celia Diaz-Laurel, widow of the former senator and vice president, who died from lymphoma at 76 in 2004. “It’s hard for the children, as they’ve been so attached to it. We’ve stayed here for 57 years. Especially Cocoy [her son, singer and actor Victor]—he’s quite attached to places. He’d been offered jobs abroad, in London, but he chose to stay in the country.”

Last month, the house was sold to a business group. 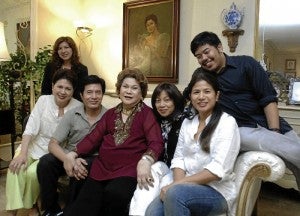 “That was Doy’s wish before he died,” says Celia. “He said the area had become too busy and commercialized. Also, the house is quite big, its maintenance has become very expensive.”

She receives the visitors in the salon, still looking youngish. An Ilongga, she exudes sweetness and light, though wheelchair-bound and dressed in dark burgundy glistering with stone-and-metallic trimmings. She is all smiles as she recalls the story of the house.

In 1953, Salvador “Doy” Laurel, a Yale law graduate student and the fifth son of wartime Philippine president José P. Laurel, met a mysterious old woman in Massachusetts. She offered him a cup of tea, then read the tea leaves at the bottom of the cup.

The clairvoyant told him that right after graduation he’d win his first case and from his lawyer’s fees would build his first house.

Upon his return to Manila that year, Laurel joined his father’s law firm. Assigned the Magdalena Estate Profits Tax Case, the neophyte lawyer managed to reduce the tax to zero, thereby winning the case with which four well-known lawyers hadn’t prospered. 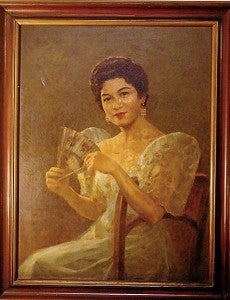 “My father-in-law gave us a portion of his lot in Mandaluyong, and with his first legal fees Doy built our first house,” says Celia.

The Laurels found the design of their dream bungalow in House and Garden magazine. They hired architect Antonio Gabriel, who advised them against a one-story structure, considering the country’s weather conditions.

The architect gave a cost estimate of P75,000. Doy made a P40,000 loan from a bank to start construction, and added 50 percent of his legal fees to build their dream house, phase by phase, starting in 1954.

It was a split-level house, what they called a half-house when it was becoming trendy after the war—a modest, compact structure with three bedrooms and a study upstairs; two staircases (exterior and interior); kitchen, dining room and sala downstairs; plus patio (with fishpond), lanai (with aviary), and barbecue pit.

The children’s rooms were designed by Wili Fernandez, writer Doreen’s husband and Doy’s classmate at University of the Philippines.

Prominently displayed in the salon was a Wurlitzer spinet piano, which Celia describes as their “proudest possession” at that time. As the family grew, and as Doy had to receive and entertain more and more clients and visitors, features had to be added to the house. Under the bedrooms, for instance, was constructed a rumpus room for the kids, with retractable screens, which also served as a function room for parties.

The expansion and renovation went on through several decades, paralleling the growth of the family. Construction stopped only when resources ran out, then resumed as soon as Doy would win a case.

In 1957, Doy started building a bigger structure in his father’s nearby lot. This came to be known as the Laurel Mansion (recently sold to Sen. Manny Villar).

“When we were starting a family, we were still schooling, and Doy’s parents were supporting us,” Celia relates. “So when he began making money on his own, he had that house built as a token of gratitude to his parents.” When neighbor Jobo Fernandez transferred to Makati, the Laurels were given first priority to buy his 2,600-sq m lot. And as there was more lawn than the house needed, five smaller structures started sprouting on the borders: four townhouses and a pelota court.

So now the house sprawls in a compound on a 4,600-sq m lot along Shaw Boulevard, hidden from view by a concave screen of foliage. It is a wide and thick clustering of palmeras, shrubbery, vines, aerial plants, philodendrons, over a pool.

“Doy had that put up to screen off the busy street and as sound-proofing,” says Celia.

Dipping toes in the water is a life-size Guillermo Tolentino sculpture of a lithesome Celia. The body cast was originally in the nude but her in-laws complained, so the future National Artist had to scantily clad the figure. A copy of this has been installed in the middle of the lawn near the swimming pool, under a gazebo-like bower of flowering vines.

In the garden, amid shrubbery, vines, gnarled trees and palmeras, is a marker inscribed with “I’m the Lord’s Gardener.” Here is another Tolentino sculpture, of a nude boy pissing into a koi pond, modeled on Cocoy as a child, a copy of which is half-hidden among vines under an ancient tree nearby.

Across the lawn is the pelota court now turned into a gallery, which also serves as a social hall. It houses Celia’s paintings, her portraits of her children, nudes, blown-up images of flowers. (She was one of National Artist Fernando Amorsolo’s top students at the UP College of Fine Arts. “We were just trying to be like the master,” she says with a shy smile.) 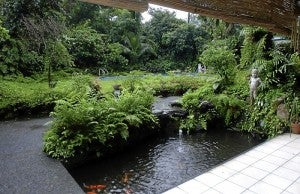 The exterior staircase to the bedrooms had long been demolished, as Doy deemed it dangerous at night.

The aviary is gone and its space is now part of the dining room.

The lanai had been covered and in its place the living room was expanded and Doy’s study constructed.

The interior looks bright and airy, suffused as it is by tones of white, cream, slate-gray, light brown, silver, gold, and lots of crystals and glass.

Scattered from wall to wall are Celia’s and Cocoy’s pieces in oil and pastel. Cocoy has an ethereal portrait of his mom in pastel; and a Christmassy Madonna and Child limned in oil on a wooden tabletop, mounted on a wall of a passageway, adorned with putti.

On one side of the living room is a wall of sliding glass panels looking out to the garden and swimming pool. The central wall is covered with embossed mirror, a 1954 Amorsolo portrait of Celia and the framed study of the portrait.

On a corner is the Yamaha piano at which musician Ryan Cayabyab used to practice when he was staying with the Laurels while studying at UP Conservatory of Music. The vintage Wurlitzer piano is now installed in the rumpus room, in front of Celia’s large still life of a driftwood. 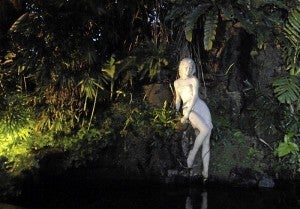 Probably the most interesting feature of the house is Doy’s study, which the family has left as it was before he died—one can practically smell the scent of his tobacco.

The room, designed by architect Pablo Calma, has a flooring of wide wood planks and a picture window of plate-glass looking out to the garden. The shadowy room is illumed by various lampshades, droplight, student lamps.

To the right of Doy’s heavy desk is a large portrait of his father, President José P. Laurel.

Doy’s chair is in quilted leather of glossy black. The ornately carved table is laden with glass and metal curios, book, rosary beads, numerous tobacco pipes. Before it is a director’s chair with leather seat and sling-back.

Behind the desk is a wall of built-in cabinets and shelves brimming with books and framed photographs, and a mirrored central panel bordered by louvers.

The room’s reception area has a leather sofa set under a row of LED spotlights; a lectern; wall lined with shelves of more books. It is dominated by Doy’s official portrait as vice president of the republic.

Opposite is a glass-topped round table with Chippendale ribbon-back chairs, beneath a Victorian drop lamp with brass base and frosted-glass half-globes.

On walls and nooks are Cocoy’s collection of swords; Doy’s golf clubs; an Amorsolo portrait of Doy; a photo of him playing the violin.

When the Doy Laurel-Cory Aquino candidacy for president and vice president was being hatched in 1985, it served as a sort of war room.

Plus, Cayabyab, his colleague Nonong Pedero, and people from Repertory Philippines (where Celia designed 80 productions and acted in 55 plays) had good times in this place.

It is now seven years older than the age required by law for it to be protected as a heritage structure. Aside from being a cultural monument, it is also, obviously, a historical site.

The Laurels are vacating the place in November. Except for Cocoy, who stays in the house with his mom and the household staff, the other Laurel children and their families occupy the townhouses on the border of the property. They, too, would leave.

The mass exodus leaves everyone forlorn. Celia is resigned. She’ll be living in a condominium at The Fort with Cocoy, who had been asked by his dying father to look after his mom. The Laurels are planning a farewell party at the place.

“I don’t know, there’d be no furniture by then—but there’s always the pelota court,” says Celia. “The contract says ‘until end of the year,’ but that would be around Christmastime, so…”

Doy’s longtime aide Zechener Rubido says the study will be taken piece by piece and reconstructed in a 4.5-ha lot on a hill in San Pedro, Laguna, where the Laurels have a resthouse and a museum.

As if foreseeing a bright future, Celia enthuses: “You should visit that place. It has lots of trees. Doy said it’s like Central Park.”

Something essential, at least, will be preserved, of that vision a mysterious old woman in a faraway place foresaw, so long ago.