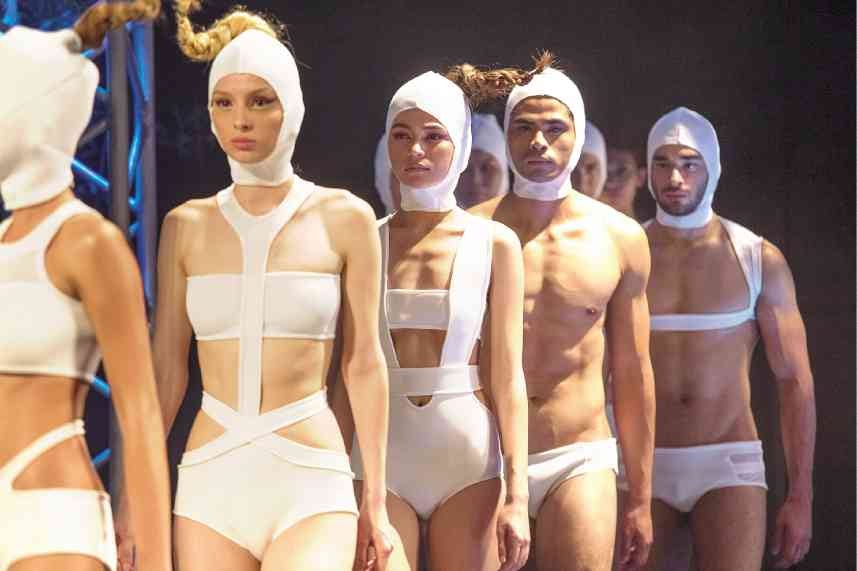 Designer Francis Libiran channeled the future to produce a 35-piece collection of neoprene swimwear, mesh skirts and sculptural dresses and separates to mark the opening of Century City Mall in Makati City two weeks ago.

Libiran and director Robby Carmona made the most out of the fourth level’s semi-outdoor venue by incorporating such visual flourishes as dramatic lighting and dancing fountains to produce a show that was a cross between “Star Wars” and “2001: A Space Odyssey.”

The lights shone underneath some clothes, which were embellished with battery-powered LED lights that glowed on and off in the dark.

“Lights always give a statement,” said Libiran. “They were inspired by the Century City Mall’s magnificent lighting. Those lights were digitally programmed and inserted carefully into the clothes.”

The designer immediately heated things up by opening with barely there numbers worn with nonchalance by Filipino and foreign models.

The futuristic look was reinforced by Nereku’s strappy white sandals and high-heeled Lucite shoes. For summer, Libiran limited his palette to off-white, powder blue and salmon. The designer also used digitally printed fabrics, which he himself designed based on Century City Mall’s circular logo.

He limited the prints to light blue, dove gray and turquoise. In an obvious homage to Princess Leia of “Star Wars,” leading model Ria Bolivar, in a printed ankle-length dress, sported the character’s trademark side buns.

Like most of the pieces in the collection, Bolivar’s backless, side-baring dress with an extremely high slit on the front showed plenty of skin. Libiran also had such details as origami-like

“The Century City Mall’s futuristic and modern feel was my main inspiration,” he said. “I guess it’s in keeping with my concept of ‘fashion of the century,’ which is a reflection of the mall. In fact, I love everything about the mall, from its futuristic and open layout to its shape.”