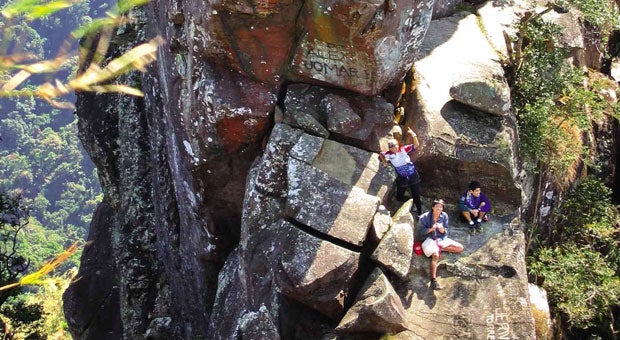 MOUNTAINEERS’ DELIGHT So called because of its friendly trails. Shaped like a parrot’s beak, Pico de Loro in Maragondon, Cavite, and Nasugbu, Batangas,, is 2,178 feet high. INQSnap this page for photos and a map. JILL LEJANO/CONTRIBUTOR

You don’t have to be a hard-core mountaineer to climb mountains.

Take it from Mike Abanes, who has been guiding people up mountains for 17 years now. Abanes, a member of Outdoor Addicts who discovered his passion for mountaineering in 1992, has climbed so many mountains here and abroad that he has “lost count.”

It was in 2005 when he first noticed that more people— families, barkada (group mates) and officemates—were developing an interest in mountaineering. “It has become easier and more convenient for people,” he said of the pursuit.

“We used to need a week or two to be able to climb mountains outside Luzon because we would travel by boat. But with airlines now offering promo fares, weekend climbs have become possible,” he added.

Abanes also noted that more outdoor gear businesses have set up shop in the country, making it easier for people to buy reliable mountain-climbing gear and equipment. “Dati sa ukay-ukay lang may North Face (It used to be that only secondhand clothing shops had North Face-branded gear),” he added.

So, no more excuses! Add to your summer bucket list this list of 10 beginner-friendly Philippine mountains rated according to difficulty by Abanes himself.

Mt. Samat, an extinct volcano, is so easy to climb that you can actually do it while riding your car. There’s a road all the way up to Mount Samat National Shrine, which was built in honor of Filipino and American soldiers who fought during World War II.

Located in a town known for its beach resorts and dive spots, Mt. Gulugud Baboy (pig’s spine) takes its name from the shape of its peaks. You’re bound to encounter cows and goats while climbing this grassy, scenic mountain.

Enjoy the unique experience of a twin hike by climbing both Mt. Manalmon and Mt. Gola. You can also go spelunking at Bayukbok Cave, cross the Monkey Bridge and go for a swim in Madlum River.

Years after its destructive 1991 eruption, Mt. Pinatubo has become a favorite among hikers and mountaineers. After a bumpy ride on a four-wheel drive vehicle and an occasionally slippery hike, visitors are rewarded with the incredible view of the crater lake called Lake Pinatubo.

Mt. Pulag is the third-highest mountain in the Philippines. Because of the high altitude, climbers need to be prepared for cold weather. The best months to climb Mt. Pulag are from November to March. There are several trails—Akiki from Benguet province, Tawangan from Ifugao province and Ambaguio from Nueva Vizcaya province—but the friendliest for beginners is Ambangeg from Benguet. Most people who climb Mt. Pulag are hoping to witness its rolling sea of clouds. Some get lucky on their first climb but others have reached Mt. Pulag’s summit multiple times without seeing this fantastic view.

A popular day hike destination, Mt. Batulao is a favorite among weekend campers because it is an easy trip from Manila. The trek offers a great view of Balayan Bay and from afar, there are rock formations that look like a dinosaur’s spine.

Mt. Kalisungan may be considered historical, as it is believed that this was where retreating Japanese soldiers last fought American and Filipino forces during World War II. Today, this mountain offers an incredible view of Laguna province, including the Seven Lakes of San Pablo.

Named after a figure in Philippine mythology, this dormant volcano’s contours are said to look like a reclining Maria Makiling who, according to legend, is the mountain’s guardian. This popular hiking spot has two trails but the University of the Philippines Los Baños trail is easier and more commonly used.

CLIMB EVERY MOUNTAIN, BUT STAY SAFE

Acknowledge and understand the risks.

Be physically and mentally fit.

Look for a guide you can trust.