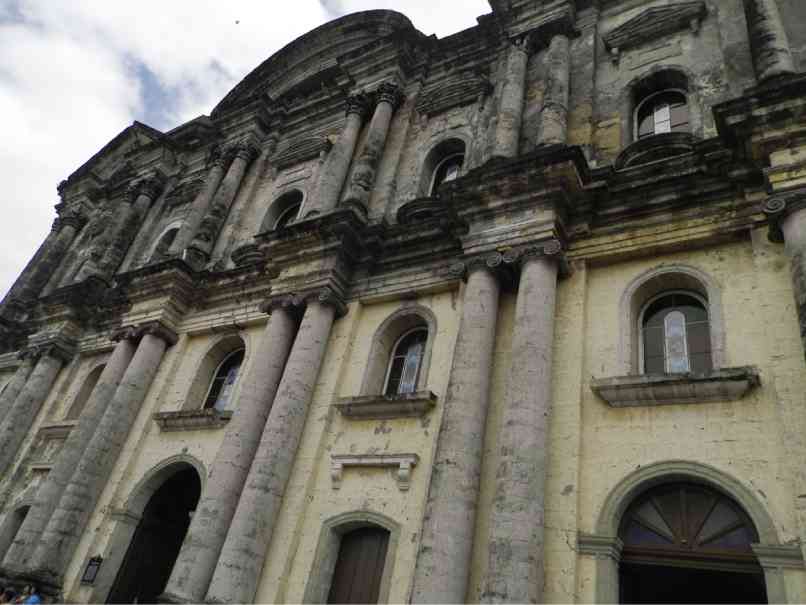 EVEN if Taal Basilica is considered aminor Basilica, it is the biggest Catholic church in Asia.

There is a local term among the Taal folk: “Taal-ywood.” This was coined Taal, Batangas, became a favorite cost-efficient shooting location of TV and film productions.

Aside from being relatively accessible from Metro Manila, Taal has a charm that is enhanced by history—and that’s easy to feel in just one day.

If you want a quick getaway this Lenten week, Taal is it.

Prepare your playlist for the three-hour road trip and experience the countryside on a happy note.

Going to Taal is actually quite easy. Set out early because Holy Week is also homecoming period.

We took the South Luzon Expressway, proceeded to Star Tollway onto the Lipa, Batangas, exit. From there, drive past Fernando Airbase, turn right as you see Tristar Motors. Pass Cuenca, Alitagtag to Taal proper.

Stay left as you see a Flying V gas station at an intersection. Enter Taal Poblacion and go down the main road.

The facade is yellowed and dotted with moss. Inside it is airy and the vibe light and pleasant. This should be a good destination for your Visita Iglesia.

Calle Marcela Street alone is an escape from city life, and the here and now. The street is picturesque. Take a selfie as you pass the Galleria Taal owned by Manny Innumerable. It’s the door with typical Spanish colonial design; you’d know it’s the right house when you spot the vintage cameras at the lobby.

The cameras on display are part of Innumerable’s collection. You can also see here the only photo that documented Dr. Jose Rizal’s execution at Bagumbayan.

Farther down the road is an old house named Casita, which looks hip and retro. You wouldn’t expect to see it in a neighborhood of bahay na bato. Displayed on the wall are Nora Aunor ads—when she was still a  teener—and there’s Café Tampuhan, the only quirky coffee stop in Taal. It has kapeng barako.

In the same neighborhood is an art gallery put up by the famous sculptor Ramon Orlina. Taal’s young artists exhibit here or sometimes, they do live portraiture. The gallery is on the ground floor of Orlina’s ancestral home, the Casa Gahol (not open to the public).

Villa Tortuga is a bed-and-breakfast place that delivers a  quintessential 19th century lifestyle experience by letting its guests wear Maria Clara, camisa de chino and the garb of that period.

Still farther down the road is the house of the “Mother of the Philippine Flag,” Marcela Agoncillo. Her house is now a museum, honoring her role in the Philippine Revolution.

At Villa Tortuga, you must have sinaing na tulingan, the staple fish dish in a Taal household. It is seasoned with salt and wrapped in banana leaves and cooked in a clay pot—the way rice is cooked.

Adobo sa dilaw is chicken adobo cooked with turmeric instead of soy sauce.

For vegetarians, there is sinopas na malunggay that is quite refreshing, using malunggay leaves.

The lunch and dinner end with thick chocolate to be taken with suman. Every bread and breakfast establishment in Taal knows these dishes by heart.

Don Juan of Taal restaurant has all of these options and also has boodle meals, if you want to be adventurous.

Apart from kapeng barako, Taal has other food pasalubong options. It is also popular for its longganisa and empanada. The Taal  longganisa is bit salty and sweet. It’s the meat that is best enjoyed on Easter Sunday.

The empanada is unique—aside from its chicken or pork meat stuffing, it has vermicelli noodles and veggies. It’s a veritable full meal.

Proud of their produce and culture, the Taal folk organized the El Pasubat Festival. It is a mix of letters coming from the products they are famous for: empanada, longanisa, panutsa, suman, balisong, barong tagalong, tapa, tawilis, tulingan and tsokolate.

If you want more of Taal, this festival should be on your list of post-Lent activities. This event is set for April 26-27.