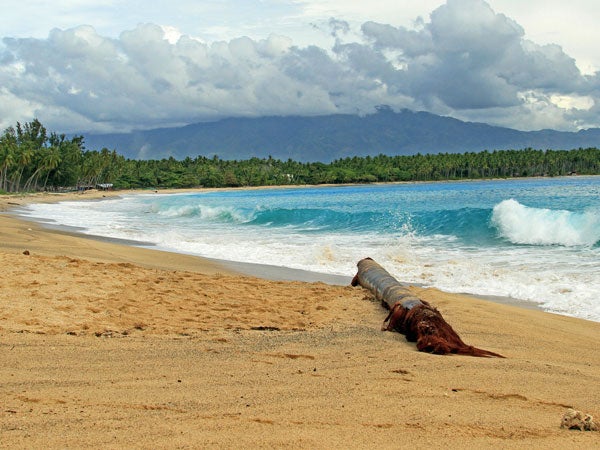 CITY, Davao Oriental—Children as young as 7 ride wooden boards and glide adroitly over foot-high swells that break against the long stretch of white sand beach. It’s a sight that has turned the coastal village of Dahican here into a prime surfing destination in southern Mindanao.

The crescent-shaped beach some 7 kilometers long has become a playground for intrepid sun-scorched sons of fisherfolk out to conquer the wind-whipped waves foaming at the blue Mayo Bay.

Located on the eastern coast of Davao Oriental province facing the Pacific Ocean, Dahican’s powerful waves and high winds make it ideal for surfers and skimboarders most of the year.

“In Dahican, there’s no peak month. All year round is peak season,” added Moring, who heads the agency tasked to protect Dahican and its rich ecosystem.

Less than 10 km from the provincial capitol, Dahican’s well-paved roads are accessible to all types of vehicles.

The local government has initiated a campaign to turn Dahican into a top tourist destination and a center of economic activity, said Dashiel Indelible Jr., Mati city tourism officer.

“Little by little we want to turn Dahican into a top-notch destination without compromising its pristine beauty,” he added.

Already, Dahican’s well-paved roads have attracted investors and spurred economic activity in the seaside community, leading the Department of Tourism and the Department of Public Works and Highways to pour some P200 million worth of infrastructure projects into the place. Most of the projects are road networks totaling some 20 km that make Dahican accessible to the city proper.

Six resorts dot the beach, spurring more interest among investors outside Mati.  The city government has joined the fray, entering into a 15-year lease on a 2.5-hectare beach-front property to build facilities for day tourists in an effort to initiate investments from the private sector.

Despite the slew of improvements, Dahican remains “a beach for everyone,” said Indelible.

“We don’t allow resort owners to fence off [portions of the beach]. We want people to [be able to] walk from end to end off the entire coastline,” he added.  “The building of structures and facilities is properly regulated.”

In fact, the place has become a showcase for ecotourism, “with its rich marine life and various species of sea turtles, sea cows, dolphins and that gentle giant of the deep seas—the massive butanding (whale shark) found or sighted off the village, said Moring.

Arranged boat tours could give tourists a chance to witness firsthand the thriving marine life of the bay.

Joseph Velasco, a 29-year-old tourist from Cavite, also cited Dahican’s underwater sights.  “My relatives in Davao City said the beach here was nice, and I wasn’t disappointed,” he said, as he prepared for another round of snorkeling on a sunny Wednesday afternoon.

Fisherfolk, who used to abuse the bay’s bounty, have become its protectors.  They have been enlisted as reef rangers and members of the 40-member Bantay Dagat (Sea Sentinels), which ensures the preservation of Dahican’s natural beauty.

Dahican has become one of Mati’s tourism jewels, drawing most of the more than 40,000 tourists who visited the city last year, about 1,700 of whom were foreigners, Indelible said.

While affordable accommodations can be found in most of the beaches in the village, Dahican is also ideal for backpackers and day tourists who can pitch their tents or spread picnic mats on the white sand.

Peace and order is not an issue, as Dahican is near a thriving community of Christians, Muslims (predominantly of the Kagan tribe) and indigenous folk, who have been living harmoniously for decades, local officials said.  It is far from where communist rebels are known to operate, they added.

Adding life and color to the once quiet stretch of beach known to be the hatching ground for various sea turtle species is  the growing popularity of skimboarding, with the children of local fisherfolk being its most active enthusiasts.

Known as the Amihan Boys, a group of 20 or so boys are making waves in local tourism for popularizing a sport that many would associate with the surf culture of the US Pacific coast.

Pedro Plaza, 28, said his elder brother, Jun, founded the group a decade ago after watching the sport in the movies.

Initially using plywood planks as skimboards, the Amihan Boys have attracted admirers and supporters among tourists who have seen them riding Dahican’s huge waves. The boys now use sturdy boards made from marine plywood.

A member of the group,  Sonny Boy “Bayogyog” Aporbo, a 20-year-old out-of-school youth, has won in skimboarding events in Malaysia, Hong Kong, Australia and even in California, said Plaza.  “He’s very talented. The younger members look up to him,” he added.

The Amihan Boys are also known for advocating the preservation of various marine life in Dahican, and have become partners with the Department of Environment and Natural Resources in protecting the village’s sea turtles.

In the last four years, the Amihan Boys have helped release to the sea about 15,000 sea turtle hatchlings, from such species like olive ridley, hawksbill and leatherback, said Plaza.

The boys also conduct skimboarding lessons and rent out skimboards to tourists for a minimal amount, a source of funds for themselves, Plaza said.

“The sea is clean and perfect for skimboarding. I’d love to recommend this place to my friends back in the States,” said the American retiree from Florida who is married to a Filipina.

From Davao City, Mati City is three hours away by bus (with fare ranging between P130 and P250). At the Mati City bus terminal in Madang, one can hire a habal-habal (motorcycle for hire) for P40/person to Dahican, some 10 to 15 minutes away.