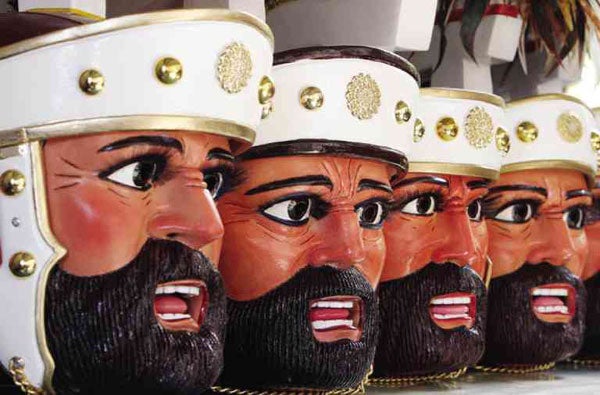 Wooden masks, which sell for P4,000 to P5,000 each, are used during the Moriones Festival, one of the oldest religion-themed festivals in the country. The annual weeklong tradition starts with a grand parade of the Morions on Holy Monday in all six municipalities of Marinduque province. “Morion” derives from the crested metal helmet with curved peak in front and back worn by soldiers centuries ago. INQUIRER FILE PHOTO

Ka Oti never kept any photographs or used any models for the bearded, fierce-looking masks, his interpretation of how the Roman soldiers and Syrian mercenaries of the Passion story looked like.

His interpretation was inspired by an actor who played Hercules in a movie that he saw when he was young and that image, he said, was etched forever in his memory.

Manay, 70, is the oldest Morion mask maker on the island and the last in Boac town, the provincial capital.

In the neighboring town of Mogpog where the Moriones Festival originated lives Salvador “Buddy” Liwanagan, 52, the go-to guy for the more elaborate Morion masks.

Once, he made a mask that looked like Joseph Estrada, an order from a Moriones performer who wanted to resemble the former actor and President who is now mayor of Manila.

Orders come from Morions in the rest of Marinduque province and from local and foreign tourists who want souvenirs of one of the oldest religion-themed festivals in the Philippines. While there are other mask makers on the island, Manay and Liwanagan are the most popular.

Although referring to the performers who portray the Roman officers and Syrian mercenaries of the Passion story, the term Moriones is derived from morion, the crested metal helmet with a curved peak in front and back worn by soldiers in the 16th and 17th centuries, as did the Spanish soldiers who came here with the conquistadors and whose livery was remembered in local art, with their morions being reinterpreted as helmets and masks of the torturers of Jesus.

That is hundreds of years far off but the historical confusion does not matter in the century-old Moriones tradition.

Manay’s and Liwanagan’s helmets are invariably plumed, an indication of a lack of knowledge of ranks in the Roman army. And the masks are invariably bearded, again indicating ignorance of Roman military grooming: Like the Greeks, the Romans shaved their beards and they imposed the discipline on the foreign mercenaries who helped them hold their client states.

But, again, all that doesn’t matter. The Moriones Festival, a local interpretation of the Passion story, is the highlight of the Lenten season here, drawing thousands of pilgrims and tourists.

Locals wear 1st-century Judean costumes to match the Morions’ simulated Roman bronze cuirass and leather rigs as they parade around the town under the sun, followed by the tourists who enjoy the spectacle and the heat, which they don’t have year-round in their countries.

The mask is the most important part of the Morions’ costumes. Carved out of santol or dap-dap wood, each mask, which comes with a Roman or Syrian helmet, weighs at least 2 kilograms.

Liwanagan buys wood from locals, who source it from Marinduque’s forests. A dap-dap trunk costs P500 while santol, a harder material, goes for P1,500. Liwanagan said he could make more than 30 masks out of one trunk.

So does Manay, although he used to gather the wood himself from the forests when he was younger.

To old people in this town, playing Morion at least seven times is an act of penance. Others, like Manay and Liwanagan, say playing Morion brings good health and answers to prayers.

“I’ve been one, way more than [seven times],” Manay said.

Manay started to play Morion when he was 17. He remembered that he was suffering from chicken pox at the time and he was alone. He decided to turn to God for healing.

“It is only God we can turn to when we’re alone. [Playing Morion] has become my vow,” he said.

Manay was 20 when he made his first Morion mask for a contest that he and three friends joined.

“I used to buy [Morion] masks made of papier-maché for 50 centavos each until I thought, ‘Instead of buying one, why not make my own?’” Manay said.

Liwanagan said he, too, wanted to own a mask, so he tried making one when he was in high school.

Both mask makers do not have any formal training in art or wood carving. Manay would watch wood-carvers of religious images in Manila’s Quiapo district whenever he was there to work part-time in construction projects.

Liwanagan said his knowledge in wood carving started as a hobby.

The mask makers attribute today’s steep price to increasing costs of materials, such as the paint, wood and trinkets used on the Syrian headgear that they call “turban.”

“But it really is the labor that we charge for,” Manay said.

Manay produces about 10 to 15 masks a year and he starts making them in December. Still agile and sharp for his age, he can finish a mask in 20 days.

Liwanagan, who has two helpers since he also makes other wooden icons, can finish three masks in a day.

He said he had always wanted to organize young mask makers who would take their place and preserve the tradition, but he did not have enough funds for training.

“Unfortunately, we don’t see any new blood [of mask makers] yet,” said Manay, whose children and grandchildren, although also Morions, never showed interest in mask making.

“The youth today, their interest is in computers and gadgets,” he said.

“It is believed that people then did not participate in the [Lenten] activities of the church and preferred to drink tuba (coconut wine) instead,” Asuncion said.

The Moriones tradition spread throughout the island, with Boac becoming the center of festivities in recent years.

The festival reenacts the folk story of Longinus, the one-eyed Roman soldier who pierced the side of Jesus on the cross with a lance.

The story goes that the blood and water that spurted out of Jesus’ side hit Longinus’ blind eye and restored his sight.

After witnessing Jesus’ resurrection, Longinus converted to Christianity and started spreading the word about the miracle, the reason he was beheaded by the Morions.

The annual weeklong tradition, drawing “hundreds of thousands,” Asuncion said, opens with a grand parade of the Morions on Holy Monday simultaneously in all six municipalities of Marinduque.

In the evening of Holy Wednesday and on Maundy Thursday, the “cenaculo,” a stage play about the events leading to the crucifixion of Jesus, is held in Boac’s town center. This is followed by the Via Crucis, or Way of the Cross, on Good Friday and the reenactment of the crucifixion at 2 p.m.

The “pugutan,” a reenactment of the beheading of Longinus, takes place on Black Saturday, followed by the “salubong,” the traditional meeting of the images of Mary and the Risen Christ at 4 a.m. on Easter Sunday.

Marinduque villagers reach out for ‘Tukluhan’