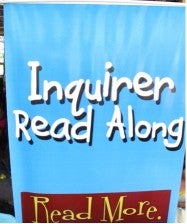 MANILA, Philippines—Eat right. Save the earth.

Stories about conserving the earth’s resources and the importance of good nutrition were the focus of Saturday’s Inquirer Read-Along session, which featured teen stars Elmo Magalona and Janine Gutierrez, and Sophia School principal Ann Abacan.

The event was held at the Inquirer main office in Makati City.

Magalona and Gutierrez read Rene O. Villanueva and Lem Garcellano’s “Si Inggolok at ang Planeta Pakaskas,” a story about an edible planet and an individual who worries about how the planet is slowly deteriorating because of abuse and gluttony.

“They were very eager to read. The story was nice, too, because it’s kid friendly,” Magalona, a first-time storyteller like Gutierrez, said of the close to 100 children who attended the session.

Magalona said the biggest challenge in storytelling is to make the children believe in the story, which proved to be no problem at all when he saw that the kids were very cooperative.

He said he found storytelling fun because it was just like talking to his younger siblings.

“They were really participative so it became easy for us. I enjoyed spending time with the kids and I felt that they enjoyed it as well,” Gutierrez said.

She said she found no difficulty getting the kids to listen and keeping them interested in the story.

“My take on the story is that we should take care of our environment. Let’s not waste our resources but be more protective of what we have. I hope this is what the kids learned from the story, too,” Gutierrez added.

Abacan read Amang Medina’s “Ang Siopao na Ayaw sa Batang Matakaw,” a story about a group of haughty siopao (meat-filled buns) that refused to be eaten by a poor boy but changed their minds when they found out that he was hardworking and had a pure heart.

For the kids, the session was nourishing for both mind and body. They were served healthy food during the event courtesy of Healthy Options, with volunteers from the natural food store and Hands-On Manila lending a hand.

From the stories read, the children talked about the different lessons they learned.

“I liked the story of Ate Janine and Kuya Elmo because it taught us to conserve and to moderate greed,” said Angelica, 8, a first-time Read-Along participant from Virlanie Foundation.

Shiela, 12, also a first-timer from ChildHope, learned the value of selflessness from the story read by Abacan. “We should not waste food and instead share it with others,” she said.

Magalona said that when it came to food, he and his family had always been prohealth. “Children should start eating healthy while they are still young because it becomes a habit. Staying healthy could add years to your life,” he said.

Ariel de Leon, digital marketing associate of Healthy Options, described the session as “a great event.” “The stories read were in line with the message we want to send about conserving food and avoiding food wastage,” he said.

Meryl Ligunas, a first-time volunteer, said the activity was enlightening as it helped less fortunate children. “Instead of spending my Saturday doing nothing, this is a productive way to involve myself in the community,” she said.

Read-Along teaches anyone can be leader, hero