Paris Hilton shows what dream beach living in the city is all about | Lifestyle.INQ ❮ ❯ 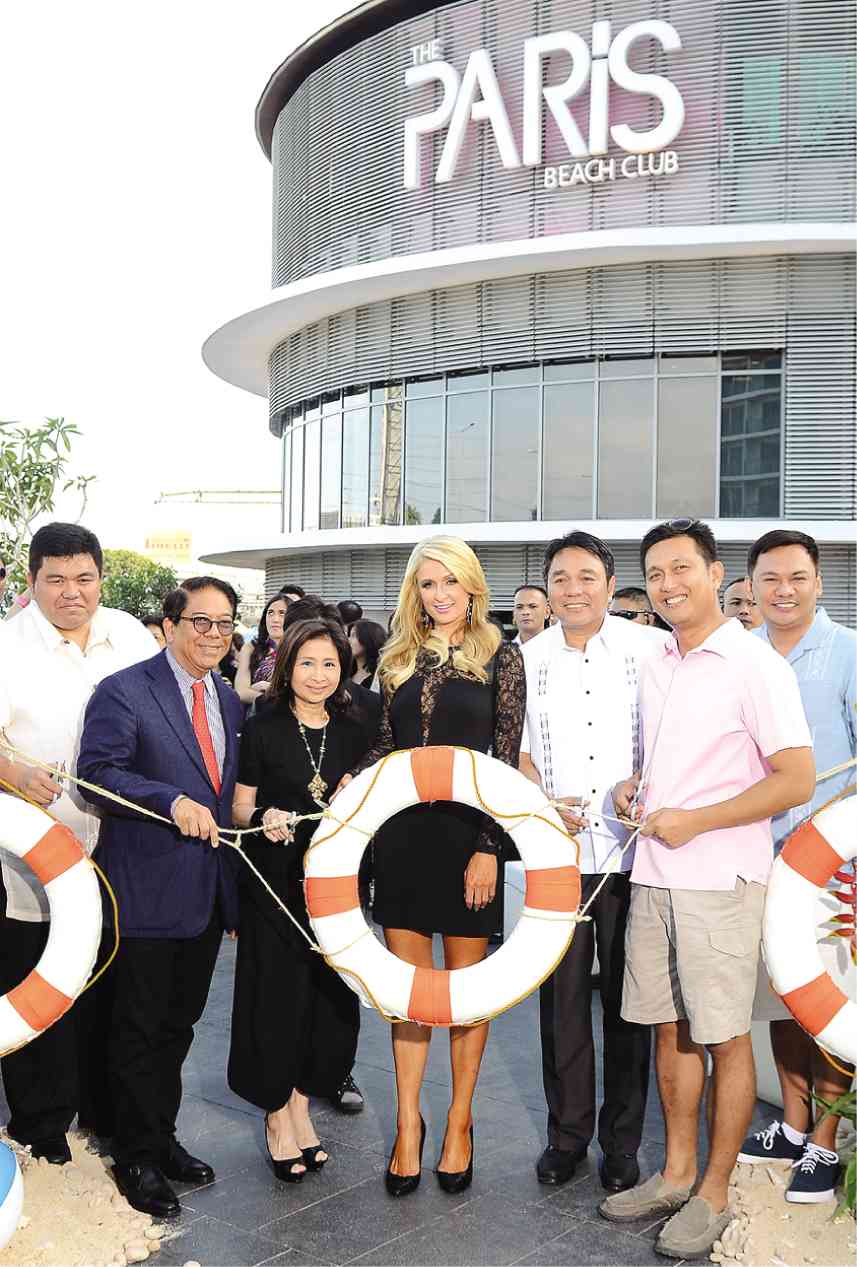 Cosmo Manille was in a tizzy with the arrival of gorgeous heiress Paris Hilton, who was back in Manila to inaugurate the Paris Beach Club, the très exclusive clubhouse for residents of Azure Urban Resort Residences in Parañaque City.

Property developer Century Properties Group had other plans in mind, dahlings, to make her visit not only official but also tons of fun, the way this multitalented gal is. So after the ribbon-snipping ceremonies at the Paris Beach Club, the bash got underway.

“There is no better way to showcase and celebrate this beach-inspired development than holding a beach party,” said Century Properties chief operating officer John Victor Antonio. “We’ve already pulled out all the stops to make this residential community a place unlike any the country has ever seen, so we thought of mounting something as exciting.”

As the sun began to drop behind the ocean, music blasting from the DJ booth mounted before the lagoon pool of Azure had everyone on their feet. But nothing proved more electrifying to the crowd than the sight of Paris Hilton, naturellement, who gamely jumped in and joined the fun by sweeping into the DJ booth to spin her own choice of tracks.

Not to be missed was the entire Antonio famille of Century Properties: Ambassador and business whiz Joey Antonio with his stylish wife Hilda Reyes A.; John Victor “Jigger” with head-turner wife May Muñoz; Harvard man Marco Antonio and wife, New York city gal Jackie Cohen; and Carlo and wife Cat Arambulo with children Danielle and Asher.

The party set came in full force, dahlings, led by Tessa Prieto-Valdes, Chris Tiu, Robbie Carmona, Maricel Laxa and Anthony Pangilinan, among others. Models dressed as mermaids added attraction to Azure’s cool lagoon pool. On the shore was a robot hoofing it up amid glowing jellyfish lanterns, which lighted the beach area.

Azure residents were there in full force to enjoy the highlight—a magnificent, seemingly endless fireworks display that lit up the Azure night sky—while sipping on endless booze.

“The Paris Beach Club and Azure were created to give our residents a consummate beach life experience,” said John Victor. “This is a fitting celebration for all our residents and clients who only once dreamed of beachside living in the city. Now it’s a dream come true for all of us.”

Another fab project is in the works between Century Properties and Paris Hilton, palangga—and why not, given this winning combination?

Speedo, that renowned swimsuit brand, unveiled its Spring-Summer Fashion Show recently to a standing-room-only crowd at Glorietta Activity Center. The show offered a fab selection of multifunctional swimwear, beachwear and accessories centered on the theme of “Evolution.”

The chic designs reflected Speedo’s mission to harness new techniques and improved performance for its products, whether for competitive sport or just plain leisure. The swimwear was perfectly showcased on the gorgeous bodies of the hunks and women on the ramp. Speedo Fit ambassadors Dennis Valdes and wife Tessa Prieto-Valdes shared the runway space, dahlings, much to the delight of the guests.

“At the heart of this is the Speedo Fit proposition with a focus on helping fitness swimmers improve their technique,” said Speedo International regional business development manager Harry Singh. “They’re also designed in line with a color and graphical inspiration based on themes of interactive technology, deconstructed graphics and manmade technology to create the understated look preferred by many who swim for fitness, while still offering a sense of modernity and function.”

It’s beachtime again, palangga, and there’s nothing better to wear to the sand and sun than Speedo’s Spring-Summer collection. Speedo’s concept shops are located in most high-end malls, and it’s soon to open, too, in Fairview Terraces.

When it comes to totally noteworthy happenings out there, one of the best is the annual Consular Ball. The 38th Annual Consular Ball, held primarily for charity, lived up to longtime tradition as the highlight of the diplomatic-consular set’s calendar, dahlings.

This time, the event raised P1 million for the relief and rehabilitation of survivors of Supertyphoon “Yolanda.” The donation was turned over to the Department of Social Welfare and Development even before the actual ball, palangga, through Foreign Secretary Albert del Rosario, who was handed the donation by the Dean of the Consular Corps of the Philippines, Canada consul general Steven Chapman; along with ball chair and Monaco consul general Fortune Ledesma; her co-chairs, Gambia consul Agnes Huibonhoa and Tanzania consul Betty Chua; plus other members of the corps’ executive board such as incoming Dean of the Corps for 2014 George Yang, who is also Eritrea consul general, dahlings.

More than 550 invitees filled up the tastefully decorated Rizal Ballroom of Makati Shangri-La. Foreign Secretary Del Rosario was the guest of honor. Naturellement, the largest contingent at the ball was from the US, the consular officers and their chosen invitees, dahlings, led by US consul general Donna Blair.

To add more spice to the already wow evening, exciting prizes were raffled off, among them airline tickets, cruise ship accommodations and gift certificates to resorts.

This was one grand diplomatic ball where all the chic guests definitely had a ball, dahlings!