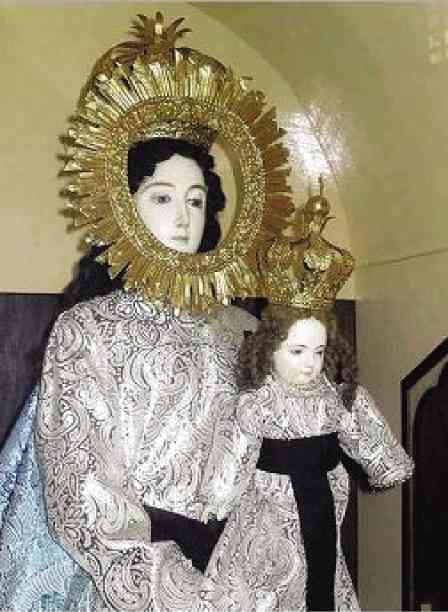 For the past decades, a number of important santos or religious icons have been stolen from either churches or exhibitions. Most  remain unrecovered.

In 2004, a 300-year-old image of the Child Jesus was stolen inside the San Agustin Church in Intramuros. A task force was set up for its retrieval but 10 years on, it is still nowhere to be found.

The latest to fall prey to thieves is the ivory image of the Santo Niño of the Virgen de la Consolacion y Correa in Betis, Pampanga. It disappeared during a church event last December,  but was recovered a few days afterward in Manila but minus the wooden body.

Also still missing are the head and hands of the iconic Virgen del Carmen of the San Sebastian Church in Manila.

The incidents should indicate that intense religious devotion  has also fanned the theft and illegal traffic in sacred images, said Billy Malacura, a culture and heritage teacher at Escuela Taller Intramuros, the Spanish-funded school which seeks to revive Hispanic colonial era arts and crafts, especially masonry and construction.

“Religious devotion in this time and age also requires vigilance,” he said. As part of vigilance, parish priests and church leaders should have a proper inventory of works of sacred cultural patrimony in their churches.

But Regalado Trota Jose,  professor of the Master of Arts program in Cultural Heritage Studies of the University of Santo Tomas and former commissioner of the National Commission for Culture and the Arts, said it is not really religious devotion that’s driving up the trade in stolen sacred works, but greed and the inordinate passion for antique collection.

Malacura said priests and parish leaders should be aware of lost church cultural properties as well as those transferred, repaired, borrowed, changed and  on storage.

It would be all right, he explained, if the stolen object circulated in the local market because there would be greater chances for it to resurface, be traced, and eventually recovered.

“But if it goes to the foreign market, it’s almost like a dead end,” Malacura said.

Jose said as long there’s a market for stolen religious antiques, there will always be theft and illegal trafficking—“if not here, then abroad.”

As more and more people are engaging in online commerce, dealers of stolen ecclesiastic and liturgical arts are starting to use the Internet to sell the stolen products disguising them by other names.

“Santos are being sold online,” said Malacura. “And for the provenance not to be traced or questioned, the names of other santos are changed.”

He said the image of Santa Rita of Cascia appeared a few years ago in an online marketing site. The saint is popular among Filipinos since she’s considered miraculous and she comes in the aid of people in dire straits who pray to her, so her icon online didn’t raise any suspicion among church heritage advocates.

But some heritage proponents checked the photograph online and after much comparative study, found it to be that of the  missing icon of Santa Monica stolen from an ancient church in Bohol.

The devotions to St. Rita and St. Monica are promoted by the Augustinian Recollects who were among the pioneering missionaries of Bohol. Santa Rita herself was an Augustinian nun and Santa Monica was the mother of St. Augustine of Hippo, who, although had lived in the 4th century, was considered by the Augustinian congregations, founded only in the late 16th century, as their spiritual father.

The National Museum of the Philippines, particularly its Cultural Properties Division, is tasked to protect national cultural properties which include religious art and imagery.

Under Presidential Decree  374, the division is tasked to register cultural properties owned by private individuals and collectors; license dealers, agents and exporters of cultural properties; and investigate reported violations of the law.

Aside from registration and license issuance, needed are documentation of cultural properties, and research and information dissemination.