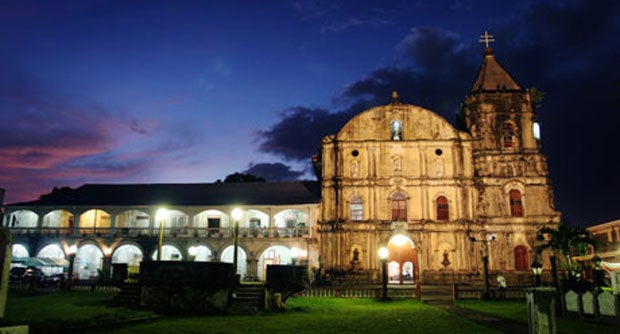 LUCENA CITY, Philippines—For the rural folk of Tayabas City, one of the oldest localities in Quezon province, the religious art of palm frond weaving is a tradition that has to be sustained and passed on to future generations.

“The art of palm frond weaving has long been a part of our culture. Our youngsters have to continue this beautiful tradition,” Maritess Padua, 39, told the Inquirer as her hands braided fresh palm fronds on a sidewalk near St. Ferdinand Cathedral in the downtown area for the Palm Sunday rites.

Her elder sister, Trinidad, who also has a stall selling braided palm leaves, said it was their late grandmother, also a native of the place, who taught her and her siblings palm frond weaving.

“Our late grandmother also learned the craft from her own folks. The practice is now being handed from generation to generation,” Trinidad said.

“There are also other workers in our village. But I want to earn some extra cash that’s why I’m also here,” she said.

The Padua sisters said what they earned was enough to spend only on some extra items during the Holy Week.

“But we’ve been doing this not only for the extra cash but also to keep the tradition going. For us, that is what’s important,” Maritess said.

Just a few meters away, Cristy Bañadera, a resident of Barangay Central Wakas, also in Tayabas, said all of her eight children also learned the art of palm frond weaving.

She said her children, just like most of the children in the village, learned the craft even before they started going to school.

“Since most youngsters are all on vacation and want to earn some cash for themselves, palm frond weaving entices them,” Bañadera said.

One of Bañadera’s sons, Ricky, 21, and his wife, Rosemarie, were also busy weaving their own designs on their sidewalk spot beside Bañadera.

Ricky said he learned the art of weaving when he was 15. “As long as I’m in our village, I will continue weaving ‘palaspas’ (palm fronds) for Palm Sunday. I’m already used to it,” he said.

Palm trees are common in Tayabas farms. Some of the palms fronds were cut from their tree a week ago, Maritess said.

The sellers cover the braided fronds with newspapers to prevent them from turning brown due to wilting.

Fresh palm leaves can be braided into all sorts of plaited and decorative patterns like crosses, a crown of thorns, stars, angels, among many other typical designs inherent in Philippine folk art.

The vendors of palm leaves sell their religious merchandise with the standard braided design—a small ribbon in its handle—at P15 a piece and the specially braided designs at a higher price.

Other palm weavers from Tayabas also sell their religious products in public markets and churches in Metro Manila and nearby Calabarzon (Cavite, Laguna, Batangas, Rizal and Quezon) provinces.

“I also know how to weave but I prefer selling this time,” he told the Inquirer.

He said he had earned an average of P200 from selling but gave a big portion of the amount to his mother and kept some money for himself for computer games.

On Palm Sunday, during the blessing rites, some of the vendors brought their products to the patio so they could also receive the blessing of the priest.

The blessing of the palaspas is the highlight of Palm Sunday Church activities to commemorate Jesus’ entry into Jerusalem.

After the blessing, the faithful bring home the blessed palm leaves. These often become fixtures near the main door of the house and windowsills in the belief that they guard dwellers against evil spirits.

The palm fronds are also saved in many churches to be burned and used as the source of ash used during Ash Wednesday rites the following year.