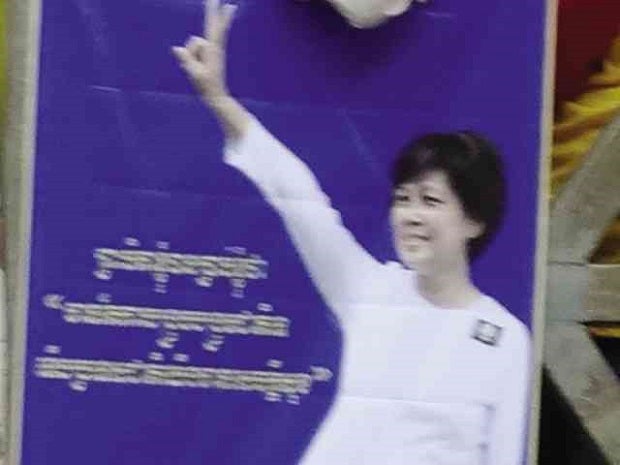 THE ROYAL Princess is a candidate

Joe de Venecia, or JDV as people call him, is a man before his time. While many perceive JDV as a politician, those who know him outside of the political arena appraise him differently.

They see a learned, eloquent statesman who loves history and can give dates for every event, a man with a clear mind and a quick smile who keeps abreast of the times.

JDV has a genuine passion for his country. This became more evident to me when he invited my husband, former Ambassador to Spain Lani Bernardo, to be one of the international observers in the just-concluded Cambodian elections.

I came along for the ride, as Cambodia and the fabled Angkor Wat have, for some time, held a fascination for me. We visited Siem Reap and Angkor Wat, and then took a plane to Phnom Penh, the Cambodian capital.

JDV was already in place and in charge of the entire contingent of international observers. As a former speaker of Congress and head of the Lower House, JDV has international recognition and stature. He is looked upon most favorably, and is deferred to with much respect.

He is the founding president of the Centrist Asia-Pacific Democrats International and the founding chair of the International Conference of Asia Political Parties. He single-handedly assembled 60 delegates in Cambodia from Asia, Europe, the Middle East and North America.

From the Philippines, aside from Ambassador Bernardo, respected journalist Bel Cunanan attended. Her husband was Ambassador to Cambodia in 1998 and reopened the Embassy in the Cambodian capital, which closed as a protest under former Ambassador Rogelio de la Rosa in the mid-’70s due to the genocidal Khmer Rouge government.

Francis Manglapus, as president of the Christian Democrats in the Philippines, actively participated, as did JDV’s wife Gina de Venecia. She is the congressional representative of her district in Pangasinan. All in all, the group was cohesive, cooperative and eagerly took to the task of unbiased observation.

There is a ruling party of Cambodia, the Cambodian People’s Party (CPP), headed by strongman and longtime Prime Minister Hun Sen (28 years in power, with intentions to stay for yet another decade). There was a clamor that the 5th Parliamentary elections be opened to observers to ensure that they be as clean and fair as possible.

There is an opposition figure in Cambodia today, a man who speaks against the present regime. He accuses them of being corrupt, staying too long in power and too close to China. It is no wonder this party is called the Cambodian National Rescue Party.

This party is the strongest contender against the CPP headed by Hun Sen. Embodying the opposition is a man called Sam Rainsy, a charismatic, ascetic-looking man with glasses, and a huge following. In exile for a long time, he was allowed to return, but due to a lack of residency he was disqualified from running.

Nonetheless, his party won additional seats in Parliament. They feel that they have been cheated, however. The CPP won 68 seats and the National Rescue Party 55 seats. But to the opposition, this was unacceptable. The opposition is describing a voter’s registration process in which more than a million people were unable to vote. Familiar?

Oh yes, there was an air of familiarity as we visited polling places. First, Cambodians and Filipinos look alike, so it was like visiting provincial polling places and seeing Filipinos. The classrooms look just like ours, and the lists on the walls and cries of disenfranchisement gave me a feeling of déjà vu. When the actual counting begun, it was just like home—manual and with sticks! I’m talking of elections prior to the present-day machines here.

There is a third party in Cambodia called the Funcinpec. The candidate they fielded was the youngest daughter of the late King Norodom Sihanouk, Princess Norodom Aru Ramsey. Prince Ranariddh, son of Norodom Sihanouk, was declared “co-Prime Minister” together with Hun Sen in the 1990s.

The party, however, lost significance when Prince Ranariddh succumbed to the charms of a beautiful Cambodian cultural dancer. Ranariddh lost his wife and position, and distanced himself from Cambodian politics. I dare to venture that he is probably infinitely happier in the arms of his love. His younger brother Prince Sihamoni reigns as a figure of royalty in Cambodia. He is the son of Sihanouk and the beautiful Italian-Cambodian Queen mother, Monique.

We visited the Queen. Again, JDV was received as a dignitary. We found out that because she is in mourning for the late King, the Queen hardly receives visitors in her home within the Royal Palace compound. JDV and Gina were given an audience. We were included in the party.

How regal and very composed this queen was. Even as she tried to hide it, the pain for her loss was evident. She served tea, gave us gifts and exchanged notes with Gina de Venecia over the loss of a child. She, too, had lost a son as Gina lost a daughter, KC. Gina gifted the Queen with a painting of butterflies. To Gina, KC lives in on in butterflies, she said. The Queen nodded knowingly.

The pictures of this story will show you how the delegation organized by former Speaker Joe de Venecia gave back. Quietly and with a sense of commitment, JDV brought everyone together as a unit.

He shared a talent that he has developed through time—a distinct savvy for harnessing the right people. This time, for Cambodia, it was to help a neighboring country in its efforts toward political stability and recovery.

For JDV at that moment in time, I recall something I read and jotted down: “The greatest good you can do for another is not just share your riches, but to reveal to him his own.”—Benjamin Disraeli.