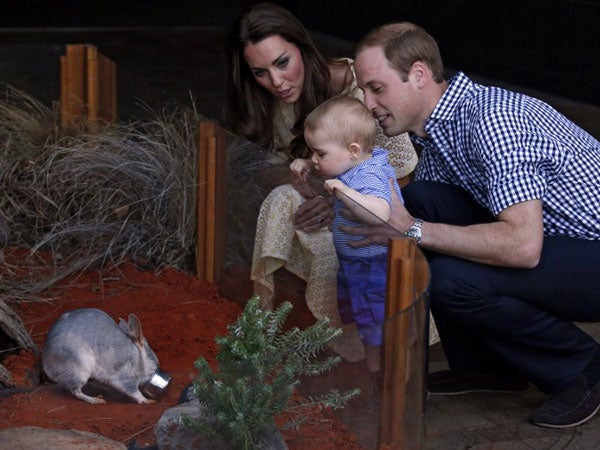 Catherine, the Duchess of Cambridge (L), and her husband Britain's Prince William (R), watch as their son Prince George looks at an Australian animal called a bilby, which was named after the young prince, during a visit to Sydney's Taronga Zoo on April 20, 2014. Britain's Prince William, his wife Kate and their son Prince George are on a three-week tour of New Zealand and Australia. AFP

SYDNEY — Britain’s baby Prince George stepped out in public for the first time in Australia with his parents for a wildlife encounter at Sydney’s Taronga Zoo.

George, eight months old and third in line to the throne after his father Prince William, stole the show as his parents toured the harborfront animal park, which overlooks the Opera House and Harbor Bridge.

The royal family were at the zoo to visit an enclosure for bilbies and meet one of the rabbit-eared native marsupials — named in George’s honor.

Dressed in a blue striped shirt, blue shorts and black shoes, the infant prince wriggled excitedly out of Kate’s arms as they neared the habitat to get a closer look.

He cooed as William fed his bilby namesake and stroked its head, craning over the top of the enclosure’s glass wall.

Propped up by his mother, George bobbed jubilantly up and down and waved his arms as the inquisitive bilby, previously known as Boy, crouched up on its hind legs and peered over the edge at him.

He grinned and giggled for the cameras as William bounced him in his arms and kissed him on the head, beaming as he was presented with a stuffed toy bilby which he promptly tossed to the ground, setting off ripples of laughter in the capacity crowd.

George held fast to the ear of a silver bilby statuette as the Duke and Duchess of Cambridge unveiled a plaque in his honor. The enclosure was paid for by the Australian government as a gift on behalf of the nation to celebrate George’s birth.

It was the young royal’s first public appearance in Australia, five days into the family’s 10-day tour of the nation of which William’s grandmother Queen Elizabeth II is head of state.

He had just one formal engagement during their visit to New Zealand last week, at a play date with a group of local toddlers.

George left the zoo after his bilby encounter while his parents stayed on to feed a selection of animals including a tree kangaroo and giraffe and take in a sunset bird show in the outdoor amphitheater.

Earlier, William and Kate attended an Easter Sunday church service at Sydney’s St Andrew’s Cathedral and signed a bible brought to Australia by the First Fleet of European settlers in 1788.

It is widely acknowledged as the bible used in the first Christian service ever held in Australia.

William’s parents Diana and Charles signed the rare edition during their visit to Australia when he was a baby in 1983, as did his grandparents in 1954.

The young family leave Sydney on Sunday night for Canberra, where they will be taking a rest day before moving onto Uluru, an iconic desert monolith sacred to Aboriginal Australians.