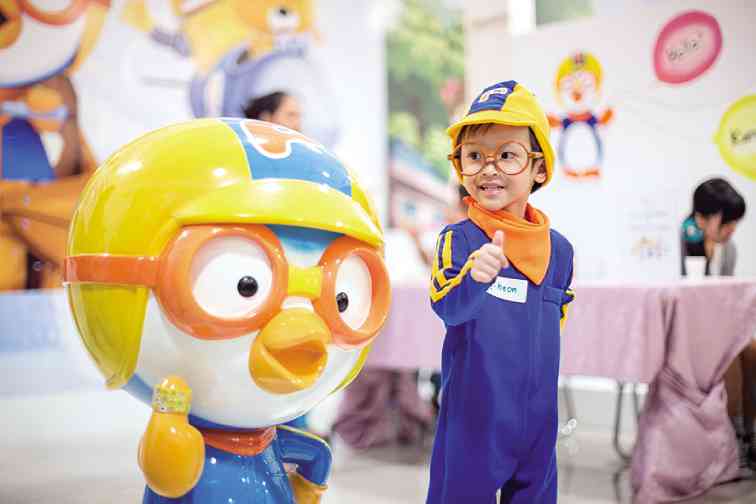 IF PORORO the little penguin were real, he would be of this exact height— approachable and child-friendly. PHOTOS BY JILSON SECKLER TIU

There is an exhibit in town where the pieces on display, sans enclosed glass shelves and dim lighting, not only beg to be photographed, but also to be touched, cuddled, played and tinkered with.

“Korean Character Exhibition: The Delight of Korean Animation Character World,” ongoing until May 10 at Korean Cultural Center in Bonifacio Global City, presents media and merchandise based on six of the latest TV animated series made in the Land of the Morning Calm—“Pucca,” “Canimals,” “Pororo the Little Penguin,” “Hello, Jadoo,” “Tayo the Little Bus” and “Cloud Bread.”

If you’re unfamiliar with any of the series, ask the kids in the family or tune in to cartoon channels on cable TV. You’re bound to discover 10-year-old Pucca and her funny experiences about unrequited young love, or discover the unique perspective of the Canimals whose half-animal, half-soda-can figures make the simplest deeds a Herculean effort.

Daily life is the theme shared by the stories of girl-next-door Jadoo and her family, as well as the little penguin Pororo and his animal friends who live in the sunshiny village of a secluded forest.

The adventures of the little city bus named Tayo will take you through Seoul’s metropolitan transit system while “Cloud Bread” depicts the life of the feline family that acquires the ability to fly after eating home-baked puffy buns.

“Korean Character Exhibition” has a setup that resembles large photo booths, each dedicated to an animated program and demarcated by oversized character wall prints or tarpaulin posters. Perched on tables, wall shelves and white wooden boxes of varying height are iterations of the animated characters. The variety is enough to rival the merchandise of the world-famous mouse and the white kawaii kitty.

The most appealing, though, are the less functional variety—decorative figurines, plushies, big stuffed toys, dolls and other kiddie paraphernalia like pop-up activity kits, dollhouses and indoor play tents. It is, in modern-day terms, “cuteness overload” and you would be tempted to reach out and pluck items from the display.

None of the merchandise is for sale, which for us is a downer, but exhibit curator M.J. Keum, a mainstay at Korean Cultural Center, says the agency is willing to be a bridge for the Korean distributors and individuals or companies that show interest in marketing the products locally.

The exhibit, says Keum, touches only on a small spectrum of the character merchandise available in Korea.

The actual product range spans the gamut of everyday items adults could actually use, such as cooking pans, bed covers, room décor and bath items like liquid soap dispensers. Clothing collections have even been designed exclusively for global brands like Benetton, which annually parades new designs on the runway.

The popularity of Korean animation, which has been exported to over 120 countries, is a phenomenon that took shape after a lot of hard work and struggles.

The industry is less than 50 years old—relatively young compared with leading regional and Western counterparts.

According to “K-Animation Befriending Children All over the World,” one of a series of books about Korean culture, the industry has roots in subcontracting projects and, until the ’90s, was considered “a harmful, low-level medium for children.”

In the latter part of that decade, as the Korean government began to fully support the sector, K-animation increased its market share and became appreciated for its cultural content.

It turned out that subcontracting had its benefits, allowing Korean animators to advance the industry’s technology and develop a fresh design perspective.

The animated characters on exhibit are among the products of the K-animation renaissance. Their sophistication is evident, from the cut-out animation of “Cloud Bread” to the pop of color in “Pororo the Little Penguin” or Pucca’s easy-to-draw features (i.e. a child can draw the character in a few strokes).

There’s logic in the design aesthetic and storylines, too.

“Korean animation characters have more friendly and soft characters, not like those from America or Japan,” says the curator. “Our characters are quite small. The Pororo statue (in the exhibit) is the actual size and, psychologically, that [height] is very familiar and friendly to kids.”

The storyline focuses on universal themes, or cultural similarities worldwide, according to the K-animation book. Stories try to reflect everyday life which kids can easily digest and appreciate, instead of overly childish or unrealistic content.

These cultural values may not all be apparent in “Korean Character Exhibition: The Delight of Korean Animation Character World,” but, at the very least, those of us who enjoy the industry’s aesthetics get a taste of this significant piece of the Hallyu wave.

Guided tour and activities facilitated by the cultural center can be booked for groups of at most 15 children. Call 5551711 or 5551709. Visit http://phil.korean-culture.org