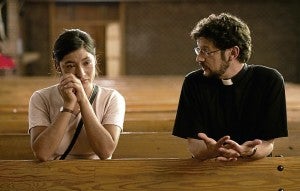 A flower, a letter, a puzzle—these are three important images in “Amador” (2010; one of the films featured in this year’s Pelicula), a quiet Spanish film about Marcela (Magaly Solier), a Peruvian immigrant who wishes to leave her partner Nelson (Pietro Sibille), but is forced to stay because of her unexpected pregnancy. To help her partner make ends meet, she works as a caregiver.  She bonds with the old man Amador (Celso Bugallo) quite well, but he dies so soon that she faces a dilemma: How can she keep the truth from Yolanda (Sonia Almarcha), her employer, so that she won’t lose her summer job?  For a number of weeks, she brings the dead man flowers, sprays the condo unit with air freshener to keep it from smelling bad, enlists the help of the hooker Puri (Fanny de Castro) who used to give the old man a hand-job every Thursday, and goes on with her routine as if he were alive.

The film is true to its theme:  Life is a jigsaw puzzle.  This is the lesson the young Marcela learns from the wise Amador who says:  “Before you’re born, you’re given all the pieces. You don’t know you have them, but they’ve been given to you, and it’s your job to put all of them together.  That’s life.”

Soon, Marcela takes on the task of completing the old man’s puzzle—and this is symbolic of how she starts putting the pieces in her life together. She realizes what she really wants to do with her pregnancy, with her boyfriend, and with her life.

Like a puzzle, the film plays with enigmas (e.g., the strange occurrences in Amador’s flat, and the nature of Nelson’s relationship with Gladis) just as much as it is also filled with secrets: Amador’s death, which only Marcela and Puri know; Marcela’s pregnancy, which Nelson has no knowledge of; Amador’s love for Adela; Amador’s weekly sessions with Puri; and Yolanda’s role in the film’s denouement.

The film is likewise replete with humorous and ironic moments, especially Marcela’s conversations with Puri (whose name sounds like puro) and the priest. The pairing of Puri and Marcela is quite remarkable: the hooker and the immigrant, two tough women from the margins of society, forging a beautiful friendship. Puri gets to ask Marcela an interesting question: How different is a hooker who sells her body from a caregiver who pretends her master is alive to keep her job? Another funny line in the film (and ambiguous, too) comes from Amador, who asks Marcela why clouds exist. The answer, according to his anarchist-friend, is this: “God would hide behind the clouds when He’s ashamed” (take note of the film’s recurring shots of the immense clouds).  Of course, the biggest irony in the film is how the dead can “sustain” the living, and this perplexing point is rendered most forcefully at the film’s end.

“Amador” is also a commentary on the plight of immigrants in Spain, how they view themselves, and how the locals view them, especially on matters related to jobs. The film’s exploration of this issue begins with the prologue where Nelson and his group of flower “thieves” exchange insults with the security officers. We hear about the immigrants on the TV show Marcela watches, in the exchanges in Nelson’s apartment-cum-flower-shop, and in Marcela’s conversations with Amador and Puri.  These details not only function on the thematic level but also make Marcela a complex character, which Magaly Solier’s nuanced performance successfully brings to life.

Indeed, one of the film’s strengths is its ensemble. The commendable performances from Magaly Solier, Celso Bugallo, Fanny de Castro, Pietro Sibille, and Sonia Almarcha make the film bizarre, funny and moving.

It is a deliberate choice for the director and screenwriter Fernando León de Aranoa to make the events unravel through a letter and a picture, which both strengthen the film’s central theme and image (life as a puzzle).  In the first scene after the prologue, Marcela writes a goodbye letter to Nelson and leaves, only to return because of her pregnancy and the man has no knowledge at all of everything that has just happened; more than halfway through the film, Marcela discovers a few things through a cut-up photograph; and in the film’s penultimate scene, Nelson puts the pieces of a torn letter together, the same letter Marcela wrote earlier. It is no coincidence then the film’s opening image is a single flower on top of a hill. This image is a good foreshadowing of the film’s denouement, which is also reinforced by the changes in the words/letter magnets stuck on the refrigerator (from “Marcela” to “Marcela’s flowers” to “flowers”). At the end of the film, only the word “flowers” remains, signifying Marcela’s awakening and her choice to be free.

Still on flowers, the film makes a clever analogy between human beings and flowers.  In the exposition, one character utters: “Flowers are the only things that stay pretty after they die.”  In the denouement, another one states: “How can something that isn’t alive be so beautiful?”  To this remark, Marcela replies, “Like flowers.”  There is also a grain of truth in Nelson’s observation about human existence:  “There are only three things that matter in life:  love, life and death. And all three are celebrated with flowers.”

In the final scene in the park where Marcela tells Puri that she has already chosen a name for her baby, we get a feeling we know the name, and we know what the naming signifies. With the use of puzzles, letters and flowers, the film tells us that although Marcela’s future may still be a question mark, she is certain about one thing (and she learned this from the old man): The fragments of an individual’s life are to be pieced together by the Self alone.

By turns puzzling and meditative, humorous and poignant, Amador is quite impressive—and liberating.

Ronald Baytan is a teacher, poet and critic.