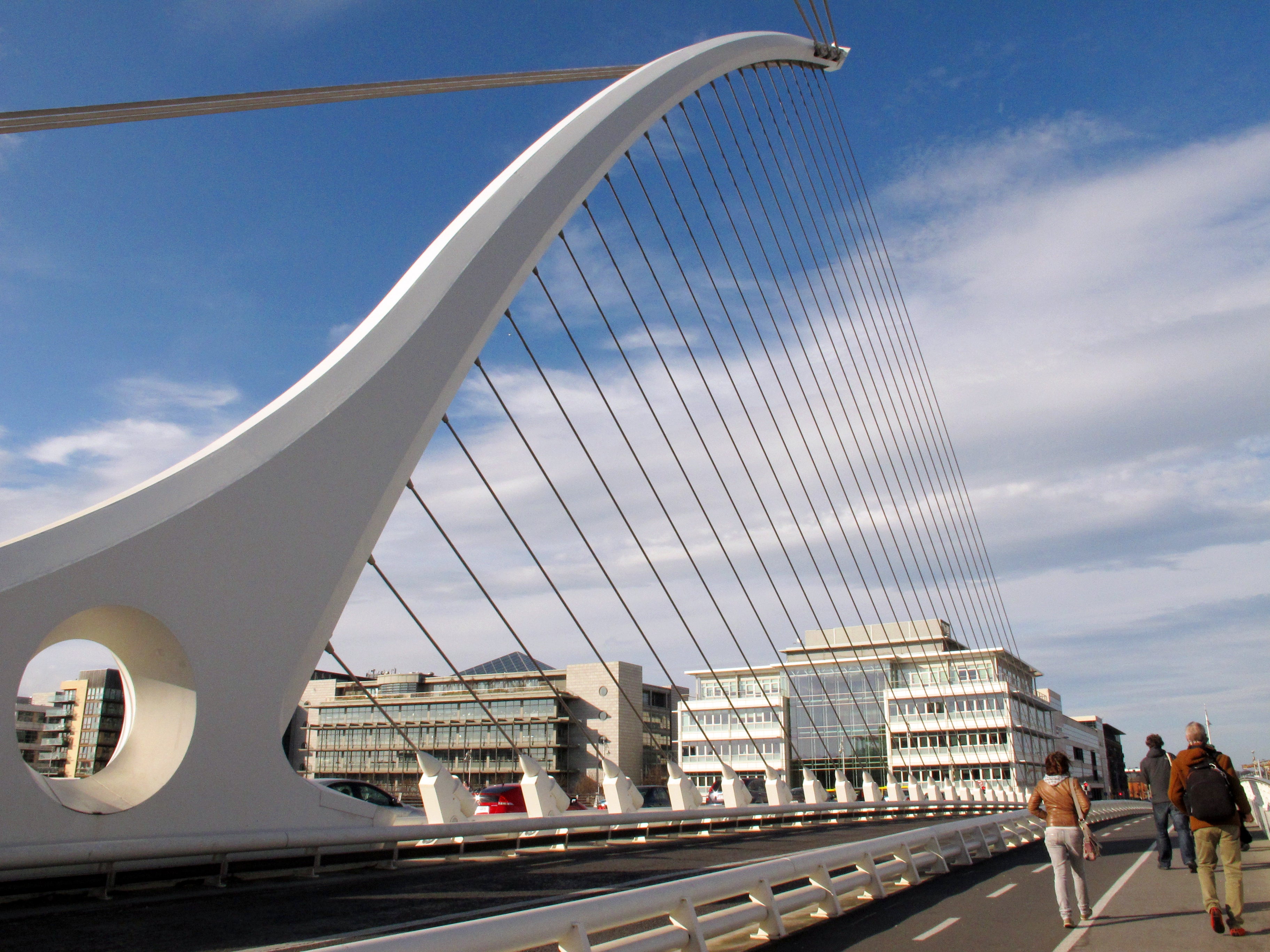 This March 14, 2014 photo shows the Samuel Beckett bridge across the River Liffey in Dublin, Ireland. The bridge is designed to evoke the image of a harp lying on its side. Many famous writers were born or lived in Dublin and the city is filled with plaques, statues and bridges commemorating them. AP

DUBLIN— James Joyce immortalized this misty port city in his literary epic “Ulysses,” though many Dubliners freely admit they haven’t read a word of the stream-of-consciousness novel. That doesn’t stop them from throwing a huge celebration every June 16, honoring the day in 1904 when the fictional Leopold Bloom perambulated through the streets of the author’s hometown.

Every year, thousands of Joyce lovers and tourists, many in period costume, flock to the capital to retrace Bloom’s steps. The faithful devour “innards of beasts and fowls” for breakfast, plunge into the once-famous gentlemen-only bathing spot called the Forty Foot, and descend on Davy Byrnes’ pub for that famous literary lunch: a gorgonzola sandwich and glass of Burgundy.

But while Bloomsday is the city’s largest and most colorful literary celebration, it is hardly the only one. With its old-world pubs filled with faded pictures of poets and rebels, clattery cafes and cobblestone alleys, centuries-old libraries and elegant museums, Dublin is a haven for those who want to immerse themselves in books and writers and words — washed down of course, with the obligatory pint of Guinness. (The old brewery storehouse on the banks of the River Liffey is a major tourist attraction.)

If there is a pub on every corner — Dublin boasts around 1,000 of them — it seems there is a poet too. There are statues, busts and plaques commemorating writers, and pubs and restaurants filled with literary references. Literary-themed walks transport visitors to the worlds of Joyce, Shaw and Wilde. Even the city’s newest bridges are named after writers — Joyce, Samuel Beckett and Sean O’Casey.

A life-size, colorful stone statue depicts Oscar Wilde lounging languidly on a crag in the park at Merrion Square. Joyce is depicted rather more severely in bronze, leaning on his cane as he strolls down North Earl Street. And tourists love to pose for photos sitting next to sculptures of two writers seated on benches: Brendan Behan by the Royal Canal and Patrick Kavanagh by the Grand Canal. “O commemorate me with no hero-courageous tomb,” wrote Kavanagh, “just a canal-bank seat for the passer-by.”

“Walking through this city is like stepping back into a novel,” exlaimed Rohini Srinibasan, a Joycean scholar from Cincinnati after a recent day of sightseeing with her husband. “It’s like reading Joyce or Shaw all over again.”

“There’s great history and storytelling and characters in these streets, and it’s a city of words and writers all right,” said Colm Quilligan, author of a book about literary pubs. But, he pointed out, “for a long time, we weren’t always that kind to them.” Joyce and Beckett, for example, emigrated to continental Europe, while Yeats relied on benefactors to pay his bills.

Quilligan hosts a lively literary pub crawl that introduces visitors to The Bailey, The Brazen Head, The Bleeding Horse and other watering-holes frequented by writers or featured in their works. Actors re-enact passages from Joyce, Beckett, Wilde — “I have nothing to declare but my genius” — and Behan — the self-confessed “drinker with a writing problem” — as visitors sip their Guinness and soak up history.

The tour begins in the 19th century Duke pub with actors reciting from Beckett’s “Waiting for Godot,” which one Irish theater critic famously described as “a play in which nothing happens, twice.” It moves to the cobblestone quad in Trinity College, where visitors learn about writers who studied there — Swift, Beckett, Stoker, Wilde and others — before meandering through more pubs and prose, ending at Davy Byrne’s.

If Dublin seemed a bit indifferent to writers in decades past, it has more than made up to them now. Designated a UNESCO City of Literature in 2010, Dublin hosts literary festivals and celebrations throughout the year. Every April, for example, the city hosts a reading initiative called “one city, one book” encouraging everyone to read a book connected with the capital.

The Dublin Writers Museum — a beautifully restored Georgian mansion on Parnell Square — is filled with books, letters, portraits and personal belongings of famous scribes. Next door, the Irish Writers’ Centre offers a peaceful sanctuary for writers in stately old rooms filled with books and artwork.

There’s a James Joyce Centre in the city, but true Joyce lovers take a half-hour train ride south to Sandycove to visit the stone tower featured in the opening scene of Ulysses, now a Joyce museum. The 19th century Martello tower — just reopened after a renovation — was one of a series built along the coast to withstand an invasion by Napoleon. Joyce stayed here briefly, and the gun platform, with its panoramic view of Dublin Bay — “warm sunshine merrying over the sea,” as well as the living room, are preserved as he described them in “Ulysses.”

Nearby Sandymount, a pretty seaside town, was the birthplace of William Butler Yeats, a giant of 20th century Irish literature and winner in 1923 of the Nobel Prize in literature. Three more Irish writers won the prize: Shaw, Beckett and Heaney.

Dublin is also home to fabulous old libraries like the one in Trinity College, home to the Book of Kells, a Latin version of the four Gospels written 1,200 years ago and considered one of the most beautifully illustrated manuscripts in the world.

The Chester Beatty Library houses the elaborate collection of the 20th century American mining magnate, including many priceless Islamic and Far Eastern manuscripts and artifacts.

And then there Marsh’s Library next to St. Patrick’s Cathedral, the oldest public library in Ireland. Built in 1701, it is a beautifully preserved, old-world treasure of dark oak bookcases filled with 25,000 books and manuscripts dating back 500 years.

“Step to the 18th century,” cries caretaker Peter Logue, as he opens the door. Indeed, it’s easy to imagine Jonathan Swift, dean of St. Patrick’s, sweeping past the bookcases, or penning his satires with a quill in one of the elegant wired alcoves where “graduates and gentlemen” were locked in with rare books.

Outside the modern city bustles. Inside, there is just the ticking of an antique grandfather clock, the musty smell of ancient leather and all around, the ghosts of scholars and writers past.